WHEN Frankie Sandford and Wayne Bridge first met, on a boozy night out in December 2010, both were battered and bruised by fame.

Saturdays singer Frankie, 32, had just been through a messy and painful break up with McFly’s Dougie Poynter, in the full glare of the spotlight. 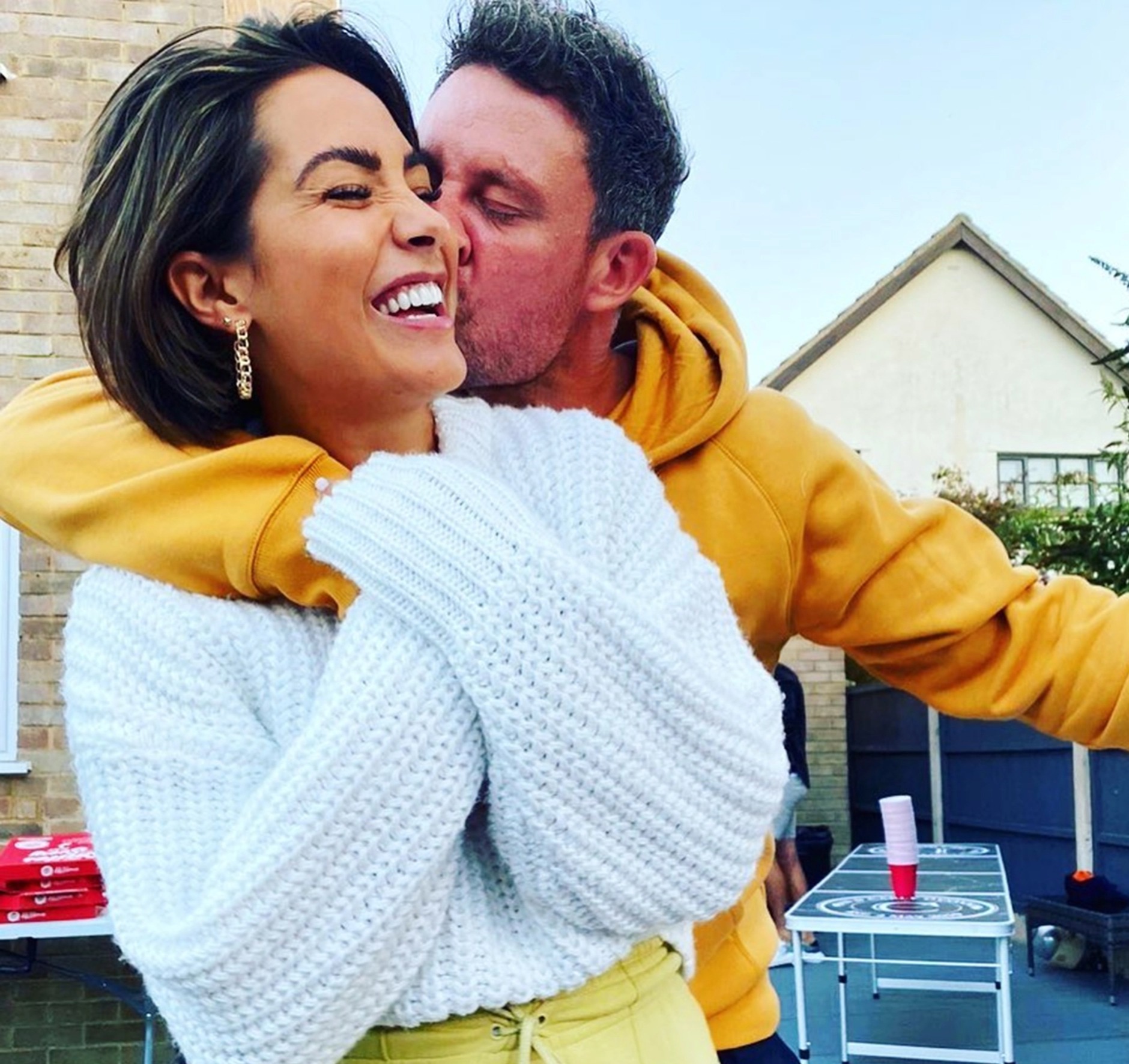 Footballer Wayne, 41, meanwhile, had seen his own love life splashed over the papers the year before.

“They’d both been through the mill,” a source close to the couple told Fabulous.

“They both recognised that in each other. When they met, they already felt connected.”

From their very first date, the pair have been inseparable.

They married in 2014, and have two children, Parker, eight, and Carter, six.

Now, as Frankie prepares to confront her worst fears in this year’s I’m A Celebrity, we take a look back at their relationship and find out what makes it tick.

James Corden might seem like an unlikely Cupid, but he matchmade Frankie and Wayne on that December night out.

In the 2016 series of I’m A Celebrity, Wayne revealed, “[James] got her phone, put my number in it. And then put her number in my phone.''

“And then we basically texted a little bit, and just ended up going for dinner.”

The new relationship progressed at a rapid pace.

In early January 2011, the pair was first snapped renting a DVD, then at a pub near Wayne’s mansion in Cheshire.

A couple of weeks later, Frankie introduced Wayne to her mum and dad over dinner at Hakkasan. 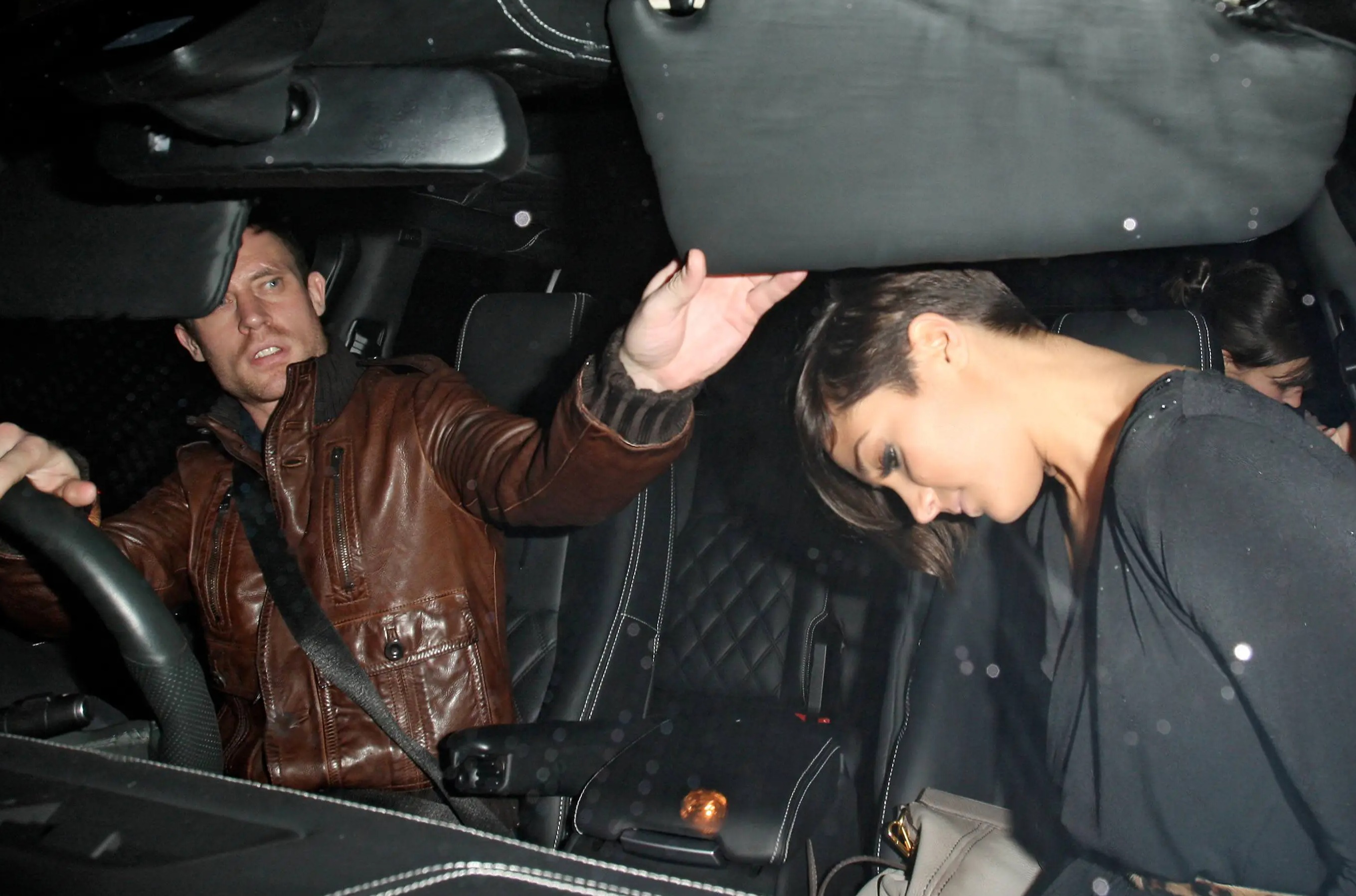 Frankie has called it a “whirlwind” and our source told us: “It was a sign they both knew it was incredibly serious early on.”

The only fly in the ointment was the continuing fallout from her relationship with Dougie, who checked into rehab after her romance was made public.

His mum Sam Moody complained: “'It's like a kick in the teeth, it's devastating. It's horrible.''

“It's just in your face all the time and that's what he's got to learn to deal with.”

Inevitably, Frankie and Wayne were dubbed the new Posh and Becks – she a member of a top girl group, and he one of England’s star players.

However, our source says: “The reality couldn’t have been further than the truth.''

The fact is one of the things that drew them together is that they loved being homebirds and curling up on the sofa.

They were each other’s refuge from the limelight. 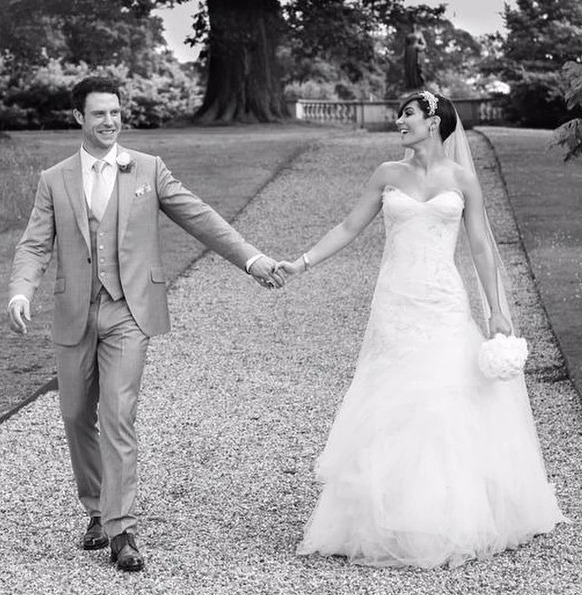 “Both of them are sensitive souls – they have similar personalities and similar insecurities.”

At the time, Frankie said: “Wayne’s quite a private person.

“He doesn’t really like getting papped and we don’t go to all the football parties or anything.''

“He’s got all his friends from home and so do I.”

Their star-studded 2014 wedding at Woburn Abbey was kept mainly under wraps, too, with the couple turning down mag deals.

One thing’s for sure – the spark that was there at the beginning of their relationship is still burning very bright.

Our source revealed: “In the early stages, Wayne kept himself to himself, and was
uncomfortable talking about his relationship with Frankie.''

“But it’s a sign of how secure he is now that he’s happy to share intimate secrets about his wife, and how much he still fancies her.”

In the jungle, Wayne revealed sex was a daily occurrence in the Bridge household and earlier this year he revealed: “She still makes me stand to attention.” 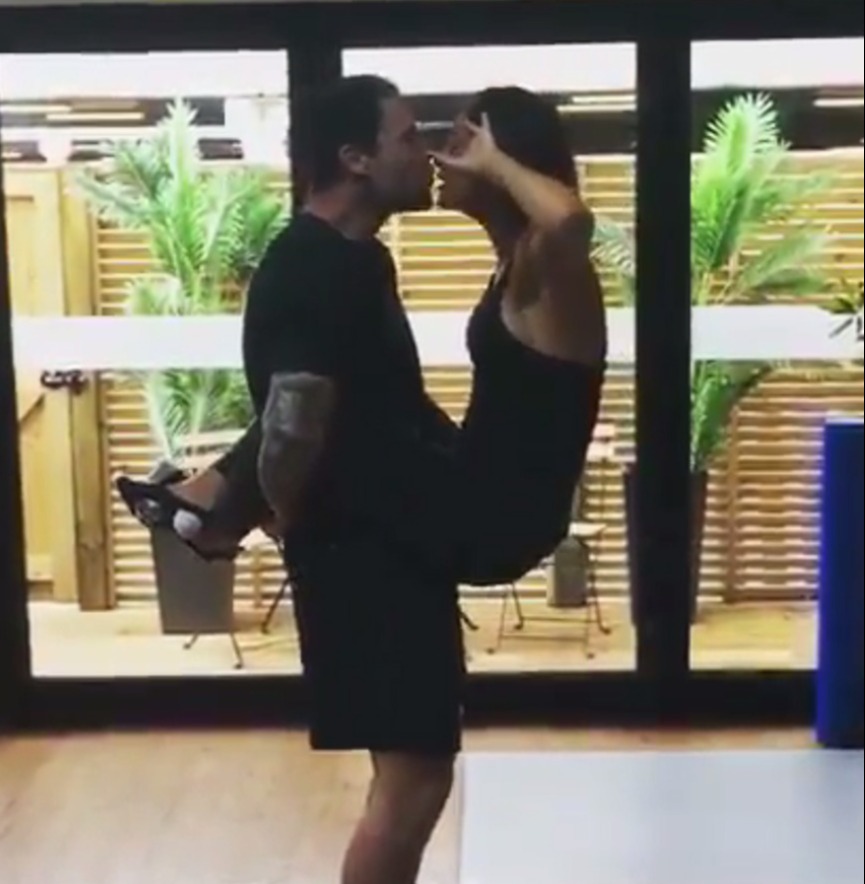 But like most couples, the pair have found as their kids get older they have less private time, with Wayne confessing lockdown was also a struggle.

“Bedtime’s become harder so [sex] has become a daytime thing.''

“But that’s also been quite tough because of home- schooling.”

Frankie enjoyed the extra family time, however, confessing: “Having the excuse to slow down together and spend time together has been lovely.”

Perhaps the oddest thing about Wayne and Frankie’s relationship is the fact his parents Wendy and Mick live with them.

“Everyone is obsessed with them living with us, but I don’t know any different.''

“They’ve not always lived with us, but they’ve always been around,” said Frankie recently.

The Bridges’ Surrey mansion is a little roomier than most, but even so Frankie confessed: “Obviously we all get on each other's nerves sometimes." 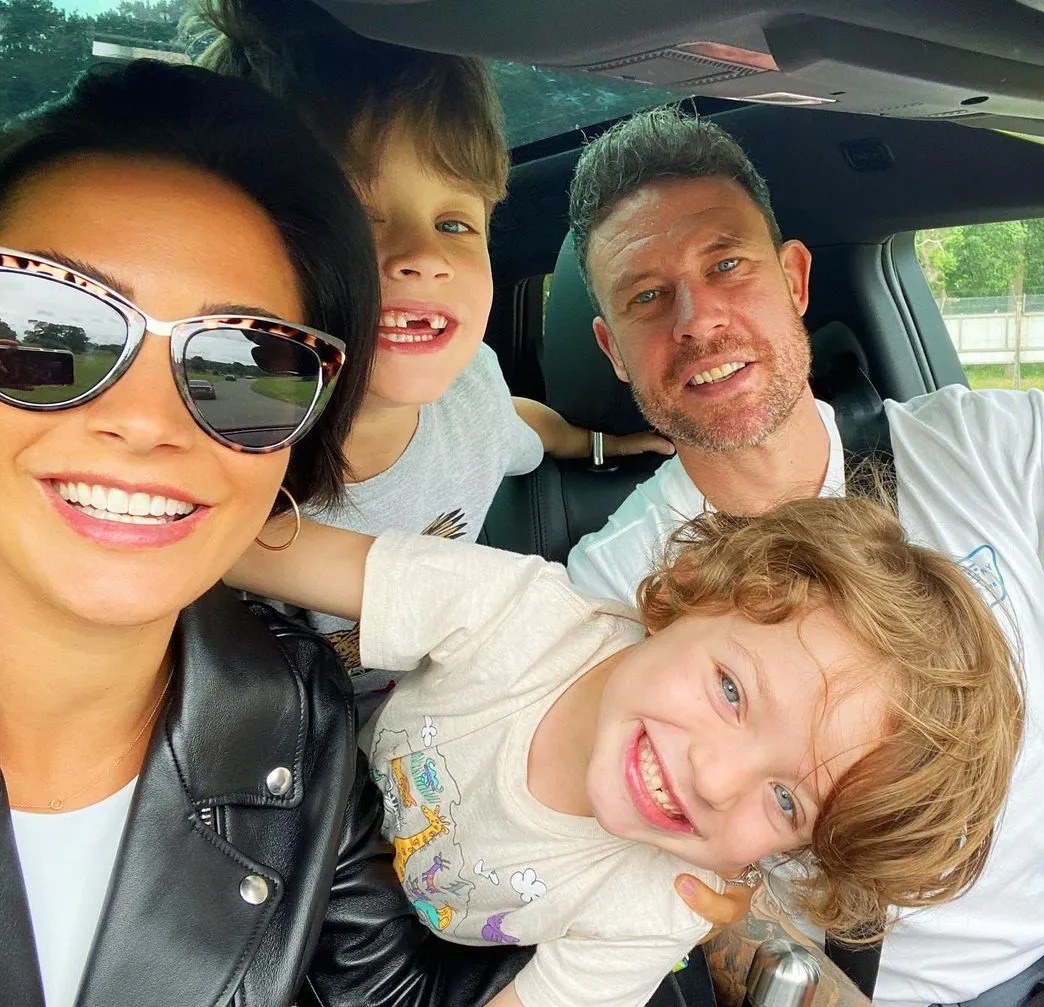 But the dedicated mum also admits the unconventional set up works because she feels less mum guilt when she goes out.

“They have a great relationship with their grandparents and my guilt when I leave them is a lot less.''

“My nan and grandad looked after us when I was young while my parents worked,” she said recently.

Our source told us: “It’s yet another example of why Frankie and Wayne are so well-suited.''

Both Frankie and Wayne have spoken openly about their battles with a lack of self-confidence.

The Saturdays star famously has “Sunshine ‘n’ showers” tattooed across her back, which was the nickname her grandmother had for her, and a nod to her long-running battle with anxiety and depression. 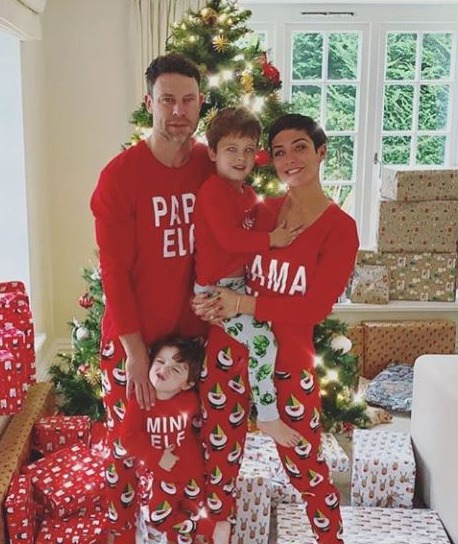 She’s documented her story in two books, Open and Grow, and recently told
how Wayne helped her in the early days of their relationship.

“It was a lot for him to take on, but he really made the effort to learn what was going on, stayed in touch with my doctors and tried to understand as best he could.''

Our source said: “Frankie’s books have been very well received by the public.''

“That’s encouraged her to be even more open and honest about her life, and she feels that now is the right time to confront her fears further on I’m a Celebrity, with Wayne’s full support.”

“Feel the fear and do it anyway” will be her motto, the star said last week.

There’s no doubt that reality TV has helped Wayne find his feet and get his self-confidence back after a difficult end to his career.

The footballer was just 33 when he retired after just 12 games for Reading, shortly before his wedding to Frankie, and became a stay-at-home dad.

He came fifth in I’m A Celeb, but winning 2019’s Celebrity SAS: Who Dares Wins really gave him his mojo back.

A source on the show said: “He was a powerhouse from the beginning, and put everything on the line for his own self-esteem.''

“He didn’t even care about the cameras, it was all to prove something to himself.”

Now it’s Frankie’s turn to brave the physical challenge of the Welsh castle, and Wayne’s number one piece of advice is sure to be “keep it real”.

Our source said: “It’s worked for him, and he knows the audience warm to people who are there for a reason, not just for fame or the paycheck.”

We’re sure he’ll be behind her all the way!

Tempted to cheat on your partner? Read this relationship expert's tricks to help you resist the urge, including buying a small sofa.

Meanwhile, this woman's date accused her of being a catfish because she was ‘bigger’ than he thought and STILL asked her for sex.

Also, read how our Tinderella went on a date with a man she wouldn't usually choose.