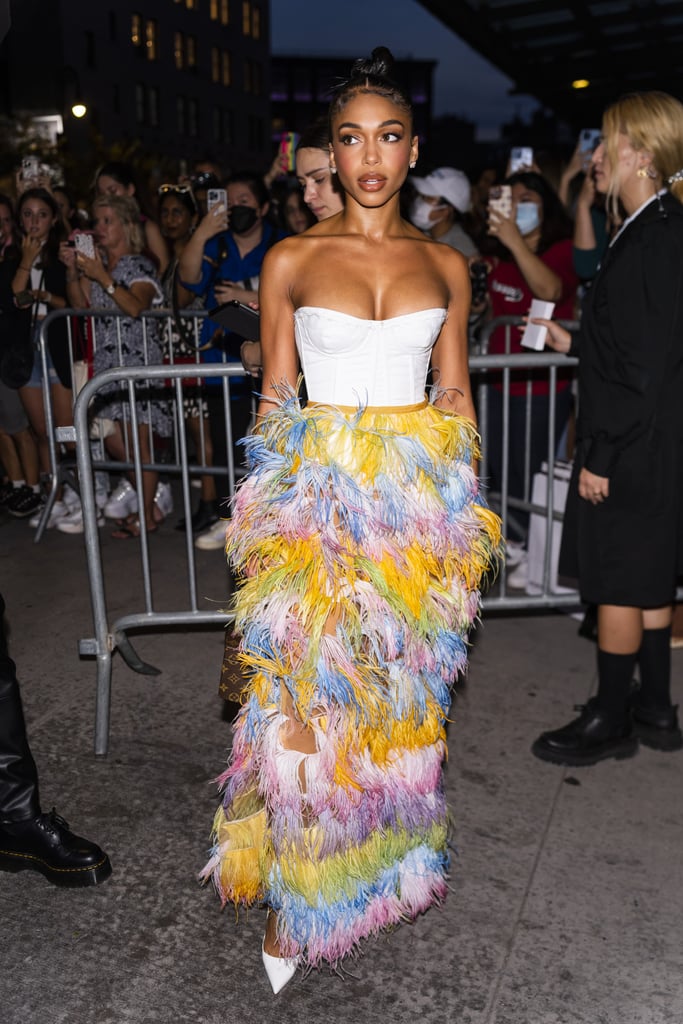 Lori Harvey has been attending Fashion Week shows and afterparties all over New York City. “NYFW – Let the games begin 🎉,” the SKN by LH founder wrote under a recent Instagram post, kicking off what was about to be a week full of noteworthy ensembles that command attention at every turn. Most recently, she brought her sartorial A-game to Vogue World, a live runway show and fashion experience, on Monday, September 12.

Tapping into the lingerie-as-outerwear trend, Harvey dressed in a crisp white strapless corset with a boned bodice that put her cleavage on full display. The multi-hyphenate star balanced out the top with a flamboyant pair of flowy pants that were covered with feathers drenched in shades of yellow, blue, purple, and green. The colorful bottoms moved beautifully as the star made her way to the front row of the event that celebrated Vogue’s 130th anniversary. To finish, a pair of pointy white pumps, a boxy Louis Vuitton monogram bag, and sparkly studs kept her look sophisticated.

The past few days have seen the 25-year-old model donning a series of equally chic outfits. At the Harper’s Bazaar Icons Party, for example, she stunned in a bold white crop top and eye-catching fuchsia ballroom skirt by Christian Cowan. For Fendi’s New York Fashion Week show, she covered up in a gray monogram belted coat worn as a dress. Prior to those two events, she was seen in a metallic green Christian Cowan puffer dress at the Smart Toxin New York Fashion Week kick-off event, then a sheer, black one-shoulder dress at Revolve Gallery.

Harvey is leaving her mark on New York Fashion Week, and she ups the ante with every appearance. Ahead, appreciate her latest.

'General Hospital': How Maurice Benard was 'Blown Away' by On-Screen Son Dominic Zamprogna When He Started