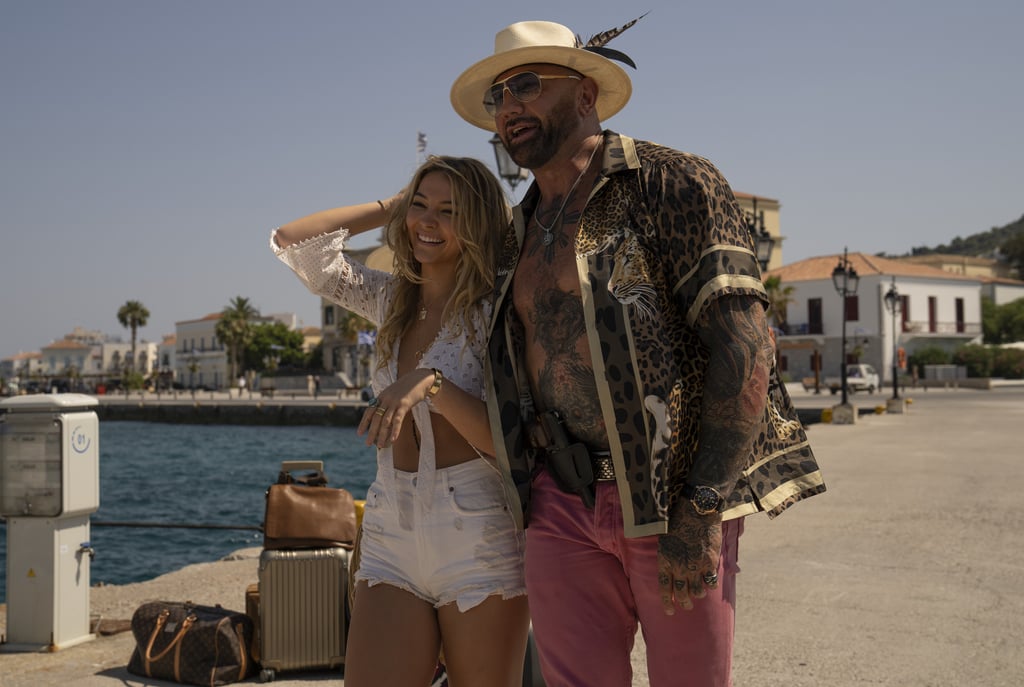 Madelyn Cline broke the internet when she raced into the frame, mascara streaking down her cheeks, in the now-viral Cult Gaia cutout dress in “Glass Onion.” As Whiskey — Duke Cody’s (Dave Bautista) plus-one — her vacation wardrobe is flawless. From her gold bikini to the two-piece wrap set she wears when the group first land on Miles Bron’s (Edward Norton) private island, Whiskey’s outfits paint the ideal image of a festival girl trapped in a murder mystery.

“We were trying to figure out what her background was and who she was and how she was entering this fray of crazies,” the film’s costume designer, Jenny Eagan, tells POPSUGAR. “And we just came to this realization that she was putting on an air.” The definition of Instagrammable, Whiskey’s look gives off a “relaxed, chill, no-worries-in-the-world vibe,” Eagan says. Though she still wants to impress the wealthier and more influential members of the group.

“[Maddie] knows the game she’s playing,” Eagan says of working with Cline. “There’s just this wonderful confidence about her.” Eagan adds that she often gave Cline the freedom to style her own jewelry and have the final say on Whiskey’s accessories. In the end, Cline’s personal sense of style helped solidify Whiskey’s character. “It’s really fun to be able to work with people like that, where they just come in with excitement, knowing it’s going to be so much fun,” Eagan says.

As Detective Benoit Blanc (Daniel Craig) attempts to identify the killer, he hones in on the most suspicious characters like Birdie Jay (Kate Hudson), a supermodel turned fashion designer with a motive. But Whiskey’s free-spirited character, and her equally whimsical wardrobe, turns out to be a key puzzle piece in Blanc’s investigation.

Ahead, read how Eagan selected some of Whiskey’s most iconic outfits and shop similar pieces from Cline’s onscreen wardrobe.

Small plane crashes into a block of flats in Oxfordshire

Who is Emmerdale actress Isabel Hodgins?

A Kentucky man is facing $569,000 in fines after being accused of violating Canada’s COVID-19 rules