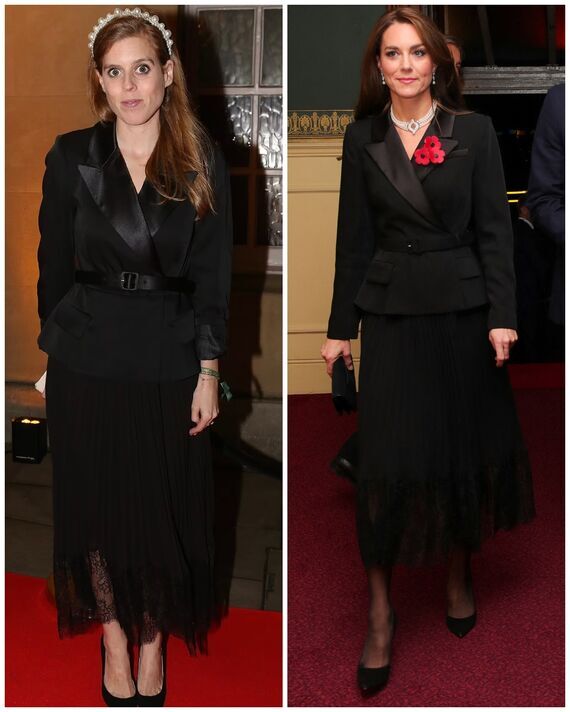 Princess Beatrice, 34, donned one of her favourite Self-Portrait dresses to attend a charity dinner for children living in war zones on Thursday. The mother-of-one attended the fundraiser for Street Child UK in London.

The Princess wore a structured dress, designed to look like a separate black blazer dress with a chiffon skirt.

Beatrice previously wore the dress to attend a vigil for the late Queen just days before her state funeral.

Her £280 Self-Portrait dress, which previously cost £420, was also worn by Kate Middleton last week as she attended the Festival of Remembrance at the Royal Albert Hall.

It has been spotted on Zara Tindall and Lady Louise Windsor in the past.

The description for the garment says: “This midi wrap dress is cut from tailored crepe, chiffon and fine lace.

“Designed with a long sleeve bodice that is fitted at the waist and falls to and pleated midi skirt. This style is lined with a self-fabric belt and pockets.”

Complete with a black silk lapel and an elegant slim belt, the dress, also loved by the Princess of Wales, is designed to look like two separates – with a smart tailored blazer sewn over a pleated midi skirt with lace trim.

The daughter of Prince Andrew and Sarah Ferguson accessorised her evening look with an H&M pearled headband, adding a touch of glamour to the outfit.

The Princess chatted to British boxer Richard Riakporhe as they sat down for dinner at the charity event. Beatrice was also in the company of American activist Erin Brockovich at the Street Child event.

The 34-year-old attended the event for the charity because she has been their ambassador since 2018.

The fundraiser, which brings in hundreds of thousands of pounds for the charity every year, heard from 13-year-old Marsha.

She is from the de-occupied territory of Kyiv Oblast in Ukraine and was forced to flee to Germany earlier this year after Russia’s invasion.

Street Child focuses on keeping children safe in their education despite the horrors going on around them.

Princess Beatrice became an ambassador of Street Child UK in 2018 when the charity merged with Children in Crisis, an organisation founded by Beatrice’s mother Fergie.

Before this, the Princess was an ambassador of Children in Crisis and she spent three years working for the organisation after graduating from University.

At last night’s event, Street Child’s CEO and founder Tom Dannatt said: “Emergency situations, such as the conflict in Ukraine and Somalia, are the scenarios in which Street Child specialises.

“We are able to offer life-saving humanitarian aid within days and support communities to ensure access to learning is reinstated as quickly as possible.

“Our Christmas campaign this year showcases the number of children who will be spending their winter in a conflict zone and the Annual Gala dinner is a powerful launchpad for this campaign. It’s brilliant to celebrate our impact to date but to also showcase the ongoing need for further education in emergency funding.”