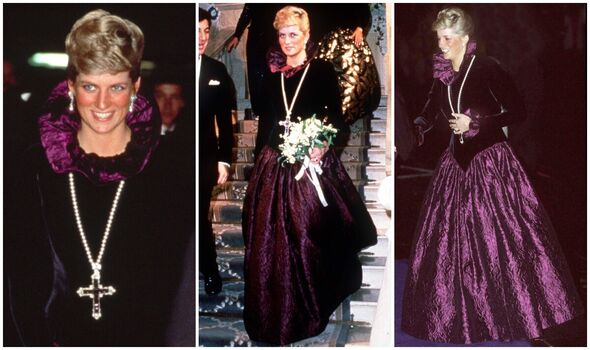 Princess Diana wore many enviable jewels during the 1980s and 1990s, but one of her most “iconic” items was a crucifix pendant encrusted with several precious gems. While Diana owned much of the jewellery she wore, she also borrowed on occasion, and this particular necklace actually belonged to the former group chief executive of renowned jeweller Asprey and Garrard.

In the week a royal necklace worn by Prince Harry is hitting headlines and evoking memories of Princess Diana, royal fans might be interested in the auction of the Attallah Cross pendant which was last seen when it was worn by Diana in 1987.

The auction opens today at Sotheby’s at 2pm UK time and lasts until Wednesday, January 18 at 4:30pm.

Experts at 77 Diamonds, Europe’s largest online diamond jeweller, spoke to Express.co.uk about this iconic jewel and how much they reckon it will sell for at auction.

77 Diamonds managing director Tobias Kormind said: “In the week another royal necklace is hitting headlines and evoking memories of Diana in many hearts, this regal amethyst and diamond cross pendant last worn in 1987 by Diana, Princess of Wales, at the peak of her beauty as she embraced a bolder, more confident style, could attract a flurry of interest.

“This is because of its accessible price point relative to other royal jewels with an illustrious history.”

The expert went on to describe the jewel’s eye-watering value.

Mr Kormind claimed: “The piece has limited intrinsic value because amethysts are not the most precious of gemstones.

“At 77 Diamonds we would charge under £7,000 to remake something in a similar style to this pendant.”

Mr Kormind argues that the high estimate is due to the legacy surrounding the late Princess of Wales.

He added: “I attribute the very high estimate from Sotheby’s to the simple fact that it is a Gerrard jewel from the 1920s which was worn by Princess Diana.

“So few pieces of jewellery worn by Princess Diana to have ever come up at auction.

“Given how topical the royals are at the moment, the auction house could succeed in capturing the zeitgeist around Princess Diana’s legacy.”

However, this is normally the case with any royal jewellery auction according to the style expert.

He opined: “Jewellery with illustrious royal associations has a history of attracting high prices at auction.

“In November 2021, a pair of diamond bracelets hidden by the French Queen Marie Antoinette to keep them safe during the French Revolution, sold at Christie’s Geneva for £7.04million, soaring past the pre-sale estimate.”

The necklace is understood to only have been worn by Diana and, after her death, it was never seen in public again, the auction house said.

Spare: by Prince Harry, The Duke of Sussex

Prince Harry’s highly anticipated and revealing memoir, Spare, launches on January 10, 2023. Available to pre-order now on Amazon, shop to read the gripping story of his life growing up in the royal household.

The jewel was later passed on to Ramsay Attallah, who said: “Princess Diana and my father were friends and I remember that she often came to see him at the historic Garrard store on Regent Street, where his office was.

“She would ask to borrow the pendant on several occasions.

“She really loved the piece.”

As with any of Princess Diana’s jewellery or clothes, the Atallah crucifix pendant is expected to fetch a staggering sum due to its association with the late royal icon.

Shielding Brits under 65 WILL be among first in line for Covid vaccines, confirms Govt

US opens criminal probe of Denmark’s top bank amid scandal