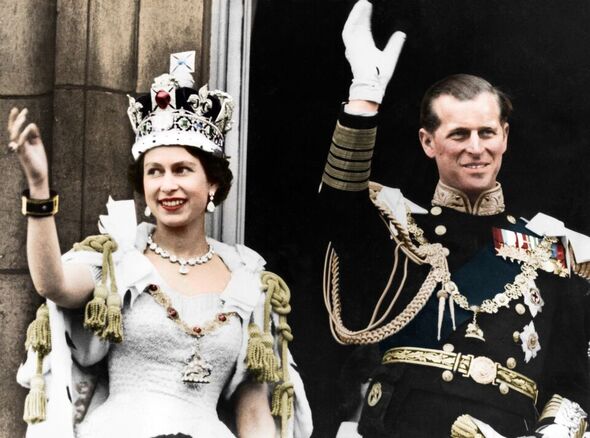 Sir Norman Hartnell was the designer behind the Queen’s fabulous coronation gown in 1953. Although Normal and Elizabeth went through every stage of the dress-making, there was one step the designer hid from his client.

Bethan Holt, author of The Queen: 70 Years of Majestic Style, revealed a piece of the garment that was kept secret from the Queen, but that held significant meaning.

“They went through nine different designs, so the Queen thought that she really knew everything about this incredible piece of clothing,” she said.

“But actually, Norman Hartnell embroidered a four-leaf clover inside the gown as a kind of emblem of good luck on this monumental day for such a young woman.

“You know, it was a huge moment, the coronation, she must have been very nervous. So she probably needed all the luck she could get.”

The dress was embroidered with various flowers, symbolising the national emblems of the nations of Britain.

In amongst the shamrocks, Norman had added a subtle four-leaf clover as a symbol of good luck.

The dress took a lot of hard work to design and make over such a short period of time – it was commissioned eight months before the day of the Queen’s coronation.

It took a team of six embroideresses around 3,000 hours over nine weeks to complete the gown, which was made out of satin, not unlike the monarch’s wedding dress.

The intricate floral design was made from gold and silver thread, as well as pastel-coloured silks, encrusted with pearls, sequins, and crystals.

In Secrets of the Royal Palace, a Channel Five documentary series, art historian Jacky Klein explained how, despite not telling the Queen about it, Norman had hid the four-leaf clover in plain sight on the dress.

She said: “Unknown to the Queen, Hartnell added a secret detail which was a little four-leaf shamrock which he placed on her left skirt just underneath where her hand would be resting during the ceremony.”

According to author Bethan Holt, the designer was present at the coronation and, on seeing his design as the Queen walked through the Abbey, described it as having a “shimmering and sparkling” effect.

Norman reportedly said: “Her Majesty told me graciously that the dress was triumphant.”

It’s not clear when the late monarch found out about the good luck charm on her dress, but it is thought to be after her coronation.

During the coronation ceremony, Prince Philip, who was the Chair of the Coronation Commission, was the first person to pay homage to the newly crowned Queen, kneeling before her to pledge his allegiance.

He said: “I, Philip, Duke of Edinburgh, do become your liege man of life and limb, and of earthly worship; and faith and truth I will bear unto you, to live and die, against all manner of folks. So help me God.”

Philip was also the one to encourage organisers to televise the coronation, as a way to help modernise the monarchy.

Opponents of the idea, such as Winston Churchill, felt that a televised coronation would undermine its dignity and its religious aspect.

However, the ceremony was indeed televised in the end – in the same way as King Charles’ will be next May.

I worked at Goodwill – staff DON'T get first dibs on fancy items, but shoppers need to be quick to beat them to it