Home » Fashion » Thinking of a Jumbotron Proposal? Some Say, Ugh. Others, Say Yes.

Jumbotron proposals have become as much a part of baseball as the seventh-inning stretch — no matter that they are often considered tacky and in bad taste.

When a proposal appears on the giant screen, a large segment of sports Twitter world (mostly women) chime in about how they hope no one ever proposes to them at a sporting event. Still, hundreds of these public, grandiose gestures happen every year and many proposees walk out of the stadium happily ever after.

On March 31, 2018, Joanna Chan, who works for Netflix, proposed to her girlfriend of five years, Julie Morris, who is employed at Hulu. The moment happened during the first period of a Calgary Flames game and was shown on the giant screen at Scotiabank Saddledome — known as the Enmax Energy Board — home to the National Hockey League’s Flames.

Ms. Chan and Ms. Morris, both 36 and living in Los Angeles (since married and now both going by Chan-Morris), had just embarked on a five-year tour of all 31 N.H.L. arenas, and the Saddledome was their final stop.

Joanna Chan-Morris says that a few stops before their final one, she knew she wanted to propose in Calgary. “It’s not about the public aspect of the proposal, really,” she said. “It was really just about making that last game special.” 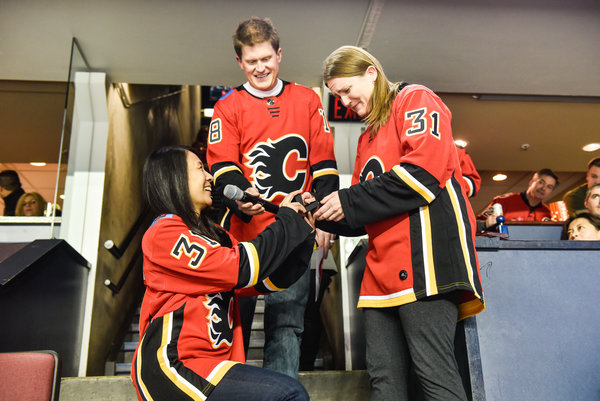 Even still, with that gesture, their engagement became a viral sensation, traveling beyond the area and onto the internet. Joanna paid 5,000 Canadian dollars ($3,782) for the opportunity, which she says was “worth every penny.”

The Saddledome is far from the only sports arena that gives fans the option to propose on a really big TV screen in front of thousands. Fenway Park, home of the Boston Red Sox, does 50 to 60 live, in-game proposals each season at a cost of $350 each. At Dodger Stadium, getting engaged onscreen will set you back $5,000, an event the team estimates happens two or three times a season.

The National Basketball Association’s Atlanta Hawks do several proposals a season, and the New York Knicks have a $500 proposal package for purchase. The Knicks have had “seven completed proposals so far this season,” the team said, and the package includes a split screen with video of the proposal on one side and your written message (“So-and-so, will you marry me?”) on the other. Most teams request that the payment come in the form of a donation to the team’s charity. Some sports organizations, though, like the Boston Celtics, don’t provide the option to propose on their giant screen at all.

Even though sports fans come from all genders, there’s an assumption that mostly men will be viewing the proposal, including the players. “Sports stadiums are not gender-neutral territory,” said Dr. Leslie Bell, the author of “Hard to Get: Twenty-Something Women and the Paradox of Sexual Freedom” (University of California Press, 2018). Just like rooting for your favorite team to win, she said, a woman saying yes to a proposal can be viewed as a sort of victory.

Also, she noted, an in-game proposal “puts the woman under pressure to say yes.”

When those traditional gender dynamics are reversed, the public response can be cruel.

In 2014, a woman surprised her boyfriend by proposing to him at an N.B.A. game. At the time, she told Fox 5 DC, “I thought this would make me the best wife-to-be ever to do it in front of his favorite team.” Her fiancé seemed happy she asked. But the response online was less than kind, with the frequently misogynist sports and culture website Barstool Sports calling it “the absolute worst proposal of all time,” among other worse things. Another blogger wrote that he would “never want to be proposed to by my girlfriend, and at an N.B.A. game no less, not in a million years.”

When Jumbotron proposals go wrong, spectators take an almost perverse pleasure in the rejection. In 2017, a rejected proposal at Fenway Park resulted in the entire ballpark chanting, “She said no!” (Jasmine Guillory’s newest novel, aptly named “The Proposal,” opens with a rejected proposal at Dodger Stadium that goes viral on the internet.)

This virality is something that more and more Jumbotron proposers are experiencing now that social media is a thing and everyone in the stadium has a smartphone, or the teams broadcast feel-good content across their various platforms.

What is it about our culture’s ideas about love, romance and marriage that allowed the phenomenon to gain traction in the first place? “Romantic comedies,” Chloe Angyal wrote for Buzzfeed in 2015, “teach us that the truer a true love is, the grander and more public the public grand gesture will be.”

It’s hard to know when the gimmick originated, but it had to be sometime after video screens were installed in stadiums; the first was at Dodger Stadium in 1980. But the technology has given rise to an entire industry of what Laurie Essig, the author of “Love, Inc.: Dating Apps, the Big White Wedding, and Chasing the Happily Neverafter” (University of California Press, 2019) calls “spectacular proposals.”

Jumbotron proposals are, of course, grandiose gestures, broadcasting love and commitment onto a giant screen for tens of thousands, and now, with the advent of social media, millions of eyes to consume. They are larger than life. “I just thought it would make it that much more special,” to put it on the Jumbotron instead of just proposing in the concourse, said Tyler Garrison, 40, who proposed to his now-husband, Ty Fleming, at Nationals Park in 2017. Mr. Garrison and Mr. Fleming, 35, live in Washington and are season ticket holders, which is why Mr. Garrison says he thought the big proposal would be “creating a special moment that we can have for the rest of our lives.”

Mr. Garrison never imagined that the moment would be viewed millions of times across the internet. He had planned the proposal with help from a friend, Robert York, a board member of Athlete Ally, a nonprofit athletic advocacy group. It was one of the first same-sex marriage proposals on a screen at a Major League Baseball game.

When the Chan-Morrises got engaged in Calgary last year, Joanna says the team was initially concerned that her request was a prank or a desire to make a political statement. But after she persuaded them that she just wanted to get engaged — something a straight couple would almost never have to prove — the moment was one of the most touching Jumbotron proposals in recent memory. It similarly went viral, and the response was mostly enthusiastic.

Responses to these same sex engagements were overwhelmingly positive perhaps because they run contrary to who typically gets engaged at sporting events.

But heartwarming feedback is not always the case. Marlyn Sanchez said she made the mistake of reading the comments under the YouTube video of her proposal at Marlins Park last year, and “people were so mean.” Ms. Sanchez, a 37-year-old curriculum support specialist for Miami-Dade County Public Schools and also a singer, had sung the national anthem at the ballpark before, which gave her now-fiancé, Rafael Cabrera, an “in” with the team. She was contacted and asked to come back and perform, and to throw the first pitch. Unbeknown to her, the person who caught the ball was Mr. Cabrera. He walked over, got down on one knee, and proposed. (The two plan to marry in May.)

Commenters joked that, because of the low attendance at Miami Marlins games, it appeared like Mr. Cabrera had rented out the entire stadium for her. Other people jabbed that it must have taken guts to propose in front of tens of people.

Mr. Cabrera, 35, was a former minor league ballplayer, and even though Ms. Sanchez says she isn’t necessarily a Marlins fan, the proposal was perfect because it was “totally him.” Even though they had never talked about the idea of public proposals, Ms. Sanchez says Mr. Cabrera would always say to her: “Don’t even give me any hints of what you want, because I’m gonna do it in my own way and that’s that.”

Although Ms. Sanchez says she has “thick skin” when it comes to criticism, in part because she’s a performer, getting engaged in such a public way invites feedback from viewers that not everyone will take in stride the way she did.

But for Julie Chan-Morris, when Joanna proposed to her in front of nearly 20,000 people in the Saddledome, she says it was surprisingly intimate. “It sounds crazy because there was so many people who were in attendance at the Saddledome that night,” she said, “but it was as if it was just us for a moment.”

She also understands the criticism levied at people who get engaged on Jumbotrons. “I think that, honestly, had Joanna just randomly done a public proposal,” Julie said, “I don’t think I would’ve been into it. But it was completely justified because of where we were,” with the arena tour.

Driver loses control of his Porsche and swerves off highway