As a kid, I was really looking forward to being a grown-up: the time I could do whatever I wanted. Adulthood, it seemed, was wasted on adults. 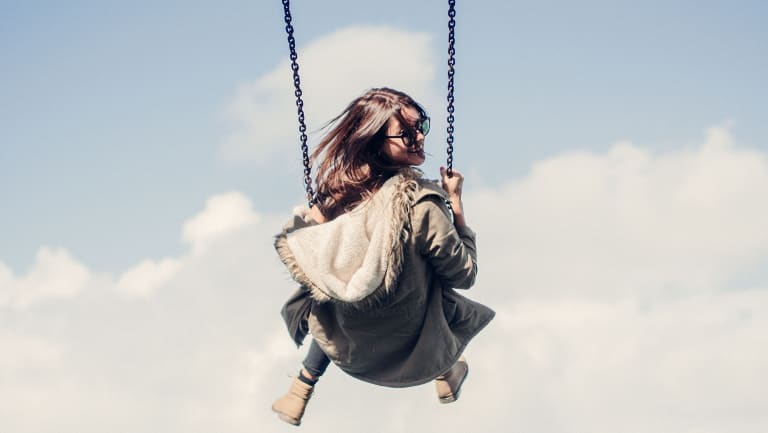 I hoped a magical point in time existed, whereby you suddenly knew the answers to everything.

I thought it was sad that grown-ups wasted their freedom on working all the time, eating broccoli, feeling tired and nagging their kids to do homework. They said there wasn't time to go to the park, they thought that midnight snacks weren't a necessary meal, and they hunted down children who were trying to watch a sneaky bit of telly and sent them back to bed.

Adults spent so much money on electricity bills and matching pieces of furniture that they had none left for the fun stuff, like the toys we excitedly circled in the weekly catalogues.

It was going to be different for me. When I grew up, I was going to eat Coco Pops and gooey chocolate pudding every day, get my ears pierced, daydream all day long without someone telling me to concentrate, stay up late watching movies with swear words in them, and spend all that money (which you could take out of the bank at will) on adventures and toys.

But as exciting as growing up seemed, it was equally terrifying.

There were little clues that I was out of my depth when it came to more mature matters. When I was eight, two boys told me they loved me and I laughed nervously, unsure what to do with that information. (I should have made the most of it because it would be 10 years until another would profess his love.) When I spotted some hair under my arms I threw out all my sleeveless tops and dresses, because if no one saw it then surely it wasn't happening. And when I saw that my older sister was bleeding, and was informed that would happen to me too, I wanted the world to stop so I could get off this crazy ride.

I wanted to be an adult desperately, and yet these steps towards it were strange and horrifying.

I thought a lot about being a grown-up, and decided to ask more questions – not just because I was curious, but because they were things I should know if I was to be an adult one day: "Why? Why? Why?" And I simply rolled my eyes back at the grown-ups who showed exasperation at my appetite for wisdom.

Secretly, though, I hoped a magical point in time existed, whereby you suddenly knew the answers to everything. I dreamed of the night a fairy would visit during my slumber and pour information into my brain. That's what seemed to have happened to my parents: how else would all that knowledge have got inside their heads?

That point hasn't arrived. Yet. A little part of me still holds hope that the fairy is just running extremely late, and she'll soon turn up – puffed out and with scruffy hair – apologising for taking so long.

I'm 38 now, knee-deep in budgets and business, and way over my head with kids and responsibilities.

I spend my days working, cleaning up and telling small people to put on their shoes. I put spinach on my plate instead of lollies or biscuits, send the kids to bed early, and then put my bed socks on and go to bed at a sensible hour. My money goes towards bills and then, if there's any left over, I shop for things like matching crockery instead of splurging at the toyshop.

Sadly, I don't even look around and feel joy that I can do anything I want. These are the years of freedom, the years when no one can tell me what to do or say. It's the time I should be able to do whatever I want, but I don't.

Except for the occasional moment when I see a glimmer of hope that my younger self would surely be a little proud of. Like yesterday, when I took my daughter to the park to watch her play. Every time we're there I have a little urge that I simply let pass. This time, though, I held on to it; as I helped her slide down the fireman's pole I said, "It's my turn next."

She laughed. "This isn't for grown-ups, Mum!"

"Are you sure?" I asked, already climbing up to the platform. As my hands reached around the top of the pole, I looked down. A crowd of small people had gathered, their eyes round with wonder. Was an adult really going to slide down? I did it, and the little audience around me clapped.

I made eye contact with one, a small girl with big dark eyes that had just awakened from a daydream. And I could have sworn she winked, before flashing a daring look at me. "Is that all you've got?" she seemed to be saying, perhaps hoping I'd rise to meet her challenge.

But then my little one and I had to leave. It was time to go home and put the vegetables on for dinner. I may have dreamed up a lot of fiction about what being a grown-up would be like, but I was right about one thing: the glorious independence of adulthood is definitely more suited to the fanciful minds of children.

How Did Rob Gronkowski and Camille Kostek Meet and Are They Married?