Home » Lifestyle » ‘Ali:’ A New Musical About The Iconic Boxer And Activist Is Coming To Broadway

A musical about the life and career of boxing icon and civil rights activist Muhammad Ali is coming to Broadway.

Written and directed by Clint Dyer, the upcoming Ali will also be composed by Teddy Abrams, the music lead for the Louisville Orchestra. According to Deadline, the project is being produced by Richard Willis, Brook T. Smith and TheTribecaWorkshop in partnership with ABG Entertainment, as well as having the support of the former champion’s widow Lonnie Ali.

“Muhammad has been a muse and continues to be a source of inspiration to so many artists around the world,” Lonnie Ali said in a statement. “I’m so proud to support this project and am thrilled to see his story brought to life on the Broadway stage.”

Ali is set to examine every facet of the boxing legend — ranging from his successes inside the ring, along with his work as a philanthropist, entertainer, and human rights activist. “Obviously this is an important piece for all time, but especially now,” Willis said. “It’s an important piece for anytime; it’s important that the younger generations know about Muhammad Ali and what he stands for and his examples. He’s always going to be an important example.” 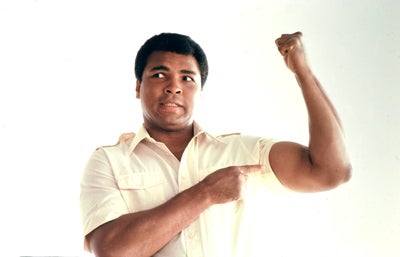 With the production currently in development, the lyrics, cast, and choreography for Ali are still being put together. The most important question however, is “who will have the starring role in this highly-anticipated play?” Actors such as Will Smith, Terrence Howard, and David Ramsey portrayed the larger-than-life figure in previous films, but it may be time for thespians of a younger generation to tackle the coveted role. The 28-year-old Eli Goree was phenomenal in One Night In Miami…, Deric Augustine nailed Ali’s mannerisms on an episode of Godfather of Harlem, and active boxer Michel Rivera has a strong resemblance to the Louisville native.

Finding the perfect candidate to play Ali will be critical, because all of the parties involved want to portray the man in both a correct and respectful light. “Right now it’s about getting the story going and understanding what we have to do,” Willis stated.