The detailed allegations of rape and other abuse levelled at American actor Armie Hammer in this three-part documentary are shocking in themselves. But the series quickly expands to paint a portrait of an entire dynasty of baroque awfulness stretching back to Hammer’s great-grandfather, oil tycoon Armand Hammer.

Filmmakers Elli Hakami and Julian P. Hobbs compile the accounts of several women (not all of whom took part in filming) to portray the actor as an alleged manipulator who uses an enthusiasm for kinky sex as cover under which to abuse women. 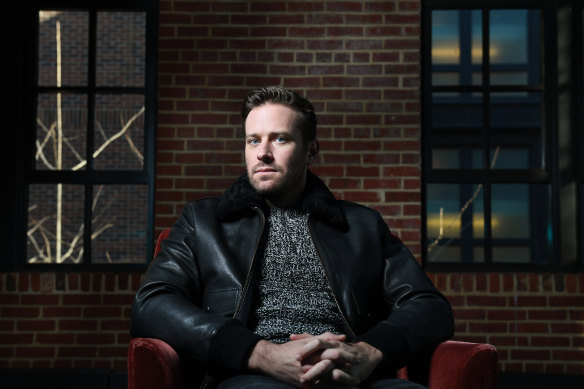 Armie Hammer in 2018. Hammer and his family are the subject of the new Discovery Plus docuseries House of Hammer. Credit:Matt McClain/Washington Post

Most prominent here is Texas businesswoman Courtney Vucekovich, who says she was left traumatised by her relationship with Hammer, during which she claims he left deep bite marks on her body and told her to wear them as a badge of honour.

Most shocking is the footage from a press conference last year in which another former partner accused Hammer of a vicious and protracted sexual and physical assault. Hammer, who denies all allegations against him, was investigated but not charged, though the Los Angeles County district attorney’s office said last month that its investigation was continuing.

By the end of the first episode, though, the focus has moved to Hammer’s aunt, Casey, whose 2015 book Surviving My Birthright describes depravity and dysfunction through several generations of the family. She tried to watch Succession, she says, but had to stop: “Magnify Succession a million times and it is literally my family.”

The chief villain in her story is her father, Julian, who she says sexually abused her as a child and who also woke her with a gun, threatening to kill her, while in a drug psychosis.

Hakami and Hobbs keep delving further back, painting Armand Hammer as a criminal who built his business empire on bribery and blackmail and who even aided Soviet espionage against the US.

There’s a lot here, so much so that at times the series feels like a slightly ungainly primer that ought to pave the way for at least a couple of separate and more authoritative documentaries or documentary series.

That said, Hakami and Hobbs do a great job of eliciting insights from those with inside experience of four generations of the Hammer dynasty, and House of Hammer stands as a necessary piece of work and an unqualified must-see.

Lena Dunham’s directorial romp through medieval England’s child-marriage scene is largely a winner, thanks in large part to a rambunctious performance from young Bella Ramsey (Game of Thrones) in the title role. Birdy is the frivolous 14-year-old daughter of a very minor lord and lady (Andrew Scott and Billie Piper) who are increasingly strapped for cash in their little castle up north. Birdy is enjoying an idyllic childhood, amusing herself and palling around with the goat-herder’s son, but her dad is desperate to marry her off to any old creep who will hand over a bag of gold for the privilege. Time after time, the wilful Birdy sabotages her father’s attempts at matchmaking, and time after time he beats her for it. Needless to day, there’s a great darkness here, and it sits uneasily with the playfulness of the script, of Dunham’s direction, and even of the soundtrack. That Birdy has been aged up for this film (she was 12 in the children’s novel by Karen Cushman) is one of a couple of contrivances seemingly intended to render things more palatable.

Once Upon a Time in Londongrad
Stan

Beginning with a single suspicious death – of property speculator Scot Young, who fell from his London penthouse window in 2014 – this pacy documentary series expands to examine what appears to be a Kremlin-linked campaign of as many as 14 murders on English soil in recent years.

Pulitzer Prize-nominated journalist Heidi Blake and her team also provide essential background on exiled Russian oligarch Boris Berezovsky – for whom Young worked, and who also turned up dead – and on London’s allure for rich Russians.

With Liam Neeson going head to head with Guy Pearce, Ray Stevenson and Monica Bellucci, there’s scarcely an American actor to be seen in this bloody action-thriller set in the Texas border town of El Paso. Neeson plays a hitman with Alzheimer’s who has to write reminders on his arm. When he realises that his next target is a child he bails on the job, knowing that means war with the cartel. Casino Royale director Martin Campbell makes great use of his locations, but the film is unlikely to linger long in your own memory.

Perhaps never has the serial-killer hell of Los Angeles in the 1970s and ’80s been put into context like this. Police would later determine that there were at least 20 serial killers active in the city during that time – many of them working in teams – and the population was for long periods kept in a state of terror by seemingly endless strings of abductions and murders. This compelling six-part documentary series has old detectives, survivors and others to help navigate the complex narrative and recall their encounters with evil.

The words “from the producers of Line of Duty” aren’t the guarantee of quality they used to be. This supposed psychological thriller series is painfully grating from the outset, mainly because no character behaves like a real person. Certainly not London psychologist Joe O’Loughlin (Poldark’s Aidan Turner), who seems intent on making himself the main suspect in a woman’s murder by behaving like a freak and lying to police. Based on a book by Australian novelist Michael Robotham (The Secrets She Keeps).

Brave translators for British troops in Afghanistan given sanctuary