Home » Lifestyle » Are Public Proposals A Good Idea? Here’s What You Need To Know Before Trying One

Imagine for a second that you are at a sporting event with your boyfriend of a few months and his bros. Suddenly, he’s on one knee, and the stadium’s JumboTron is broadcasting his proposal to you… with your name spelled wrong. If this increased your heart rate and made you wonder if public proposals are a good idea, I am entirely with you. The good news? This is not happening to you IRL and is, in fact, the plot of New York Times-bestselling author Jasmine Guillory’s new novel The Proposal.

In her novel, released on Oct. 30 of this year, Guillory brilliantly dissects the ethics of public proposals and the challenge of being the one to do the rejecting. "After Nikole [the main character] turns down her JumboTron proposal, she receives a lot of harassment," explains Guillory, "especially after a video of the proposal goes viral." She explains that Nikole receives harassment from both her ex-boyfriend and viewers of the video that were offended by her rejection of him. "People have very strong ideas of how women should react to men," says Guillory, "[Nikole] got attacked for not being grateful enough, womanly enough, and because her desire to have an engagement that she wanted was somehow cruel." 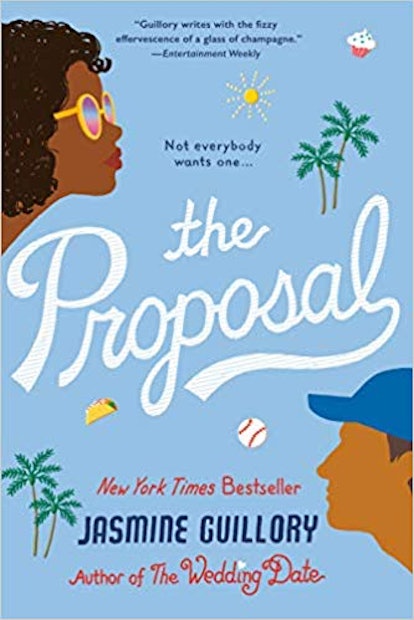 When writer Nikole Paterson goes to a Dodgers game with her actor boyfriend of five months, she expected to have a good time, not a public proposal in front of thousands of screaming fans. Nikole knows it’s not right and says no… Also at the game is Carlos Ibarra, who comes to Nik’s rescue and rushes her away from the camera crew and the booing crowds. When the video goes viral and Nik’s is attacked on social media, she leans on Carlos for support. The two form a friendship which quickly turns into a passionate rebound, and Nik assumes that a handsome doctor like Carlos isn’t looking for anything serious. But when their glorified hookups start breaking the rules, one of them has to be smart enough to put on the brakes…

Though Guillory’s novel shows what can happen when a public proposal doesn’t go as planned, the author isn’t entirely against the concept. It just takes a lot of planning and communication. She thinks there can be merit to the act as long as both partners are on the same page. The only way to know what your partner wants is to make sure you have candid, honest conversations about what you are both comfortable with and where you want your relationship to go.

To understand the psychological impact of a public proposal, I talked with Joshua Klapow, Ph.D. and clinical psychologist and host of the "The Kurre and Klapow Show". He explained that the problem with public proposals comes down to an imbalance of power, a lack of privacy, and the likelihood of a false "yes." According to Klapow, public proposals make an already hugely emotional event even more intense and can influence people to say "yes" simply because there are so many people watching. This is why it is so important to talk to your partner about what they would want a proposal to look like.

As Guillory’s novel shows, rejection is really hard for both sides of the equation. According to Klapow, rejecting a marriage proposal and hurting someone with their honest answers can be one of the hardest things a person can do. He explains that when this challenge happens public, being honest can feel almost impossible.

"Always remember that one person’s big romantic gesture could be another person’s nightmare," says Guillory. She stresses that you make sure you know what your partner wants. Guillory also encourages you to remember that there is a possibility of a highly public no, even if you have talked about getting engaged before. "A lesson trial lawyers learn early on is very applicable here, ‘Don’t ask if you don’t already know the answer,’" she says.

When it comes down to it, both Guillory and Klapow are very clear on how careful one must be when it comes to publicly proposing. And that, ultimately, there is no definitive right or wrong here as long as both partners are on the same page.

One night, a few years ago, I was visiting the Trevi Fountain in Rome, and I witnessed three public proposals within five minutes! The first one was so beautiful, and everyone erupted with cheers and, as I clapped in response, I really couldn’t think of a more romantic place to get engaged. However, by the time that the third proposal occurred, I wondered how these people felt about being proposed to within minutes of the others. And I was also curious if all of them had said yes. When discussing potential proposal places with your partner, it’s entirely within your right to request a specific space in which you would feel most comfortable to be proposed to. (And to ask that your partner waits on proposing if two proposals occur minutes before yours is planned to happen!) There are a lot of options when it comes to deciding on a place with your partner whether you return to the site of your first kiss, the place you first fell in love, your favorite spot in the city, or an event that means a lot to both of you.

I find myself thinking back to this moment at Trevi Fountain after talking with Guillory and Klapow, and wonder how many of those couples are married now. Whether or not their proposals were a success, I hope those folks are doing OK today. If you’ve ever thought about publicly proposing to your partner, hopefully, Guillory and Klapow have given you insight on how to ensure that your proposal is received well. Communication is important for a lot of reasons, and hopefully, these two experts have helped you understand how it plays a crucial part in proposing publicly. Here’s to hoping you never have to learn that lesson the hard way in front of hundreds, or thousands, of people. And, thanks to Guillory’s novel, at least reading about it could be pretty fun.

‘AJ and the Queen’ Canceled After One Season at Netflix

How Season 2 of 'The Umbrella Academy' Improves Upon Season 1