Home » Lifestyle » Company or cult? Inside the wonderful world of Disney’s D23 ‘fanstravaganza’ 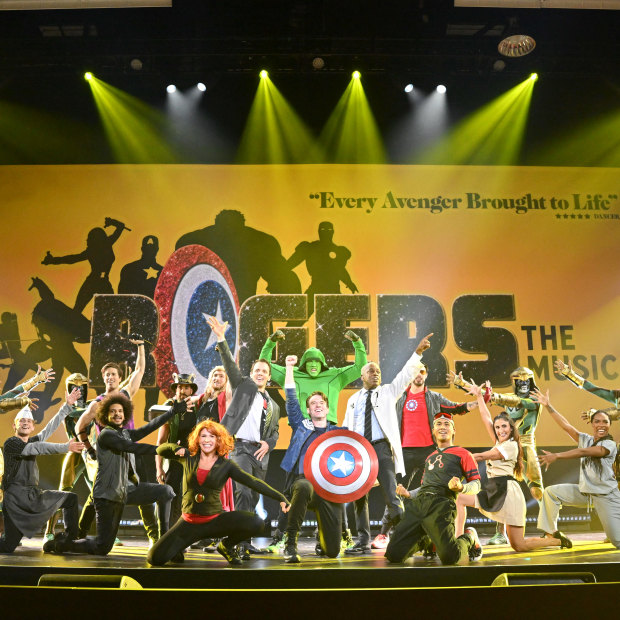 Save the City, a song from a fictitious Avengers musical, was a big moment for the fans at D23 Expo.Credit:Disney

That Disney is big is news to no one; it had revenues of more than $US67 billion ($100 billion) across its film, TV, streaming, theme park, cruise ship, hotels and consumer products divisions last year. But witnessing its enormity up close and in person, well, that’s something else.

Over the three days of the D23 Expo at the Anaheim Convention Centre on the outskirts of Los Angeles earlier this month, the entertainment behemoth puts on a truly staggering display of its power over fans and talent alike. It’s irrefutable proof that when Disney calls, people come running.

The event is usually held every two years, but this is the first one since 2019. About 100,000 tickets have been sold to fans who clamour for the 7500 seats at the main showcase events, hoping for a sneak peek of what’s coming from Marvel, Star Wars, Pixar and co.

Many of them have come in costume as their favourite Disney princess or Marvel superhero or Star Wars character, and some of them have spent thousands of dollars on custom-built outfits. They will sit in on sessions in five separate strands of panels and talks, wander the grounds bonding with fellow cosplayers, line up at the food trucks and spend big on merchandise. 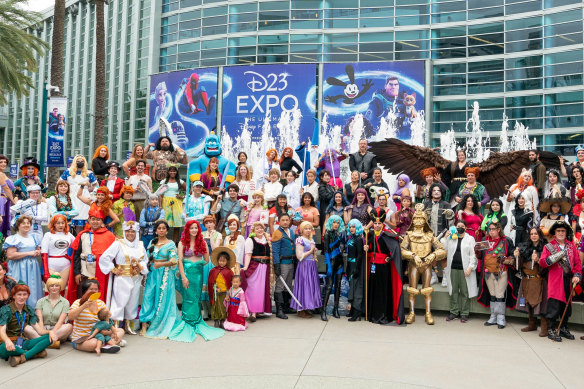 Some of the many fans who turned up in cosplay as their favourite Disney characters.Credit:Disney

In return, they get full-scale Broadway musical numbers, exclusive video clips, and more A-list guest stars than you’ll find outside of Oscar night.

Jamie Lee Curtis comes on and off in a motorised egg, saying nothing at all. Harrison Ford comes close to tears as he tells the crowd “I’m delighted to be here again,” while suggesting the forthcoming Indiana Jones movie will be his last. “This is it,” he says, his voice choking with emotion. “I will not fall down for you again.” 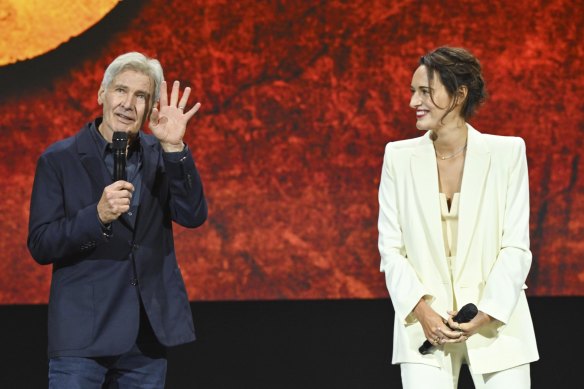 Harrison Ford, seen here with Phoebe Waller-Bridge, was emotional as he vowed the forthcoming Indiana Jones movie would be his last.Credit:Disney

But for all the star power on display, it’s a nerdy looking guy in a check sport coat and baseball cap who draws the biggest roar. He is Marvel Studios boss Kevin Feige, and with 29 movies and $US27 billion in box office to his name, he’s the most successful filmmaker alive.

“D23 is very, very special, we can do things for you,” he says before introducing “the first, maybe the last, Avengers musical number”.

The song is called Save the City, and it’s from a Broadway show called Rogers The Musical, about Steve Rogers (aka Captain America). But while it was written by Tony-winning composer Marc Shaiman, the musical doesn’t actually exist. It’s just an elaborate joke, set up in a couple of Marvel movies (a billboard spotted in Spider-Man: No Way Home, a poster in Doctor Strange and The Multiverse of Madness) before being delivered in full in the Disney+ series Hawkeye. Now it’s live, and the fans are delirious.

In some ways, the number perfectly encapsulates what this event – and, arguably, what Disney – is all about. Fandom is its own reward, but superfandom delivers so much more. The deeper you go, the more you get.

For the company, fandom drives engagement, and engagement drives profits. It’s a virtuous circle of value generation for brand and fan alike. But to the outsider, it can sometimes make Disney look a little more like a cult than a company.

About a kilometre down the road from the convention centre is Disneyland. When Walt bought the 45-acre site in 1953, it was a flat spread of orange groves, and Anaheim was a town of about 12,000 people. Now it’s a sprawling chunk of suburbia surrounding a small city of hotels and strip malls, all built to service Disneyland and the neighbouring Disney California Adventure park.

Together, they host about 18 million people a year (roughly 50,000 a day). That makes it the second most visited of Disney’s theme parks, behind Florida’s Disneyworld, which has about 58 million visitors a year (the other parks are in Paris, Shanghai, Hong Kong and Tokyo).

Right now, streaming is where the action is: Disney+ hadn’t even been launched when the D23 Expo was previously held, but it now has 221 million subscribers worldwide; as many as Netflix. But it’s impossible to overstate how important the parks are to the way people feel about Disney. Many of the company’s 195,000 employees work in them (down by about 30,000 pre-pandemic), though like all Disney workers, they are called “cast members” rather than employees. 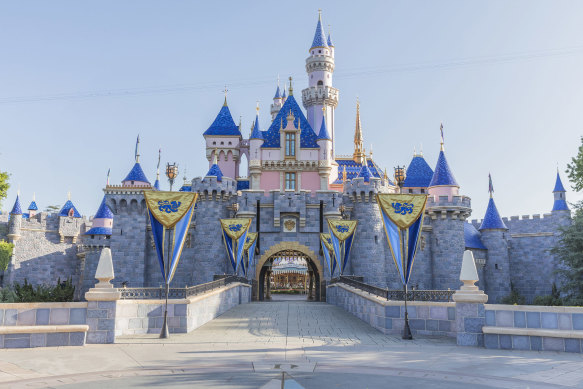 Many of the stars who take to the expo stage talk of having lived near a park, visited a park, or worked at a park as a key part of their personal Disney “journey”. (The company, often referred to colloquially as the House of Mouse, also has its share of disgruntled former employees, who have been known to call it as Mauschwitz instead.)

“Growing up, my parents took my sister and me on annual trips to Walt Disney World,” says Disney CEO Bob Chapek on the first morning. “Those visits changed my life because they made me realise there was a great big world out there beyond the smoke stacks of my hometown, that I could really aspire to something beyond the world around me.”

In the company’s self-mythologising, the parks are places where dreams come to life, and where memories that will last a lifetime are made. They are tangible proof of the words of the song that serves as a corporate mantra: when you wish upon a star, your dreams come true.

The only person who gets close to a Feige-like roar from the D23 crowd is Josh D’Amaro, the head of parks and experiences. He speaks to a packed auditorium on the final day with evangelical fervour about how the fans “kept the Disney magic alive” during the COVID-induced park shutdowns of the past two years. 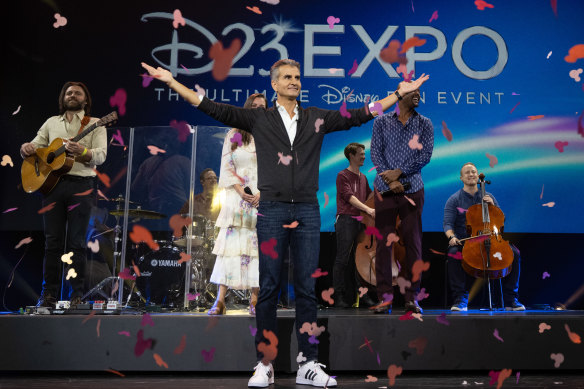 Parks and experiences boss Josh D’Amaro presented as a cross between a rock star and an evangelical preacher.Credit:Disney

“I understand how much Disney means to you all,” he says, “and I feel so lucky that it’s my job to keep giving you brand new reasons to feel that way.”

Disneyland is, in company speak, “the happiest place in the world” (™). And while the weariness on the faces of parents dragging their small children towards the exit gate at 11pm might make you question that, it mostly delivers on the promise.

The rides are terrific, the world-building superb (Disney has a class of worker known as Imagineers, people employed to dream things up and make them reality, and the parks are where they really go to town), the opportunities to commune with the wonderful world of Disney – that is, the shops selling Disney-branded tat – endless.

Even my native cynicism is no match for it all. As I enter Galaxy’s Edge, the Star Wars-themed corner of the park, and see a droid workshop and life-size Millennium Falcon I am instantly 12 years old again, dreaming of lightsabres and X-wing fighters and cute girls with silly hairstyles.

Everything here looks aged and lived-in, and is solid to the touch, which triggers such a deep emotional response in the model-making child in me that tears spring to my eyes. When I enter Savi’s Workshop and hold a hefty metal-hilted lightsabre in my hand and hear that distinctive hum as its fibreglass blade lights up, it doesn’t matter that I have no practical use for this $US200 ($300) toy. Resistance is futile, and I hand over my credit card.

It’s here, in this moment, that the genius, evil or otherwise, of Disney hits me most clearly. The company has mastered the connection between play, memory, emotion and consumption, and found ways to parlay that across endlessly iterative products.

The Disney model works a little like this: An animated film – Aladdin, say – begets a stage musical, which begets a live-action film, which begets a theme park ride (Florida’s “Magic Carpets of Aladdin”). At a Disney hotel (there are 53 of them) or on a Disney cruise ship (five, with two more planned), fans can mingle with their favourite characters from the show. And, of course, there’s always merchandise (pyjamas, dolls, mugs, music) to take home to make sure the memories linger long after the bill has been settled.

Or, if you’re feeling more generous, you could say that the company merely provides its customers with the tools to live out their fantasy lives to the fullest, whether they are little girls of five or men in their 50s.

“That’s what Disney is about,” Chapek told the audience. “It’s the spark that ignites something special inside you, it’s the promise of a brighter tomorrow and encouragement to forge your own path.” 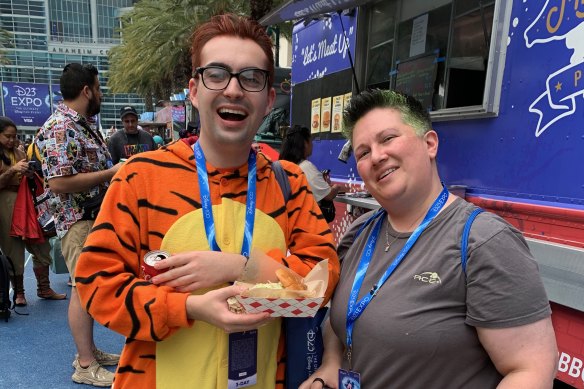 The relationship between Disney and its fans is ‘like a magic trick’, says Christopher Falcioni and Emily Kahn.Credit:Karl Quinn

For 28-year-old Christopher Falcioni, that means travelling from Washington DC, where he works at the Spy Museum, and wandering around the site dressed as Tigger. He didn’t make it into the panel he most wanted to, but it doesn’t matter. “It’s the energy,” he says when I ask what it is that brought him here. “At home no one is going to talk to me about this stuff, to scream and shout about the news. It’s the magic you get just by meeting people who feel the way you do about this stuff.”

He’s under no illusions, though, about the company he used to work for; the last time he was at D23 expo, he discovered the ride he worked on at Disney World in Florida was being shut down, while he was sitting in the front row of the theme parks presentation.

“It’s a company, it’s not Make A Wish Foundation,” he says.

“Obviously, it’s a financial transaction, they’re making money,” says his stepmother, Emily Kahn, who is dressed as Winnie the Pooh. “But the people who work here on these projects, these movies, these shows, they really do love it. I think it comes from love – it’s not all financial.”

At its core, the relationship between Disney and its most dedicated fans rests, says Falcioni, on a mutual understanding.

“It’s like a magic trick. We know it’s not real, but it is real in some way.

Karl Quinn attended D23 Expo as a guest of Disney.

How Netflix and Other Streaming Services Are Doubling Down on Anime

'Thor: Love & Thunder': The Guardians Might Be More Involved in the Story Than We Originally Thought