People who catch COVID-19 will only have to isolate for five days from September 9 unless they still have symptoms or work in vulnerable settings, under changes agreed to by national cabinet.

The prime minister and state and territory leaders also agreed to end a mandate on masks being worn on planes from the same date. However, the decision on whether masks will still be required on public transport will be left to each state and territory government. 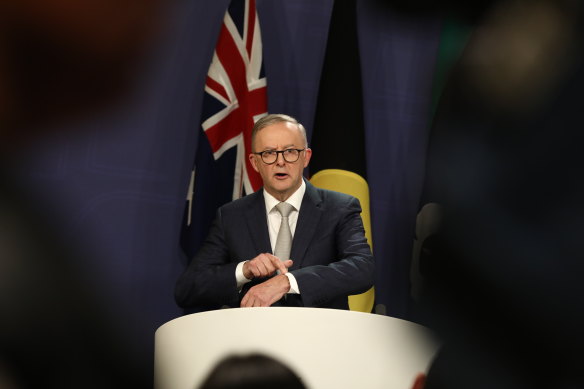 The leaders, who met in Sydney, did not decide on the fate of the $750 disaster leave payments available to support people who cannot work while in isolation.

The payments were extended by the federal government in July but are due to expire at the end of September. National cabinet will meet again in a fortnight to discuss what will happen beyond that.

Prime Minister Anthony Albanese said leaders agreed there was evidence that cutting the isolation period was a proportionate response to where the pandemic was up to now.

The shorter period will only apply to people with no symptoms at the five-day mark and those who work in high-risk settings such as aged care or disability care will still have the week-long isolation requirements.

“That is what has been happening. There aren’t mandated requirements for the flu or for a range of other illnesses that people suffer from.”

Chief Medical Officer Paul Kelly briefed the national cabinet on the implications of following the United States in reducing isolation from seven to five days.

Ahead of the meeting NSW Premier Dominic Perrottet and some business groups had been pushing for the isolation period to be reduced, while most national cabinet members said they would be guided by the health advice. The Health Services Union called for isolation to be scrapped, following the UK’s example, while public health experts warned isolation was a critical part of reducing transmission.

Labor MP Michelle Ananda-Rajah, an infectious diseases physician before winning Higgins at the May election, tweeted on Tuesday that “five days is not enough”.

Pressed on whether the isolation period would drop from five days to zero in October if there were no longer support payments available, Albanese said leaders would reassess the need for any isolation period “at some time in the future” but would not be drawn on when it might be scrapped. No premiers made a case for reducing isolation below five days, he said.

“Gradually, as we come to deal with COVID over a long period of time, we need to ensure that the mechanisms that have been put in place … by government that impose restrictions on people, that
we reassess them at an appropriate time,” he said.

“Some people are paid and some people are not paid. Obviously, for those people who aren’t paid, it’s much harder for them to follow those orders, and that affects all of us in terms of there being a greater spread of the virus,” the ACTU secretary said.

But Treasurer Jim Chalmers said the payments could not continue to be extended indefinitely.

Services Australia will update its website by the end of Friday with the new eligibility rules for the leave payments to reflect the changes starting on September 9. The government is still considering whether the payment amount will drop from $750 to reflect the shorter time in isolation.

Do you remember Death in Paradise’s first detective, Hugo Speer?

Parallel Oscars? How the 1953 Ceremony Could Forecast Wins for Nicole Kidman, ‘Dune’ and ‘Belfast’

How you can watch The Queen's state funeral inside Westminster Abbey