A bayside council has accused the Andrews Government of breaking an election promise after the Planning Minister intervened to approve the extension of an operating permit for a recycling factory in its green wedge.

Kingston City Council had voted against allowing Alex Fraser Group to continue operating its Clarinda plant, which processes up to a million tonnes of glass and construction waste a year, beyond 2023. 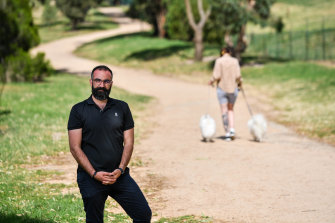 Kingston mayor Steve Staikos at Heatherton, the site of parkland that will be part of a ‘chain of parks’. Credit:Joe Armao

Planning Minister Richard Wynne intervened last week, “calling in" a Victorian Civil and Administrative Tribunal application to overturn the council's decision and then approving a 10-year extension on the grounds that an independent panel found tonnes of recycling could end up in landfill.

The project is one of four being audited by the council due to Alex Fraser Group's hiring of Labor lobbyist Phil Staindl, who worked with allegedly corrupt developer John Woodman.

Kingston mayor Steve Staikos said the council was "deeply disappointed" with Mr Wynne's decision after he introduced laws in 2015 to shift the waste industry out of the municipality's green wedge.

"We can’t help but feel that this is a broken promise to the community," he said.

"The panel's decision shocked us and I've heard from members of the community who read it in disbelief."

In 2015, Mr Wynne said: "Recycling facilities [should be] properly located in industrial areas, away from parklands and homes."

Cr Staikos said Kingston residents had put up with a "legacy of smelly tips", but had stayed in or bought into the area based on Mr Wynne's assurances.

The recycling plant is on Kingston Road in Clarinda, across the road from Heatherton Christian College. There is a house next door and other residences about 450 metres away, outside the green wedge.

"The government is delivering on an election commitment to protect our green wedges – and the panel found this would not in any way compromise the short- or long-term objectives for this area," she said.

The panel advised that extending the planning permit would also reduce the need to extract natural resources.

Once a planning minister "calls in" a VCAT planning application, it can't be overturned. 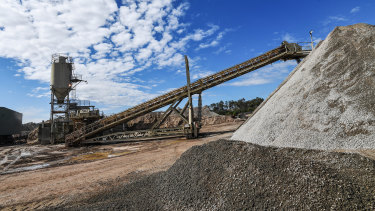 The Alex Fraser Group recycling centre in Clarinda has been given a 10 year extension. Credit:Joe Armao

"It represents an important shift away from past landfill and quarry activities of the area, and is a proven example of the circular economy in action," he said.

Cr Staikos said the council had identified alternative locations in the municipality where the recycling plant could be moved.

"We shouldn't be caught into this argument that just because recycling is good, and it is, and just because their operations are important, which they are, [it means] that they can go and set up anywhere, regardless of the zoning," he said.

Last year, Kingston City Council approved a special audit of all development approvals from the past 15 years that involved Mr Woodman and his associates, including Labor insider Mr Staindl.

As part of its probe into the allegedly crooked planning system at Casey Council, IBAC is investigating allegations against Mr Woodman and Mr Staindl.

Alex Fraser Group formerly used Staindl Strategic as its lobbyist and Mr Staindl advised the company on its political strategy to keep its recycling plant in the green wedge.

Cr Staikos called on the government to deliver on its election promise to invest $24.8 million to continue the council's work to create a 355-hectare "chain of parks".

The recycling plant's position does not interfere with the plan to turn landfill areas into a series of linked parks from Warrigal Road in Moorabbin to Braeside Park in Dingley.

The government spokeswoman said it would deliver on the promise.

The government describes green wedges as non-urban areas in metropolitan Melbourne that lie outside the city's growth boundary.

It says they can contain a mix of agriculture and low-density activities, including quarries, conservation areas, water catchments and major infrastructure that support urban areas.

There are 12 designated green wedges across 17 municipalities that form a ring around the city.

BBC iPlayer update: How to use new BBC Together tool to watch favourite shows with friends

Kate Moss’s New Jewelry Line Was Inspired by Her Travels