Home » Lifestyle » Do you need a £200 fitbit for your brain? asks SOPHIA MONEY-COUTTS

Do you need a £200 fitbit for your brain? asks SOPHIA MONEY-COUTTS: It’s the latest wellbeing gadget that promises to boost your meditation skills

Lying on my bedroom floor with my eyes closed, I’m listening to Chrissy issue instructions via an app on my phone.

‘Take your gaze inwards,’ Chrissy orders in her calm, smooth voice, it is easy to become overwhelmed by the news today, to feel hopeless, powerless and anxious.’

This, momentarily, makes me feel hopeless, powerless and anxious, before I tell myself to stop worrying and concentrate on Chrissy’s voice, which floats out from the phone app and communicates with a meditation band strapped across my forehead and tucked behind my ears.

This is the Muse 2 Brain-Sensing Headband, a ‘multi-sensor meditation device that provides real-time feedback on your brain activity, heart rate, breathing and body movements.’ In other words, it’s a Fitbit for your brain. 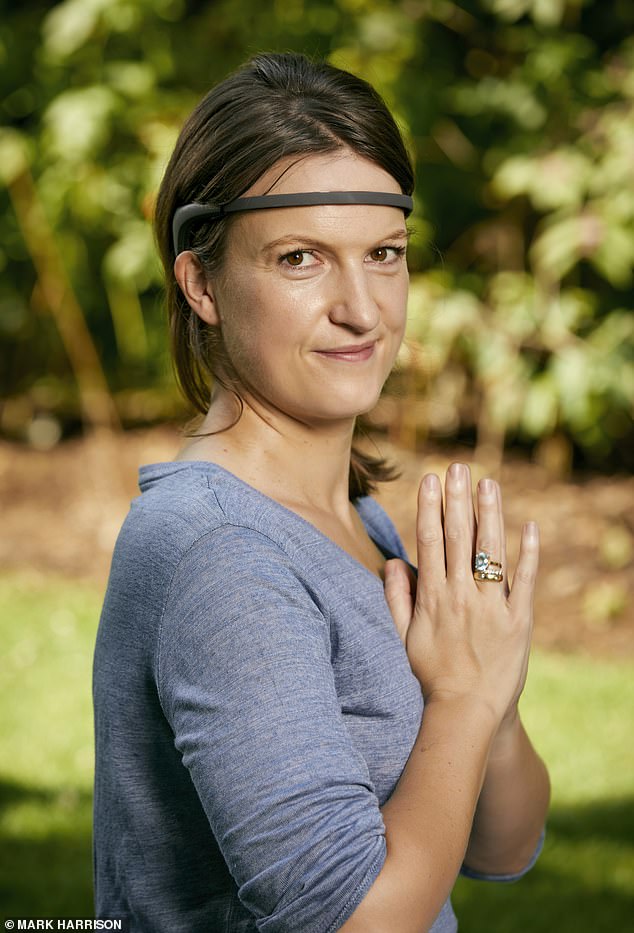 I was excited by this idea since I’m a meditation fan. Over the past few years, I’ve clocked up hours of heavy breathing on a mat in my bedroom. Either I use a guided practice, which means finding a recording of someone soothing online and listening to that for 20 minutes, or I simply lie back and listen to my own breath.

I don’t do it every day. Like many, I tend to fall back on meditation when I feel low and want to stop my brain from racing with critical thoughts. (Why can’t I write like P. G. Wodehouse? Why did I eat that extra biscuit?) As soon as I’m feeling perkier, I give it up again, but it’s certainly helped me during rocky periods.

I’m not the only one. What was once deemed a peculiar practice exclusively for hippies has gone mainstream. In the past few years, as we’ve collectively become obsessed with ‘wellness’ and ‘self-care’, meditation apps have boomed.

In 2017, the digital mental health market was valued at just over £1 billion By 2026, it’s expected to quadruple and reach £4 billion.

Headspace, the mindfulness app founded by Brits, celebrates its tenth anniversary this year and downloads of such apps — along with the likes of Calm and Buddhify — have doubled since Britain went into lockdown at the end of March.

On one level, the launch of a device promising to improve meditation skills makes sense.

‘Wearable tech’ — think Apple watches, Garmins and Fitbits — has exploded in popularity and, much like counting the steps you take with a Fitbit, the idea that you can measure the calmness of your brain during meditation is alluring, particularly when it is an activity where the rewards do not seem immediately obvious.

Use the Muse headband, and it’ll keep track of your brain activity, heart rate and breath to sum up how each session goes. You’ll be given the percentages and little awards as a result. 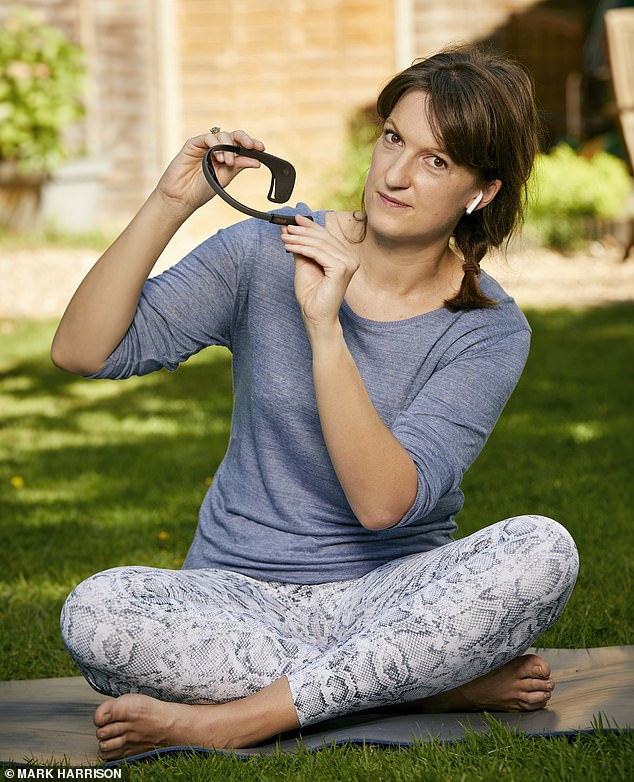 The Canadian maker of the £226 device claims its aim is to help people build a ‘consistent’ meditation practice. Pictured: Sophia holding the gadget

For eight minutes I lie back, listening to Chrissy’s meditation. The end of the recording is signified by a gong, which means I can sit up again and look at my phone to see how well my brain has performed.

Oh dear. I was only 48 per cent calm, although, I was 93 per cent relaxed. Huh? The app also tells me I was awarded ‘ten birds’, ‘12 recoveries’ and ‘490 muse points’. I don’t understand any of this. I feel confused rather than Zen.

I use this £226 device several times over the next few days. It makes me look like a wannabe warrior princess, but the aim, according to its Canadian maker, is to help people build a ‘consistent’ meditation practice by measuring their results.

It does this through seven gold sensors on the inside of the band (electroencephalography or EEG sensors, more commonly used by the NHS to diagnose sleep disorders and epilepsy), which track my brain activity, sending the information to my phone.

I listen to an American (Cara) try to help me shift myself from ‘frazzled to focus’ by breathing properly in a further seven-minute session. ‘In a few moments’ time, you’re going to be really kicking it in everything you do,’ says Cara, with the gung-ho enthusiasm of a newly qualified life coach. 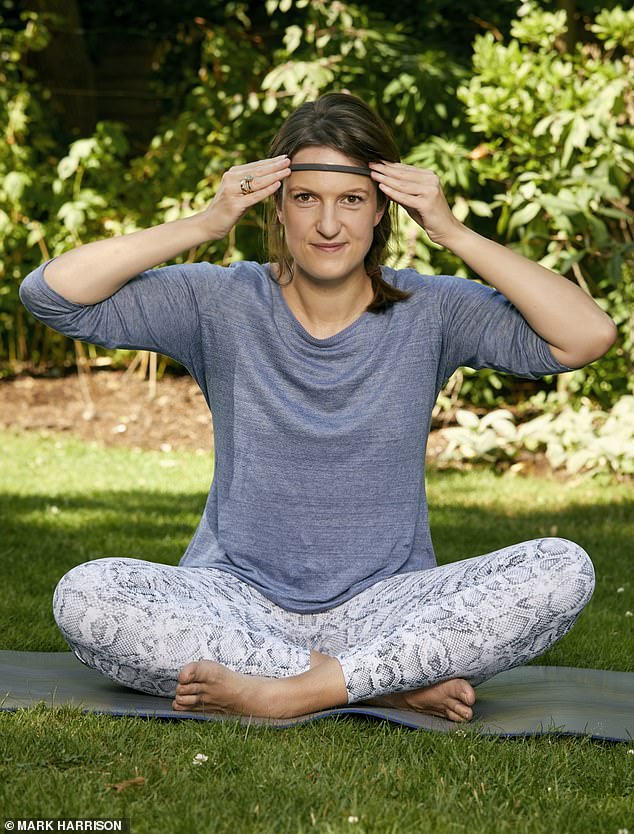 Sophia (pictured) explained that the gadget comes with nine free recordings, but an £11.99 monthly subscription is needed to unlock more

Afterwards, I look at my results: 52 per cent calm, 92 per cent relaxed and something called an ‘aviary award’. ‘There was at least one bird singing nearby for every minute you spent in the session,’ it says. ‘When a bird sings, are you able to accept the reward and keep focus or do you get excited and shift mind states?’

Baffled by this gobbledygook? So was I. And having yet another device to charge (and yet another charger) is unlikely to do much for your stress levels.

Remembering to turn it on and ensure the sensors are properly aligned on your forehead before you start a meditation is anathema to relaxation, too.

Plus, picking a meditation is tricky as, although the device comes with nine free recordings, you can only unlock the rest of the available Muse meditations by paying a monthly £11.99 subscription. Those wily Canadians!

Trying to understand the results from each meditation made me feel like I needed a PhD in graphs. Eventually I worked out that the ‘calm’ reading referred to my mental state, while the ‘relaxed’ score was a physical reading dictated by how fidgety I was.

In my session with Chrissy, the ten ‘birds’ meant I maintained a meditative state ‘for a long time’, the 12 ‘recoveries’ were moments when my brain was briefly distracted but managed to turn itself back to the meditation. 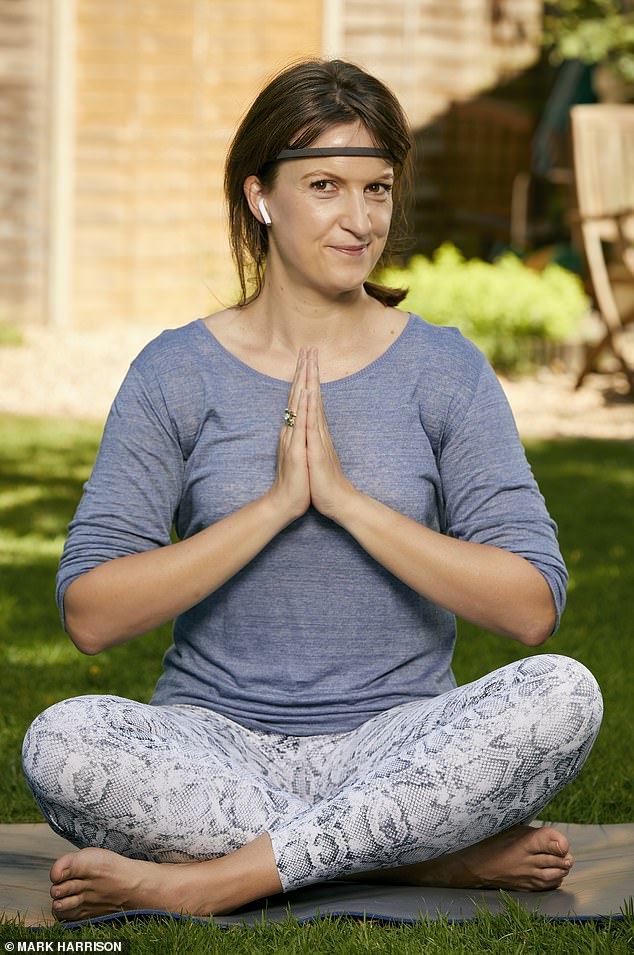 Sophia (pictured) said some things are best left unknown, she advises against investing in the Muse 2 Brain-Sending Headband

For each second you meditate you get a ‘muse point’, to encourage you to do it more often.

See what I mean about baffling? The very point of meditating isn’t to be ‘good’ or ‘bad’ at it, you’re just supposed to sit or lie there —to quieten those judgmental thoughts. This headband made me want to meditate less because it made me feel more competitive about my performance.

Why this modern-day obsession with monitoring ourselves, with our steps, our sleep, our calories? Why do we need to know how our meditation went? We don’t. It’s simply another device to make us more anxious about ourselves.

When I grumble to a friend about the Muse, he rolls his eyes. ‘Sounds like my wife,’ he says, ‘every morning when she wakes up, I ask how she slept and she normally says “Great”.

Then she looks at her Fitbit and says ‘Oh no actually I didn’t, I only got half an hour of deep sleep!’ Quite.

Some things are best left unknown, I reckon, so don’t bother with the band. Try sitting down with your eyes closed while deep breathing instead.

If you nod off, it would still be more beneficial than worrying about how many ‘birds’ you’ve clocked up.

Bank Holiday! Roads will be jammed and rain is on its way