DOMINIC LAWSON: Any Brexit plan that Peter Mandelson and Jacob Rees-Mogg BOTH think is hopeless must be an absolute stinker!

You wouldn’t expect Peter Mandelson, the former EU trade commissioner and long-time advocate of British membership of the euro, to sound like Jacob Rees-Mogg, the spiritual leader of Brexiteers bitterly opposed to the Prime Minister’s ‘compromise’ offer to Brussels.

But yesterday, Lord Mandelson did just that, declaring that Theresa May’s Brexit White Paper would deliver ‘the polar opposite of taking back control. The EU would ultimately call the shots, not just now but indefinitely. Britain, in effect, would be entrapped and the more you think through the implications, the more the whole thing looks less like a soft Brexit than a national humiliation’. 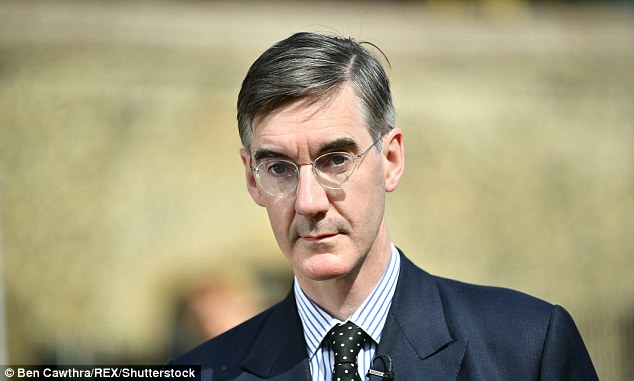 Obviously, Mandelson’s motives are not the same as Jacob Rees-Mogg’s — in fact, to use his own words, they are ‘the polar opposite’. What Mandelson wants is to stop Brexit happening altogether and, therefore, to persuade the public it would be better to forget the referendum result and remain in the EU, rather than follow the Prime Minister’s version of Brexit.

But, in one respect, the PM is doing her best to ‘take back control’ — by controlling the language of this debate.

That is why she, time and time again, describes as ‘a common rule book’ her offer to the EU of a post-Brexit settlement in which all of the standards for goods and agriculture in this country will be set . . . by Brussels.

It is true we would have those rules and regulations in common. But, as the ConservativeHome website observes: ‘It is only ‘common’ in the sense that if my neighbour’s TV remote controlled not just his television, but also mine, we would share a ‘common decision’ on what to watch.’

Yet most Conservative MPs, including many who were, unlike Mrs May, Leave campaigners, back this concession to the European Union’s demands — on the grounds that they didn’t fight for Brexit to have different standards for the manufacture of washing machines.

But the Government White Paper, agreed a week ago at Chequers, goes far beyond mere widgets. It also contains a so-called ‘non-regression clause’ in what it calls ‘areas including the environment and employment rules’.

This means not just that the UK commits to maintain all existing legislation in this field, to reassure the EU that we won’t undercut their own employment and environmental regulations: it will bind our hands in future.

In other words, we will be subject to the EU — sorry, share a common rule book — in a way that will arbitrarily restrict our ability, as an independent nation, to increase the competitiveness of our business and enterprise. 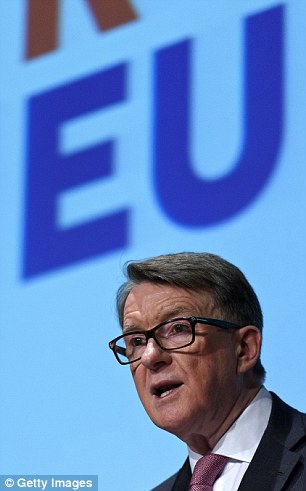 Peter Mandelson’s  (pictured) motives are not the same as Jacob Rees-Mogg’s — in fact, to use his own words, they are ‘the polar opposite’

Or, as David Davis warns (having resigned in protest at this ‘offer’ to Brussels and at the way he, supposedly Secretary of State for Exiting the EU, had been completely cut out of the negotiations by the PM’s favourite civil servant, Olly Robbins): ‘If the Government follows its present course, it will stifle innovation and stymie economic growth. It is profoundly dangerous to leave the EU, but remain subject to regulations made by institutions in which we have no say.’

As recently as three months ago, Michael Gove, the intellectual leader of the Brexit campaign, took a similar view.

Giving evidence to a House of Commons select committee in April, the Environment Secretary said he rejected this demand of Michel Barnier, the EU’s chief negotiator: ‘The non-regression clause, in essence, is a means of the EU giving itself potential control over domestic legislation . . . I do not think that is necessary. I think it goes against the spirit of taking back control.’

So, why has Gove now decided to swallow this stinker, having only recently pointed out how the ‘non-regression’ clause runs completely counter to the slogan (‘Take Back Control’) that won the day for Vote Leave?

The answer is that he believes the vital thing is to make sure Brexit happens, even in a non-ideal form, and keep open the option of changing treaties for the better at a later date. Presumably, he feels this might become possible if a future Conservative government were elected with a solid parliamentary majority.

The trouble is that Mrs May’s series of concessions to Michel Barnier has already cost the Conservatives significant support from those who voted Leave. A poll published yesterday by Opinium Research showed support for the Conservatives dropping by 4 per cent over the past month, to 36 per cent, and support for Ukip more than doubling, to 8 per cent.

But Gove is right to believe that the current parliamentary arithmetic, with the Government lacking even a bare majority, makes it intensely difficult for Mrs May to get ‘true’ Brexit through the House of Commons: the Labour Party, only a handful of whose MPs were Brexiteers, is determined to oppose whatever final deal is proposed by the Prime Minister and her (depleted) Cabinet.

Yet Mrs May’s plight is entirely of her own making. She chose to call a General Election three years before she needed to, on the grounds her then-parliamentary majority of 12 (inherited from David Cameron) was inadequate as support for her forthcoming negotiations with Brussels. She declared that every extra seat the Tories won would ‘strengthen my hand in those Brexit negotiations’. That was, actually, a good argument: I still believe it was right to call the election for the reasons she gave.

The problem was that she turned out to be a desperately poor campaigner, with a palpable distaste for spontaneous and open debate with the public.

The great campaigners enthuse the voters — say what you like about the irresponsible and chaotic nature of Boris Johnson, but that’s what he does.

Yet May effectively banned Johnson from the hustings during that campaign: instead, it was all about her — and the longer her robotic campaign went on, the more voters began turning to Jeremy Corbyn, of all useless people. So here we, most unfortunately, are.

However, I can offer more than a glimmer of hope to those who feel deeply let down by the Prime Minister’s vision of the UK post-Brexit: her offer will almost certainly be rejected by the European Commission.

Mrs May is proposing to keep the UK bound by EU single market regulations ‘only’ in goods and agricultural products.

In services (which represent 80 per cent of Britain’s GDP), we would — thanks awfully — not remain subject to every twist and turn of EU legislation.

And the PM also insisted in her interview yesterday with the BBC’s Andrew Marr that leaving the customs union, and ending both free movement and huge payments to the EU, were ‘non-negotiable’ as far as she was concerned.

But Brussels — unless it is prepared to break its own negotiating ‘red lines’ — cannot accept this. Its position has long been that the single market can’t be ‘cherry-picked’: in other words, the UK cannot be in one part (goods) and not in another (services). And it regards freedom of movement as inextricably linked to freedom of capital (what May calls ‘frictionless trade’).

Don’t just take my word for it. No Briton I know has better contacts in Brussels than Charles Grant, director of the Centre for European Reform, who has been given medals of appreciation from such EU nations as France, Italy and Poland.

And this is what he has been told: ‘The EU will reject Theresa May’s proposals. It views her complex customs proposals as unworkable and believes that the four freedoms of the single market are indivisible. The EU will be grateful that May has finally imposed discipline on her Cabinet and come up with a plan. That will earn her some goodwill and a ‘no, but’, rather than a plain ‘no’.

‘But if May wants a deal, her red lines will have to shift. She has already agreed to be a rule taker and accepted a role for the European Court of Justice. She will also have to accept some sort of customs union, payments to the EU and something close to free movement of labour.’

The PM knows that to accept those demands would not just betray the 17.4 million people who voted Leave — it would destroy her leadership of the Conservative Party. So we are heading into ‘No Deal’ territory.

The question is, does Mrs May mean it when she says: ‘No deal is better than a bad deal’? Little she has done so far suggests that she does.

YOU pay judges up to 60K to move house