Federal Parliament is about to decide whether a corruption watchdog with a few teeth, but no fangs, will be better than none at all in a government that spends about $660 billion a year. And there is a strong chance that federal politicians will choose an empty doghouse – or at least one with a very short chain.

The fall of Gladys Berejiklian has changed the debate about a national integrity commission to the point where its lukewarm supporters in the federal government are turning ice-cold. Her sudden resignation as NSW premier has dismayed Prime Minister Scott Morrison and others who believe a popular Liberal leader has been brought down by a show trial.

The draft plan to create a national integrity commission, an election promise from Morrison in his first months in the job, has been dismissed as too weak by former judges, constitutional lawyers and barristers who spent years prosecuting corrupt politicians. The Centre for Public Integrity, an independent group of experts, has called it the “weakest watchdog” in the country.

Now the fight is on to decide how much power this new commission should have. Morrison will not be swayed by calls to copy the NSW Independent Commission Against Corruption. He does not want the new federal body to hold public hearings, act on anonymous tips, issue public reports and apply a relatively low threshold for what is labelled corrupt.

A deadlock on these questions means the Commonwealth Integrity Commission, first put to federal cabinet in 2018, will die on the floor of Parliament. But one of the experts who has read the draft government bill, University of Sydney law professor Anne Twomey, says Australians will lose if the watchdog has no teeth.

“While there does need to be a careful balance between openness and protecting the reputation of people, this can be managed by having preliminary investigations and hearings in private,” she says.

“But if we want to maintain public trust in an integrity body, then ultimately it needs to conduct its serious business in public, just as the courts do. If it is all behind closed doors, with everything kept secret, then people will be concerned that the system is ‘protecting its own’, that investigations are compromised for political reasons and the corruption is going on unhindered.”

Twomey says that will only corrode public trust in government.

The government may be inching towards changing its draft. It could give ground, for instance, on the idea that the CIC cannot initiate investigations and can only act on references from other agencies. The draft position is untenable because it weakens the commission compared to other agencies and departments, including those it may end up investigating.

The Attorney-General, Michaelia Cash, will probably have to fix part of the draft bill that sets up two standards for inquiries – one for officials including police officers, another for politicians. The Australian Federal Police Association and the Police Federation of Australia want one rule for all. Morrison and Cash will struggle if they want to deny them that. 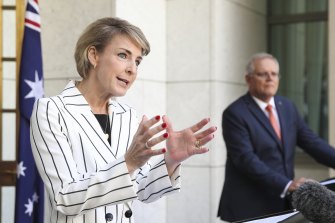 The government is also signalling a concern about retrospective powers, but its position is confusing. To stop the commission examining events in the past would be to neuter it from the start. Experts think it should be able to consider conduct in the past against the laws that prevailed at the time.

Whatever those changes, the federal plan is to set up a weaker body than most of the state and territory commissions that have operated for years. The CIC could not put politicians in a public witness box; hearings would be held in secret.

Berejiklian would never have given public evidence under the federal model. Voters would never have heard her being asked about her relationship with Daryl Maguire, the former Liberal MP whose financial dealings led him to leave NSW Parliament. They would not have heard the recorded telephone call, played in an open hearing in October last year, in which Berejiklian stopped Maguire telling her more about his deals, saying: “I don’t need to know about that bit.” 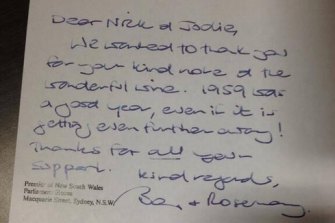 The thank-you note for a bottle of wine written by Barry O’Farrell that triggered his downfall.Credit:

The federal model would never ask a politician in a public forum about his or her dealings with a company receiving big government contracts – which is what happened when the NSW ICAC asked former NSW premier Barry O’Farrell to appear in April 2014. Voters would not hear O’Farrell denying he had received a bottle of 1959 Penfolds Grange Hermitage. And they might never see the handwritten note confirming he did.

Liberals regard the fall of Berejiklian as damning confirmation of the flaws in the ICAC model revealed with O’Farrell six years ago and former NSW premier Nick Greiner in 1992. Greiner was cleared of corruption by the NSW Supreme Court over appointing an MP to a public service body, but that ruling came too late to save him from political attack. He resigned before Parliament could attempt a no-confidence motion.

ICAC did not force Berejiklian or O’Farrell to resign: both did so based on what emerged in hearings. Days before O’Farrell went, the counsel assisting ICAC, Geoffrey Watson, SC, basically cleared the premier and a fellow minister. “We have found no evidence to implicate either in any corruption,” he said. Berejiklian stepped down before the next hearings have even begun: the trigger was an ICAC press release saying it would investigate whether her conduct involved a breach of public trust. 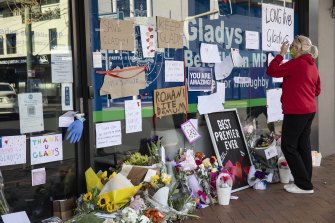 This is the power of an ICAC: to change politics through public statement and open hearing. It does not convict, because that is a matter for the courts. It does not sack, because that is a matter for Parliament. When its target is a politician, a commission can produce evidence that shifts the scales in public debate over whether that politician should stay or go. These scales work very differently to the scales of justice.

Those who hate this power overlook how necessary it can be to finding corruption in politics. Former NSW minister Eddie Obeid flourished under a political system that allowed his dealings to go unchecked. He even won $162,000 in a defamation claim against the publisher of this newspaper in the NSW Supreme Court in 2006. It took the ICAC to uncover government deals that gave his family a $30 million windfall.

But the Liberals are not the only ones with doubts about bringing this power to Canberra. There were concerns within Labor about going too far when former leader Bill Shorten and his shadow cabinet discussed their policy before the 2019 election. Labor chose to back a powerful federal ICAC but only after a debate about whether it might lead to “show trials” for politicians.

There is no sign of division within the Coalition, which means there is no pressure on Morrison to go further than the very limited bill already circulating. More than half the lower house does not want the NSW model, if it accepts a corruption watchdog at all. The advocates for the strongest possible reform do not have the numbers.

The scene is set for a deadlock. Cash is planning to put a bill to Parliament in the coming weeks after three long years of argument since the Coalition promised a new watchdog. There has been at least a year of detailed debate over the draft government plan. The message from the government is obvious: it does not really want to do anything.

Morrison feels so strongly about the risk of a NSW model that he is unlikely to negotiate with Labor and the crossbench on changing the final bill. Labor would probably want to make the theme of corruption part of its campaign at the next election, citing the “sports rorts” and “car pork” funding programs, which means it may prefer to reject the government bill and promise a stronger watchdog under a Labor government.

The chances of a crossbench deal appear to be slim too. The government could get its way with support from Pauline Hanson’s One Nation and at least one other, but it would struggle to get Rex Patrick, the South Australian independent who will be campaigning on integrity and transparency when his position is at stake in next year’s election. Tasmanian independent Jacqui Lambie is unimpressed with the government, which might leave the outcome up to another South Australian, Stirling Griff. There is no guarantee Hanson will side with the government: a public debate about a docile watchdog could make it hard for her to back the bill, given she is also up for re-election next year.

An election test is certain. The Coalition will promise action while Labor will vow to create a stronger watchdog, accusing Morrison of being weak on corruption. First, however, they must decide whether the new commission lives or dies in Parliament.

One of the arguments against change is that politicians have always engaged in pork-barrelling. The $100 million “sports rorts” program or the $660 million promised for car parks can be shrugged off by some who point to the original “sports rorts” affair, in 1992, to argue that some things never change. But the amount of money certainly does: the projects scribbled on a whiteboard three decades ago were only worth $30 million.

“If you want greater accountability and if you want this sort of malfeasance to end, does it matter to say that it is no worse now than 20 years ago or 40 years ago?” asks Keith Dowding, professor of Political Science and Political Philosophy at the Australian National University.

“If ministers aren’t embarrassed by the fact that things are revealed in Parliament, and that journalists criticise them, then you might want some other process, in which case an integrity commission with teeth might be the way forward.”

But Dowding, who has written at length on ministerial accountability in Australia and other countries, is cautious about the popular assumption that rorts are worse. “The data that we have shows that it’s not straightforwardly the case that it’s worse now,” he says. One trend, however, is the deterioration in the public service.

“One of the things that has changed, and which makes it easier for government to do these sorts of rorts, is that the public service has been weakened,” he says.

“At the top end it has been more politicised. You have far more people who are staffers and political appointments and who are making decisions, so a large part of the public service integrity has disappeared. So I think there is a structural problem in the way in which government is now operating, both between ministers and the public service.”

There is already proof of corruption. The Australian Commission for Law Enforcement Integrity (ACLEI) announced on August 23 that a former Australian Border Force (ABF) official had pleaded guilty to forgery and theft. On September 1, it said a former Department of Agriculture official engaged in corrupt conduct by helping a building company. On September 8, it said a former ABF officer had helped a drug syndicate.

One of the objectives of the new commission will be to absorb the work of the ACLEI. There is no dispute over this because the argument among politicians is about the power to examine politicians. In the debate over how far this power goes, there may at least be a consensus that politicians cannot be spared the scrutiny.

The federal government is bigger than ever, with more power in every field from social services to national security, and with more money pouring into projects that range from local shower blocks to nuclear submarines. The potential for corruption is immense.

Who knows what a strong integrity commission could uncover? Or what it could deter?

Zac Efron Is Selling His L.A. Home & We Have All the Photos from Inside the House!

The Masked Singer on FOX: Fans ‘work out’ first signed up celebs after season 4 promo clue