‘Welcome to the new era’: First transgender owner of the Miss Universe pageant Anne Jakrajutatip says the competition will be ‘run by women…for all women’

The owner of Miss Universe has said the world famous beauty pageant has entered a ‘new era’ after 70 years of being run by men as she takes over as the first transgender woman to own the competition.

Thai businesswoman and CEO of the JKN Global Group Anne Jakrajutatip told the audience at the New Orleans Morial Convention Center in New Orleans in New Orleans that ‘time [was up]’ on the old order of the pageant.

Jakrajutatip said: ‘From now on it’s gonna be run by women, owned by a trans woman, for all women around the world to celebrate the power of feminism.’

The 43-year-old said: ‘It’s the moment, really, for women to take the lead’ as the roaring audience gave a standing ovation. 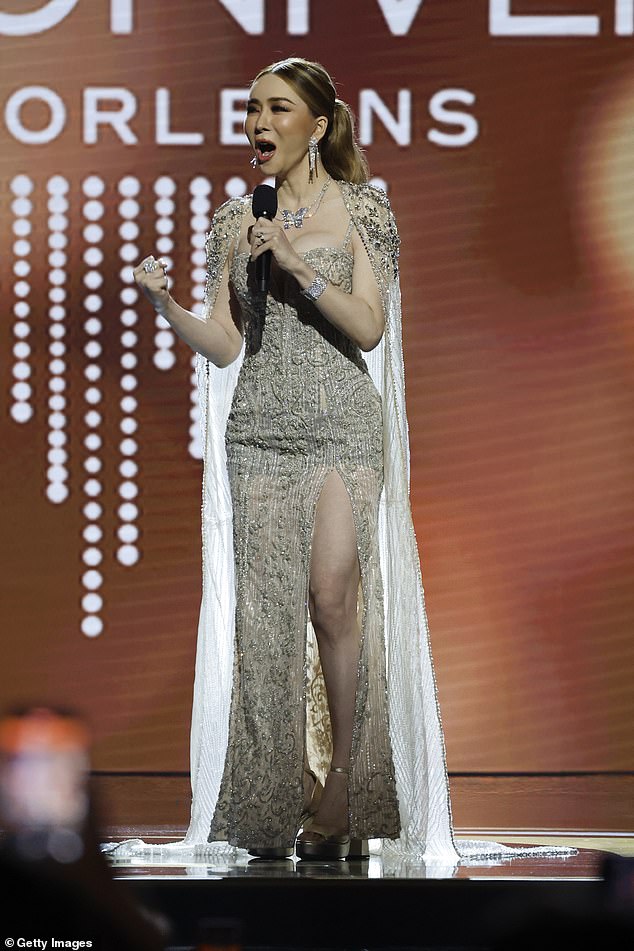 Anne Jakrajutatip, 43, the owner of Miss Universe, gave a rousing speech last night’s competition to a standing ovation from the audience

The businesswoman, who became the owner of the pageant this year, wore a stunning floor-length cocktail dress embellished with gems as she addressed the audience.

She wore her blonde locks in a slicked-back low ponytail, parted in the centre, and accessorised her gem-encrusted gown with an equally sparkling butterfly pendant necklace and dangling diamond earrings.

Jakrajutatip continued that the pageant would stand for: ‘Diverse cultures, social inclusion, gender equality, creativity, a force for good and of course, the beauty of humanity.’

She went on to describe her own experiences as a transgender woman and how it has affected her path in life.

‘When I was born, as a trans woman, who got bullied and sexually harassed by my own teacher when I was young, plus I was not accepted by society because they did not want to embrace my differences,’ she said.

‘But guess what? I chose not to surrender.

‘I turned pain into power. And I turned life lessons into wisdom.’

Jakrajutatip, a media entrepreneur and mother-of-two, bought out the company which owns the Miss Universe pageant this year for $20 million (£16.6 million). 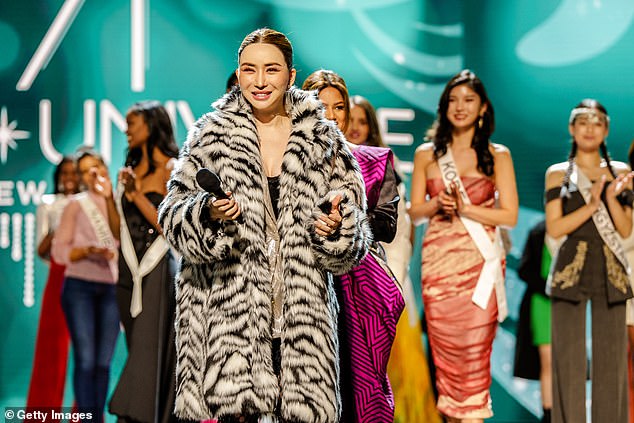 The businesswoman, also a mother-of-two, gave a rousing speech about a ‘new era’ of the Miss Universe pageant as she takes over as the first transgender woman to own the competition

The businesswoman, originally from Thailand, revealed how she struggled with her gender identity as a child

She has previously revealed that, as a child feeling like she was born in the wrong body, she was inspired by Oprah Winfrey to aspire to a career in the media.

The Guardian reports she wanted to become a chat show host after hearing Winfrey’s story as a survivor of child abuse.

She said: ‘In order to gain respect, you need to have success.’

As she takes over the Miss Universe pageant, the competition’s rules have been relaxed to allow married and divorced women to enter.

When challenged on how some people view Miss Universe as a sexist institution, Jakrajutatip hit back, arguing it is about ‘uplifting people’ and ’empowering women’.

She said the swimsuit competition was about showing other people ‘how you look after yourself’.

The businesswoman added she wants to see opportunities opened up for more women as she oversees the pageant from now on.

She said: ‘You can build everything by yourself, like I have done before… I started the business from scratch. I never had a golden spoon in my mouth.’

While she runs the competition in the US, Jakrajutatip remains an advocate for transgender rights in her home country Thailand.

Camilla, Duchess of Cornwall Is Sporting an Unexpected Accessory That's Perfect for the New Year