Adam, you’ve got a fan in me
Adam Spencer has brought a sharp and snappy focus to The Drum which, sadly, had gradually disappeared over 2019 to the point where we had almost given up on it. We are now dedicated watchers and passionate supporters of Adam – can we keep him, please?
Joanne Anderson, Lancefield 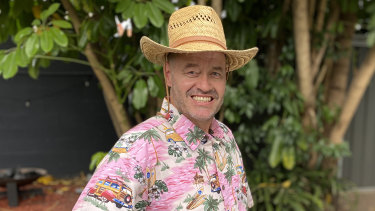 Adam Spencer is articulate and intelligent as the host of The Drum’s summer series, Summer Drum. Credit:ABC

Spread the love
Perhaps while everyone is rightly focused on Ash Barty some thought could be given to a tennis biopic being made of that other great Australian player. No, not Margaret Court – Evonne Goolagong Cawley. Miranda Tapsell would be great.
Samantha Keir, East Brighton

Offence taken
I braced myself before looking at The New Pope on SBS On Demand. To say that it’s as mean-spirited as Jude Law’s The Young Pope would not do it justice. The New Pope is amazingly offensive to the Catholic Church. Nuns are shown as brainless sex objects; priests, bishops and cardinals as lecherous imbeciles. Not since Henry VIII was refused a divorce by the Vatican has there been this much anti-Church propaganda.
Robert Hart, Eltham

Change not quite as good as a holiday
First we had Philip Brady and Simon Owens’ weeknight program axed and replaced with only a two-hour slot on Sunday nights. Then we have the sudden disappearance of Alan Pearsall, with no explanation to listeners, and Denis Walter moved to nights. And now, to top it off, the very popular Tony Moclair and Bianca Johnston have been axed and replaced with a Sydney-based chap. I was a rusted-on ABC listener until they cast Red Symons aside. With all these changes at 3AW and a new breakfast host on the ABC, I will be heading back to 774.
Joy Young, Safety Beach

Guess who?
Surely I’m not the only person who chuckled at the own goal when Perez Hilton, who specialises in knowing everything about every celebrity there is to know, walked into the I'm a Celebrity… Get Me Out of Here! camp and didn’t know who anyone was?
Alexander Duntish, St Kilda

Not all heroes wear sports uniforms
In the same way that Geoff Schmidt (Green Guide letters, 23/01) criticises the overuse of the word “crisis” by the media, why do broadcasters often refer to sportspeople as “heroes”? I haven’t heard of any who have put their life on the line for someone while on the sports field. Isn’t that the true definition of a hero?
Annette Bando, St Kilda East

Bring home the bacon
Thank you, management of 774 ABC breakfast radio. Thank you for seeing the light. Thank you for righting your past disastrous mistake. Thank you for every fantastic stand-in temporary host. Thank you for Sammy J. But shame on you for not knowing your radio audience and forcing me to switch radio stations for the past two years. It was akin to taking away my bacon and eggs and replacing them with dry toast.
Don Brooke, Langwarrin

No love for AO tennis commentary
The tennis at the Australia Open has so far been terrific. The commentary from these American has-beens has been terrible. McEnroe has a monotone, drab delivery and Jim Courier likes to tell us everything he knows, even during play. Since it’s the Australian Open, could we not have Australian commentators, most of whom are a delight to listen to, instead?
Kip Read, Moama

Choose your words carefully
Shame on the insensitivity and thoughtlessness a reporter showed last week in referring to John Millman’s tennis result as a “heartbreaker”. What an ignorant slap in the face to the bushfire victims. We have seen real heartbreak, grief and despair in the eyes and on the faces of those shown standing amid the ashes of all they own. “Heartbreak” is not for use in sports results.
Mike Montague, Burnside

When does Luther series five start and who’s in the cast with Idris Elba?