Cornered in the chamber, Rishi deploys his trademark Indiana Jones sucker punch: HENRY DEEDES on the weekly showdowns between PM and Keir Starmer at PMQs

Rishi Sunak and Sir Keir Starmer’s weekly showdowns are starting to remind me of that classic scene in Indiana Jones when our hero finds himself cornered by an Egyptian swordsman wielding an enormous sabre.

This giant handles his terrifying blade with the expertise and aplomb of a Samurai warrior, swishing it this way and that, all the while laughing maniacally. Poor Indy looks doomed.

Then he casually whips out his revolver and shoots his would-be assassin square in the smacker. Audiences cheer wildly.

The Prime Minister plays a similar trick at PMQs.

Starmer goes at him hard with a plethora of meandering questions on our lagging economy – first this way, then that – knowing full well the PM has no satisfactory answer.

Little Rishi hops from side to side, dodging each slash and lunge, resembling a man who’s just trod on an upturned plug.

Then, when his opponent has exhausted his questions, he finally produces a six-shooter and takes him out with: ‘Yeah, but you supported Corbyn.’

Crass? Repetitive? Probably. But it always guarantees Mr Sunak those enthusiastic roars of approval for the lunchtime news clips he so desperately craves.

Plus it provides the added bonus of sending Sir Keir absolutely doolally. 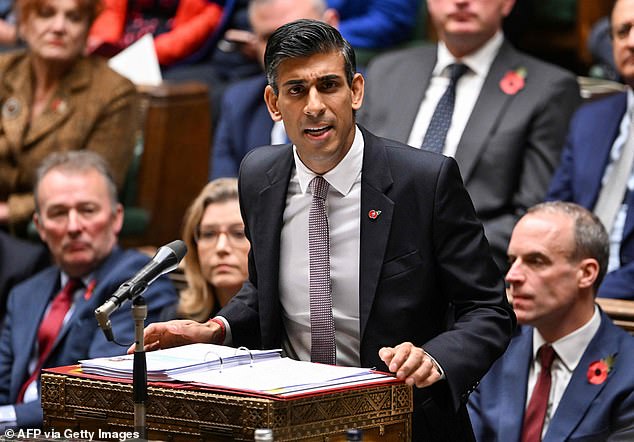 Little Rishi hops from side to side, dodging each slash and lunge, resembling a man who’s just trod on an upturned plug. Then, when his opponent has exhausted his questions, he finally produces a six shooter and takes him out with: ‘Yeah, but you supported Corbyn’ 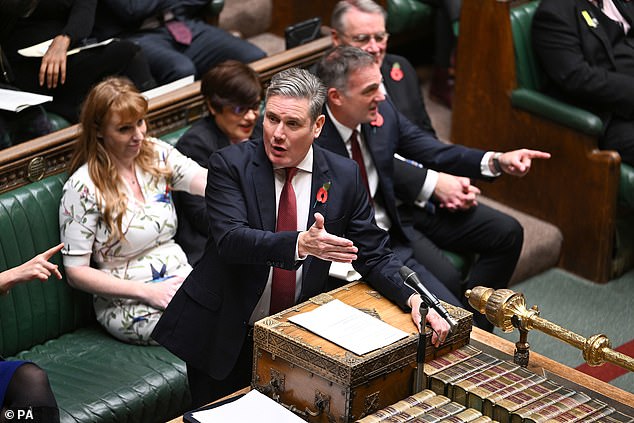 Starmer chose to focus much of his attack on non-doms, an issue that is hardly dominating discussion in saloon bars around the country

The Labour leader’s weaponry, it should be said, appears to be in dire need of sharpening. His attacks were noticeably blunt despite having a fearsome selection of daggers from which to choose.

The PM faces a nasty rebellion on housing targets, for example, yet Starmer chose to not mention it.

The fact that some Tory MPs have announced they plan to abandon ship before the next election also went strangely unmentioned.

Instead, Starmer chose to focus much of his attack on non-doms, an issue that is hardly dominating discussion in saloon bars around the country but which (Starmer thinks) embarrasses the PM because of his wife’s previous tax arrangements.

For a man so intent on occupying the moral high ground, shouldn’t Sir Keir consider leaving the Wags out of it?

Scrapping non-doms would theoretically save the Treasury £3billion a year. A slightly piddling amount of money in the grand scheme of things, though Starmer claimed that money could train as many as 15,000 doctors.

‘That’s what Labour would do!’ he yelled.

Not everyone in the House shared Sir Keir’s usual enthusiasm for pointless figures.

Up in the Stranger’s Gallery, his bulbous-nosed Labour colleague Lord Foulkes had already nodded off. One can hardly blame him.

I sometimes worry about the people who help prepare Starmer’s scripts. Like nuclear scientists who must limit their exposure to toxic plutonium, Sir Keir’s writing team probably have to work in shifts lest their heads explode with boredom.

Meanwhile, there was an uncharacteristic aggression about the PM. His voice has discovered an extra couple of decibels.

He accused Starmer of being an opportunist with ‘no answers and no substance’.

And eschewing the old ‘you backed Corbyn’ bullet on this occasion, he finished with a double shot of ’You tried to stop Brexit’ and ‘You’re terrified of your union paymasters’.

The effect was no less deadly. 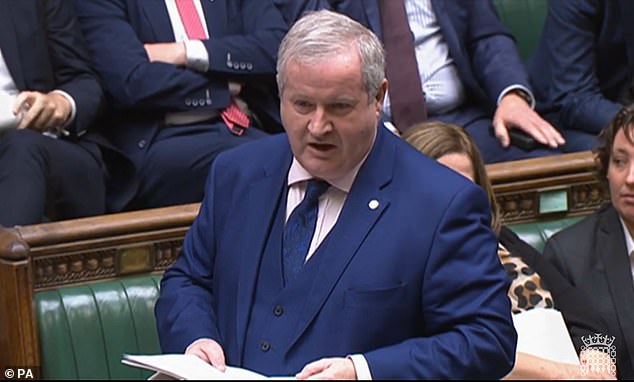 Needless to say, the SNP’s Ian Blackford then had a lengthy moan about the Supreme Court ruling out the legality of a new independence referendum vote.

He announced that the government was ‘denying Scotland democracy’ in tones of such grandiose self-importance that it was clear he considered his words would one day be of huge historic import.

Who knows, perhaps the old windbag’s speeches will indeed be studied by historians the way theologians pore over the Dead Sea scrolls. Though I doubt it.

Desperate for a say on the matter was Theresa May, who was bobbing up and down frantically.

She turned her Medusa gaze at the SNP benches and in those strict matronly tones advised them all to put the Scottish people first for once ‘and end its obsession with trying to tear Britain apart’.

The chamber roared so hard it rattled.

Mrs May returned to her seat looking faintly startled. Not even when she was Prime Minister had she ever received such an enthusiastic reception.

Stella McCartney earned HALF of what she took home in 2017