Here comes the SHROOM BOOM! Gen Z’s party drug of choice, may be illegal but is up for debate with some claiming it has mental health-boosting ‘vitamins’

Harry first tried magic mushrooms at his office Christmas party. It was 2021 and the 25-year-old was working for a glitzy creative agency in London’s Soho. A colleague with a bag of weird-looking dried fungi offered him some. ‘I had the best night of my life,’ Harry says.

Now he regularly orders mushroom-laced chocolate bars at £40 a go from an encrypted messaging app that’s popular with drug dealers. Harry says he takes them on nights out and that you get the same buzzy high as cocaine, ‘but without the feeling of wanting to blow your brains out the next day’. Plus, psilocybin ‒ the psychoactive compound found in over 200 species of mushroom ‒ is not considered addictive. Recently, at a friend’s birthday drinks, Harry offered the psychedelic chocolates to the table, saying, ‘Trust me, just try them.’ The next day everyone messaged him with the same question: ‘How do I buy that chocolate?’

Harry and his friends aren’t your usual art student, magic-mushroom types. They went to Russell Group universities; plenty of them work in finance; some of them play cricket at the weekends. But this is precisely the thing: shrooms are no longer the preserve of festival goers and art students – they’re everywhere. 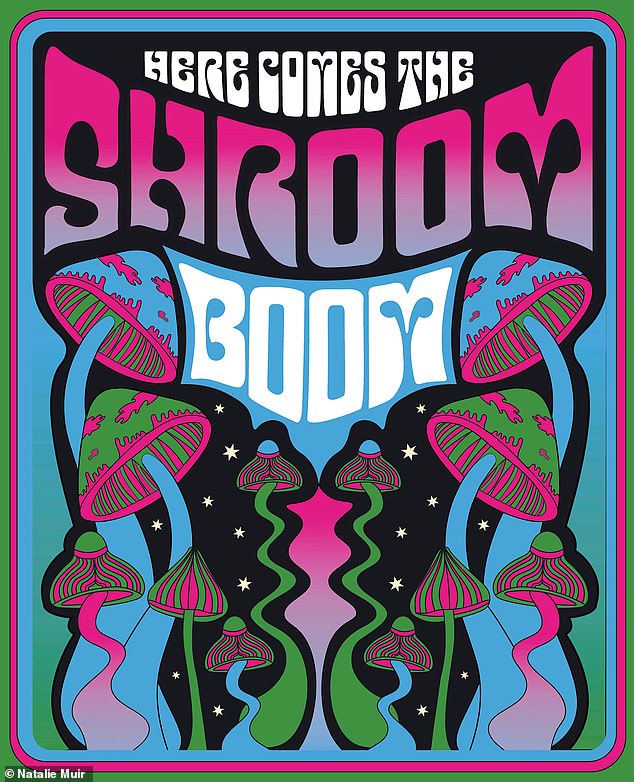 In 2005 the government’s Drugs Act made all magic mushrooms a Class A drug. But, as far as Dr David Nutt is concerned, those laws could be about to change

Maybe the moment mushrooms went fully mainstream was last month when Kerry Katona – former Atomic Kitten band member, sometime Loose Women panellist, and a 42-year-old mother-of-five – revealed that she had experienced a professionally guided mushrooms trip with her fiancé Ryan Mahoney during a family holiday in Spain. Or maybe it was in 2019 when pop star Harry Styles, 28, revealed that he recorded his album Fine Line while high on hallucinogens. Styles said he took so many mushrooms that he accidentally bit off the tip of his tongue and had to record a song with blood pouring out of his mouth. ‘Mushrooms and Blood,’ he mused to Rolling Stone. ‘Now, there’s an album title.’

So, what is all the fuss about? For hard-partying Gen Zers, mushrooms have become the drug of choice because they seem more ethical. In the 90s, clubbers took cocaine and no one cared. These days, young people have to marry their late-night antics with their social consciences.

Alice, a 26-year-old magic mushrooms enthusiast who works in digital marketing, likes them as she doesn’t have to think about dealers and supply chains. Cocaine is seen as unsavoury and unwoke ‒ but if you want mushrooms you can pick them from the ground yourself. ‘They’re guilt-free. They’re natural. They’re sustainable,’ Alice adds.

They’re also illegal. For a while there was a loophole that meant that only dried magic mushrooms were banned in the UK. More than 400 shops across the country flogged fresh fungi with no consequences. But in 2005 the government’s Drugs Act made all magic mushrooms a Class A drug. Possession can fetch you up to seven years in prison, an unlimited fine or both.

Of course, magic mushrooms can still be found in abundance across the country. One guide (magicmushroommap.com) plots, in real time, where they are growing. But pickers need to do their homework as some mushrooms are poisonous. According to a blog post from the pro-psychedelics site mushies.co.uk, the only way you might legally get away with taking shrooms is if you ‘pick them from the ground with, say, your mouth, before swallowing them immediately’. Although, the writer adds: ‘I’m not sure anyone’s ever tried this in front of a police officer.’

But, as far as Dr David Nutt is concerned, those laws could be about to change. Nutt, 71, is a former government drugs tsar and professor at Imperial College London. He has studied psilocybin for 20 years and wants to see it legalised for medicinal purposes. Last year, he helmed a small study at Imperial that tracked 59 people with moderate-to-severe depression. Half of the patients were given two large doses of psilocybin and the other half were given daily doses of escitalopram, a leading antidepressant. After six weeks, the mushrooms were performing just as effectively as the antidepressants, and patients in the psilocybin camp were experiencing fewer side effects.

Psilocybin works because it dampens a part of the brain that drives depression, says Nutt. Therapy and antidepressants do that too, but they can take weeks or even months to have an impact. With mushrooms, he says, you get results ‘almost immediately’. This, he says, is proper progress. When I ask Nutt if he thinks mushrooms will be legalised for medicine in his lifetime, he says it could take five more years. ‘So let’s hope I live that long!’

There are arguments that shrooms have anti depressant properties

It could be sooner. Last month, a start-up facility for psychedelic drug trials called Clerkenwell Health began another mushroom-focused clinical trial. Its team is testing to see if a combination of psilocybin and psychotherapy can help terminally ill cancer patients with their mental health. It’s the sort of thing you’d expect from the techy types in Silicon Valley, but Clerkenwell Health is based in a swish office just off London’s Harley Street. Britain is in a ‘unique position to capitalise’ on these sorts of trials, says CEO Tom McDonald: ‘The country has a unique ability to fast track innovative medical facilities.’ (Look at how quickly we rolled out the Covid jab.)

But what about the people who don’t suffer from depression? Or those who aren’t Gen Zers and want a guilt-free night out? Why would they want to take magic mushrooms? Sarah, 49, started microdosing psilocybin in 2021. She had heard good things about it through friends and wanted to see what it was like. Now, once a month she and her husband order £60 worth of pills from a woman on the internet. Each tablet contains tiny amounts of psilocybin and Sarah takes one every three days, first thing in the morning, like you would a vitamin.

‘For the first few weeks it had a slightly speedy effect,’ she says, ‘but after a while, you can’t feel it chemically.’ Instead, Sarah noticed she was focusing better, working faster, and thinking more creatively. But, best of all, she was happier. ‘If you get to my age, and you want to have fewer wrinkles, you might entertain Botox,’ says Sarah. ‘I see psilocybin as being like that, but for your mental health.’

She adds: ‘There’s this thinking that the only time you should engage with your mental health is if it’s bad, or if you’re broken. But I don’t think that’s the case. There’s lots to be said for working on your wellbeing at any time. In fact, it’s crucial because it informs everything else. I don’t have a problem with trying to become the best version of myself that I can be.’