Social media has made a monster out of me. In the olden days (“the ’90s”), it used to be that you watched what was on, got your news from a central source, devoured trashy supermarket tabloids for gossip, and waited by the phone for Tom from Preston to call you back and tell you he had a great time on Friday and could we do it again soon, and when he didn’t, you could pretend he was just dead. Media was broad and shared and you got what you got and it kept you humble.

Now, I watch what I want when I want. I get my news from the most reputable sources (the headlines on The Age and SMH Twitter feeds and that one Instagram that posts digestible news bites and occasionally Harry Styles photos, just ’cause) that reflect my own beliefs and interests. I can watch my mediocre dates lose interest in me in real time. 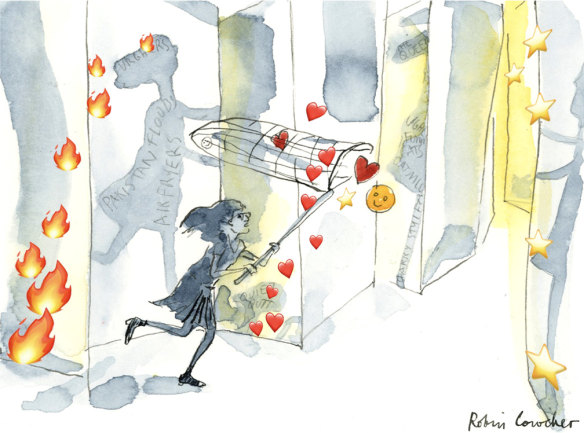 Everything I want is at my fingertips, available on demand, and it has unhinged me and everyone I know.

If my Bumble match doesn’t message me after our night out on Friday, I can tiptoe off to Instagram, Twitter, TikTok, Facebook, Messenger, WhatsApp, LinkedIn, and their long-abandoned Tumblr to find out precisely when and why they started ignoring me, sinking into a state of psychosis completely devoid of rational thought or personal boundaries.

This might sound crazy, even terrifying, but when my friend’s boyfriend’s phone died recently, when all the usual socials came up short and she became worried he’d been hurt, the group chat suggested she access: his Google Maps history to find today’s job site; their shared bank account to see where he’d bought lunch; even his FitBit account to check that he had an active heart rate. Her paranoia built and our ideas reached absurd new heights with each dead end. He walked through the door at 5:45 to hysterical relief.

The fugue state broke, and we all returned to our own social feeds, where we were reminded that the world doesn’t revolve around men who ghost you or just forget to charge their phones. It actually revolves around you. Per the million-dollar algorithm catering to your every thought and fantasy, you are the axis the planet turns on.

You like raccoons, so the whole internet likes raccoons. You like your news with a dash of celebrity gossip, so real-life Gossip Girl @DeuxMoi posts a salacious blind item just for you. As you scroll, your world – the world – comes to life: air fryer recipes, flooding in Palestine, skincare, human rights violations against Uighurs, female empowerment with a sprinkling of misandry, exceptionally stupid orange cats.

If something disgusting shows up — pimple-popping videos, or something about everyone’s least favourite Chris (Pratt, obviously) — all you do is tap not interested and they disappear forever, like they never existed. You scroll and swipe and teach the algorithm what you like, and it replies, informing you what you’ll like next. Claw clips and quiet quitting and oat flour and divine masculinity.

When an entire universe is constructed around your interests, it’s hard not to view yourself as the centre of it all.

You craft your perfect post, well-lit and filtered and yearning for validation, hit publish, and wait for your dopamine receptors to light up like fireworks as the reactions roll in. At last: a way to have your value calculated through quantitative data. You are worth only as many engagements as you can pull in.

There will always be some trend to chase, a meme to reinvent, a new filter that eliminates the acne scar on your chin, some untapped audience who will appreciate your wit and candour. The push and pull of attention, regardless of your status, is a ruling force in your social and professional success. Quitting just isn’t an option any more.

We love the access and the echo chamber. The toe-curling chemical rush designed for you by behavioural scientists and computer engineers in Palo Alto. We’ve sold privacy for entertainment, and though we complain, most wouldn’t change a thing.

We’ve said a long, slow goodbye to one-size-fits-most media, and it’s left us chasing the elusive high of external validation. We’ll be running forever, or at least until our collagen stores are nil and we can no longer trade on our entertainment value.

Is this narcissism, or is it entitlement? Ego or illness? A self-obsessed self-affirming sickness, or popular politics in a social climate? It’s both. It’s all of it. It’s everything good and bad and terrible in the world and baby, you’re the star.

When is Eid al-Adha 2020? UK date and how to celebrate the second Eid