Home » Lifestyle » ‘I feel like I’ve been underestimated my whole life’: Albanese puts critics on notice

Anthony Albanese has a message for his critics after seven months’ running the country: dismiss me at your peril.

“I feel like I’ve been underestimated my whole life. But here I am,” the prime minister says in an interview to set out his plans for the year ahead.

Albanese says it with a small smile of satisfaction after sweeping Scott Morrison out of power at the May election and watching the Coalition agonise over its time in power after revelations of the former prime minister’s multiple secret ministries. 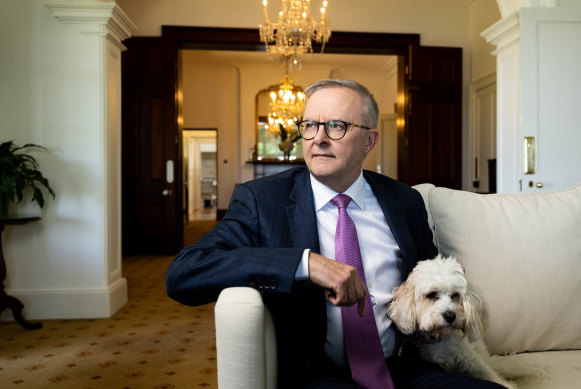 “I didn’t have a sense of destiny of being prime minister of Australia,” Albanese says. His family background – he was raised by a single mum on an invalid support pension – meant he was never regarded as the man most likely to get the keys to The Lodge.

“I regard it as an incredible privilege,” he says. “I’ll never take it for granted.”

Speaking at Kirribilli House in Sydney on a warm day with a cloudless sky, the prime minister seems as content as his constant companion, Toto the cavoodle, who rests by the door as he talks. He is out of COVID-19 isolation and ready for 2023.

What was he proudest of this year?

“I think resetting Australia’s position internationally,” he says. “And part of the precondition for that, as I’ve said, is action on climate change. It is the entry fee into the room of goodwill in international relations.”

Albanese was on a RAAF flight to Japan to meet United States President Joe Biden and other leaders within 48 hours of winning the election. He lists every visit since that Quad meeting in Tokyo as well as the work of Foreign Minister Penny Wong in flying to capitals across the Asia-Pacific.

A lifelong campaigner for the Labor left, Albanese is now absorbed in the world of national security and talks at length about the need for the US alliance. He positions himself as a better manager of international affairs than Morrison. “It’s been a major turnaround in a relatively short period of time,” Albanese says.

But the domestic agenda has its own emergencies. Albanese goes into the new year with households bracing for an economic storm. All the forecasts say growth will slow, the cost of living will rise, and real wages will fall. In fact, Reserve Bank forecasts suggest inflation will stay so high for so long that real wages will be lower at the next election than they were at the last one for millions of workers.

“We have an economic plan to lift living standards, to grow the economy, to create opportunity,” Albanese says.

But will wages grow?

“Well, that is precisely the plan,” he says. “But you grow wages not by just saying it. You grow wages by putting in place structures that boost productivity, that boost business opportunities, that grow the private sector, that grow jobs. We have a plan to do that, and a plan to make sure it’s inclusive of growth as well.”

There’s no guarantee there. The plan also tries to help Australians with energy costs, yet the government’s own estimates suggest household electricity bills will rise 47 per cent over two years even after the new price controls on coal and gas – although that is before the government spends $1.5 billion to trim the bills for those on income support.

Albanese defends the price caps and long-term pricing powers that critics call a “declaration of war” against energy producers. To some, it’s a takeover of the free market. To Albanese, it is an intervention in a market that was no longer functioning in the national interest.

He talks as if the uproar will blow over after weeks of criticism from exporters about the energy plan and earlier from business about industrial relations laws that will allow multi-employer bargaining so a single union can negotiate the same deal with companies across an entire industry.

“I’m saying that over a period of time, some of the criticisms which have been put will prove to be unfounded,” he says.

So he can call business leaders on speed dial to smooth things over?

“I can call just about all of them when I need to,” he says. “I have relationships that have been built up over a long period of time. And a relationship of trust is one that’s forged in difficulty. And you get trust when your word can result in action.”

And there is also the Indigenous Voice to parliament – the referendum he promised in his victory speech on election night and something he wants done by this time next year.

Albanese does not hide his amazement at the bloodletting within the Coalition since Morrison lost power. He has just read Niki Savva’s book about the past three years, Bulldozed, and has been struck by the way Liberals are so damning about the former prime minister.

“I still cannot imagine the mindset that caused Scott Morrison to appoint himself to multiple ministries. But even that aside, I think the other problem really – the deeper problem – is that people sat back and allowed that to happen,” Albanese says.

But hasn’t Labor torn itself apart in the past? How can Albanese be so sure the party will avoid the backstabbing and out-of-control personal ambition that wrecked its last time in power?

“There are absolute lessons to learn,” he says of the Morrison era. Albanese claims to be avoiding the centralisation of power in the prime minister’s suite and is consciously trying to slow the media cycle rather than “win” the media every day. And he says he is sure he can avoid the turmoil of Labor in power under Kevin Rudd and Julia Gillard. 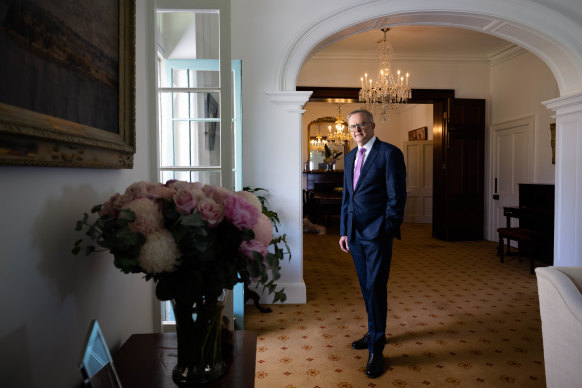 If there is a personal test for Albanese (pictured here at Kirribilli House) rather than a political challenge, it will be one he sets for himself.Credit:Janie Barrett

Can he avoid the spill fever that consumed governments over the past 15 years?

How can he be so confident?

“Because of the way that the government is functioning each and every day. It functions so that there are real debates occurring in the rooms where they should occur.

“I can’t recall in my entire time in parliament a more united team than we have at the moment.”

That is a big claim, given Albanese arrived in parliament in 1996, but the fine print in that sentence is the phrase “at the moment”. It is only the seventh month since victory.

If there is a personal test for Albanese, rather than a political challenge such as whether he can enshrine the Voice in the Constitution, it will be one he sets for himself. Asked about how he is governing, he cites his political mentor, Tom Uren, as a guiding light.

Uren was Labor deputy leader under Gough Whitlam after 1975 and a minister in the Hawke government. He served in the Second World War, was captured by the Japanese and made a forced labourer on the Thai-Burma rail line.

“He used to say two things. You’ve got to learn something new every day, and you’ve got to get better as a person every day,” Albanese says.

What is it about Uren that he seeks to emulate?

“His gentleness. He fought for the Australian heavyweight boxing championship. He was a big man with a big heart. He was tough. He survived Timor, Changi, the Burma-Siam railway, and Japan close to Nagasaki when the second atomic bomb dropped. This was someone who was resilient but who never, ever hated anyone. It’s quite extraordinary.

“He’s someone who also understood that change doesn’t occur just from the top. You’ve got to bring people with you on the journey of change.”

That seems an impossible standard to meet when the prime minister’s job is all about conflict. Do not expect Albanese to be merciful to his opponents. “I’m someone who is quite capable of standing my ground. Being gentle doesn’t mean that you can’t be tough at the same time,” he says.

There is another reason the standard set by Uren matters so much to Albanese. He was underestimated by many but not by his mentor. Uren died in 2015 and did not get to see the Albanese era. But he told Albanese in 2013 that it was his responsibility to run for the leadership, even though he lost that time to Bill Shorten.

And Uren told Albanese he could be prime minister. Perhaps it was destiny after all.

‘The Talk’ going on brief hiatus amid Sharon Osbourne investigation

Amazon Music Punches Into Podcasts, With Shows Including Originals From DJ Khaled, Becky G, Will Smith and More

Mosque shooter could serve some of his sentence in Australia