When it comes to airing the best unscripted coming-of-age stories, MTV is pretty much the pioneer. For years the network has produced series that have influenced generations — from Real World and Teen Mom, to even the Jersey Shore reboot – and it doesn’t look like they’re planning to slow down on the reality train anytime soon. In fact, MTV has four new scripted series inspired by Jersey Shore on the way, as reported by Variety on April 24, and fans of the franchise just may be obsessed with them.

According to Variety, the month of April has proven to be a big one for the network, since the April 5 premiere of the Jersey Shore Family Vacation, MTV has racked in a average of 2.1 million viewers every Thursday night. And MTV has a plan to continue the reboot’s success, hopefully owning Thursday night viewership with its upcoming line-up of Jersey Shore-like programming. While speaking to Variety, VH1 and MTV president Chris McCarthy noted that the newest shows coming down the pipeline will not only be worth the watch, but will also showcase parts of the country that entertainment has otherwise ignored. He said, 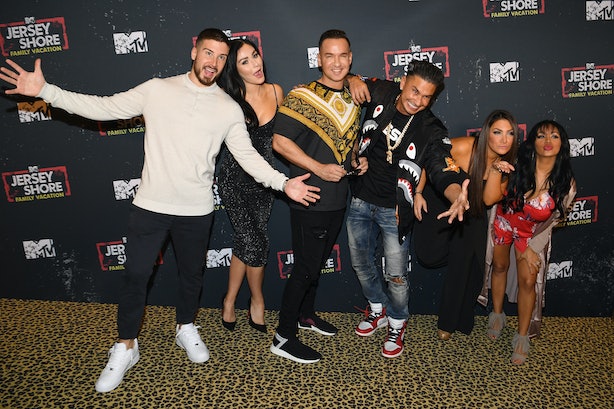 In some of MTV’s newest reality TV series, the network will focus in on groups of friends located in rural towns in Indiana and Kentucky. In Decator, Indiana, MTV will center around social media sensation Zach Holmes and his pack of close guy friends as they try out risky stunts and pranks. Entitled Too Stupid To Die, the show can also be compared to the another one of MTV’s supreme hits Jackass, as the half-hour program is said to have a daredevil edge. And just a few hundred miles south in Pike County, Kentucky, the network will explore the lives of six young people as they decide on their next steps after high school in Made in Kentucky.

But don’t fret — the network totally has something in store for those viewers who fantazie about life in the Big Apple, too. According Variety, MTV will welcome a tattoo competition into its fold entitled Just the Tattoo of Us, where family members will be challenged to design tattoos for each other blindly. And taking place in New York’s most southern borough, Staten Island 10310 will follow a group of young people as they navigate life in the concrete jungle of NYC.

So far, however, it sounds as though Staten Island 10310 will be the most like the famed beach side partiers fans have grown to love over the years. McCarthy describes the stars of the series as "very scrappy," and reading between those lines, it’s safe to assume that watching the Staten Island locals in their element will keep you on your toes, to say the least.

It’s no secret that Jersey Shore has garnered somewhat of a cult following since its 2009 premiere. And after seeing the massive ratings from the April 5 reboot premiere, to say that the franchise was missed would be an understatement. Fans have been tuning in faithfully each week to see their favorite Jersey socialites live their best lives, and in addition, have taken to Twitter to bask in the latest edition of nostalgia goodness.

If anything, MTV found a goldmine with Jersey Shore, and their soon-to-come Thursday night lineup will only add to all of its success.

Who was Colin Caffell and where is he now? – The Sun