The inquiry into the Victorian government's response to the coronavirus pandemic has shed light on how the state's transport authorities are preparing for the return of commuters when restrictions start to ease.

Speaking at the Public Accounts and Estimates Committee on Thursday, Minister for Transport Jacinta Allan said Melburnians would emerge from the pandemic with vastly different travel needs. 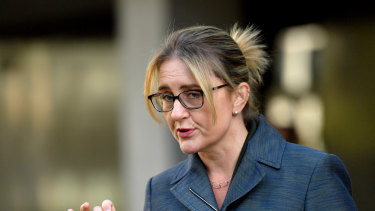 At the moment, she said, the city's public transport was operating at about 8 per cent of capacity compared to before the pandemic.

Metropolitan trains are at about 8 per cent capacity, trams at 7 per cent and regional trains at 6 per cent.

Comparatively, passenger numbers in February were around 2.35 million daily trips across the public transport network.

"If working from home becomes more of a feature of people's work and life patterns, then yes we need to think about the public transport provision," she told the committee.

To address the reduced need travel to the city, Ms Allan said the government was in talks with Melbourne City Council about fast-tracking the construction of protected bike lanes on key routes.

She also suggested it was likely there would be fewer people moving in and out of the city centre, but more between suburbs on local buses, and pointed to the government’s urban city rail loop project as a means of supporting that.

During the hearing, Ms Allan also faced a grilling over the use of the Skybus service to transport returned travellers during the coronavirus pandemic.

The Transport Department’s main role in the program was organising the transfer for passengers from Melbourne Airport to designated quarantine hotels.

When asked to explicitly name which agency was in charge of overseeing passengers on the Skybus Ms Allan said both ADF and Victoria Police had a role.

"Because we were dealing with international arrivals there was a role for Border Force in terms of the disembarkation of passengers off the various aircraft and also Victoria Police have a role to play," she said. 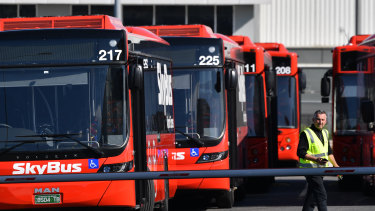 Ms Allan, like her colleague Jobs Minister Martin Pakula, refused to name which minister was tasked with overseeing the quarantine system.

She was asked by Nationals MP Danny O’Brien to name the minister "ultimately responsible for the hotel quarantine program".

The Transport Minister was also asked whether it would have been cheaper for the government to stop trains and trams completely after curfew during stage four restrictions and providing essential workers with vouchers for taxis or rideshares. She responded saying that train and tram networks have "big fixed costs", including the maintenance of tracks and stations that is required regardless of how many trips are made.

She said paying staff to run those services between 8pm and 5am were "quite a modest additional cost" comparatively.

The most important news, analysis and insights delivered to your inbox at the start and end of each day. Sign up to The Sydney Morning Herald’s newsletter here and The Age’s newsletter here.