Nurse, 22, with rare form of psoriasis brought on by a sore throat reveals she’s proud to show off her ‘leopard- print skin’ to prove everyone is beautiful in their own way

A nurse who developed ‘leopard print’ skin after getting a sore throat has stopped trying to cover up her body in a bid to prove everyone is beautiful in their own way.

Ashling Armstrong, of Belfast, Northern Ireland, said she first noticed red marks on her chest in January that she initially thought could be acne but within a week they spread across her entire body.

The 22-year-old visited the doctor and was diagnosed with Guttate psoriasis, a type of psoriasis that appears as small, red and scaly teardrop-shaped spots on the skin, the following month.

The gym-lover said she spent months covering angry patches on her red, scaly skin due to ’embarrassment’ – often mistaken for severe burns by gawping strangers.

But when they reached her face Ashling realised she could no longer hide them, so decided to share her condition online.

Ashling claims being loud and proud about her psoriasis is the ‘best thing’ she’s ever done as her confidence has since ‘sky rocketed’ and she’s been able to help many others in the process. 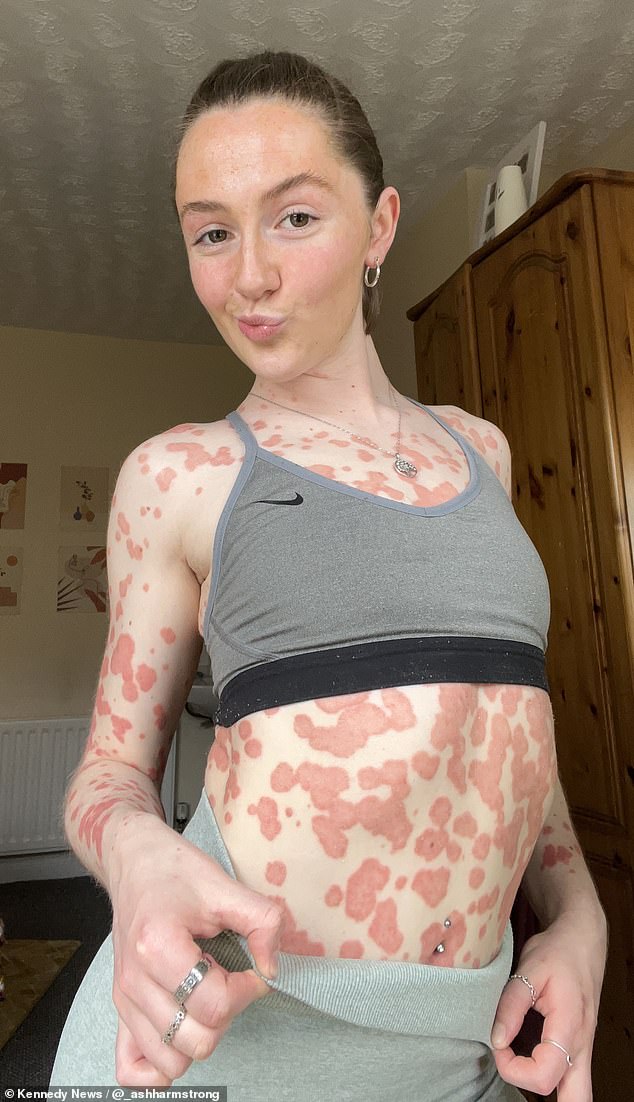 Ashling Armstrong, 22, from Belfast was diagnosed with Guttate psoriasis in January. The condition cases red spots to appear on the skin 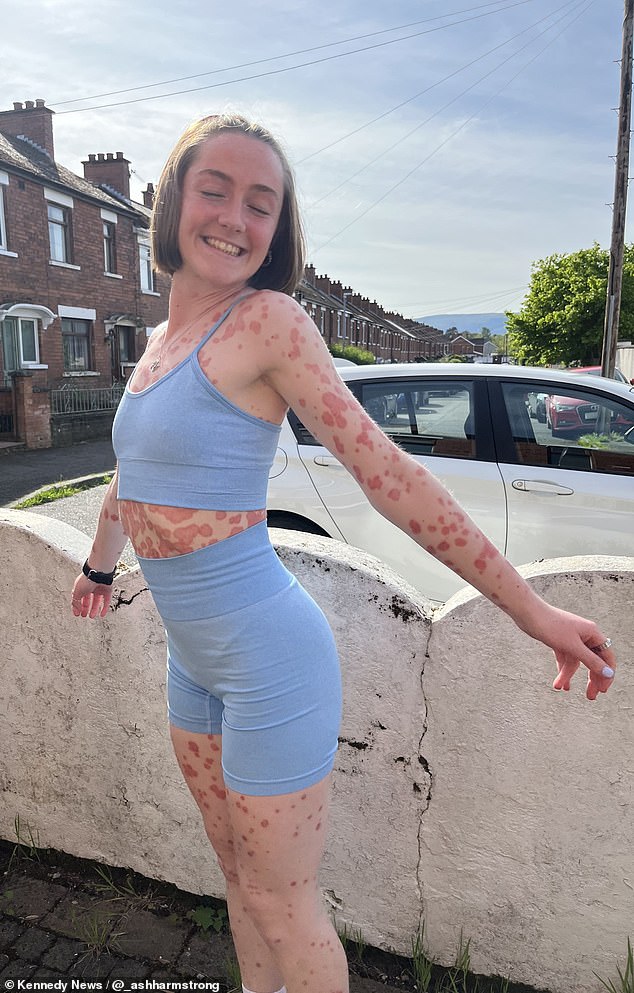 After months struggling to hide her spots, Ashling has embraced her new skin and raises awareness on the condition online 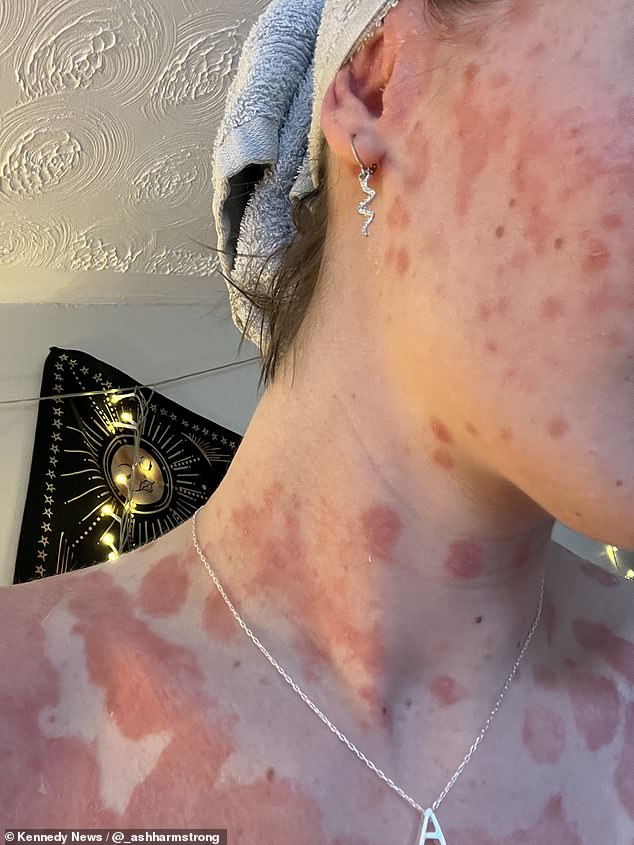 The nurse said she decided to stop hiding when the spots reached her face, and began to share pictures of her skin online

The avid reader regularly shares videos on her TikTok account in a bid to normalise psoriasis and is keen to spread the message that ‘everyone’s beautiful in their own way, shape or form’.

Ashling said: ‘I get people staring every day. I honestly don’t care anymore, I’m so past the point of caring.

‘I’m so happy with it and I know that I’m helping other people, so what the heck.

‘Sometimes if I see a large group of people walking, sometimes I will put my head down but I do try my best to keep my head up.

The spots also spread to Ashling’s back and legs, with her back being almost entirely covered in red dots 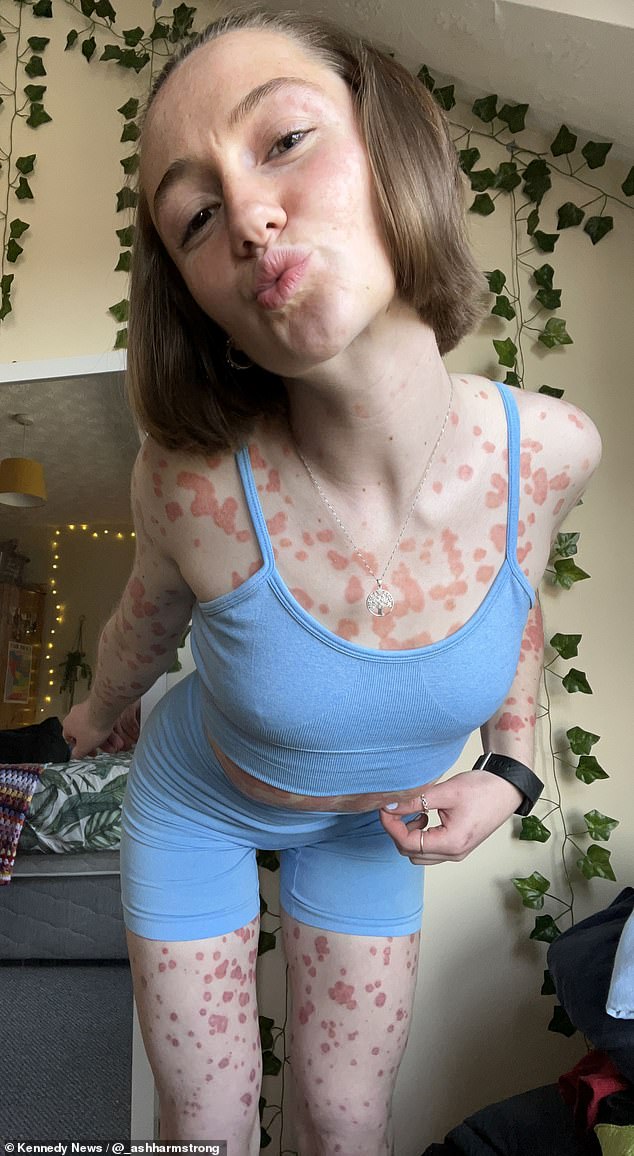 The nurse proudly showcases her spotted skin in her snaps and said she first felt angry about it, but now has embraced it

‘What I thought to myself one day, when I was walking back from the gym [when] I was just wearing a wee gym set with shorts – if you actually do look at it, it kind of looks like burns.

‘So I understand people staring and probably thinking, “Oh God, what’s happened to her? Is she a burns victim or something?”. I’ve thought like that as well.

‘At the beginning it made me very angry and a wee bit insecure and second-guess what I was wearing.

‘Now after everyone’s being so kind and I’m getting so much positive feedback, I just wear what I want. 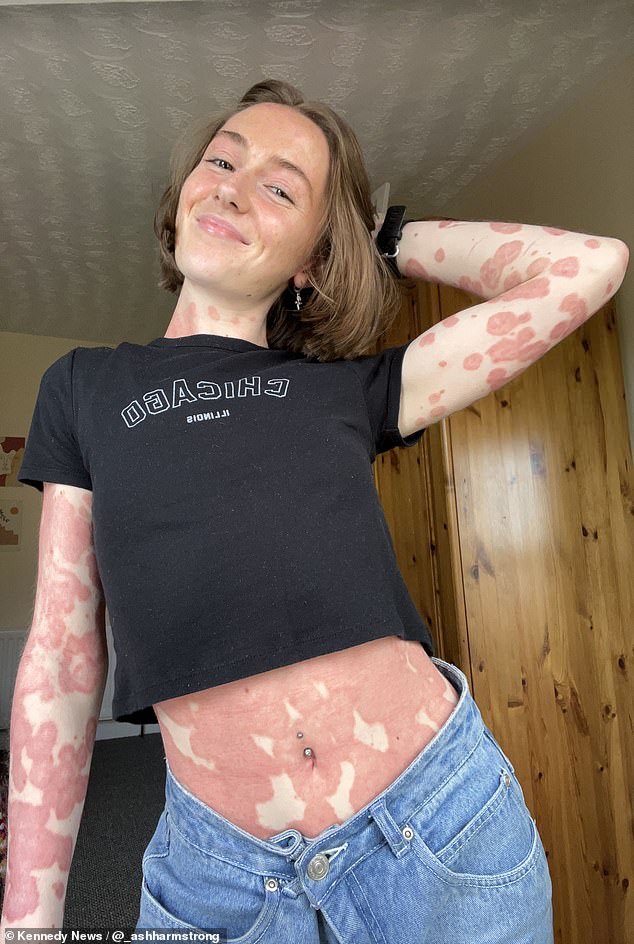 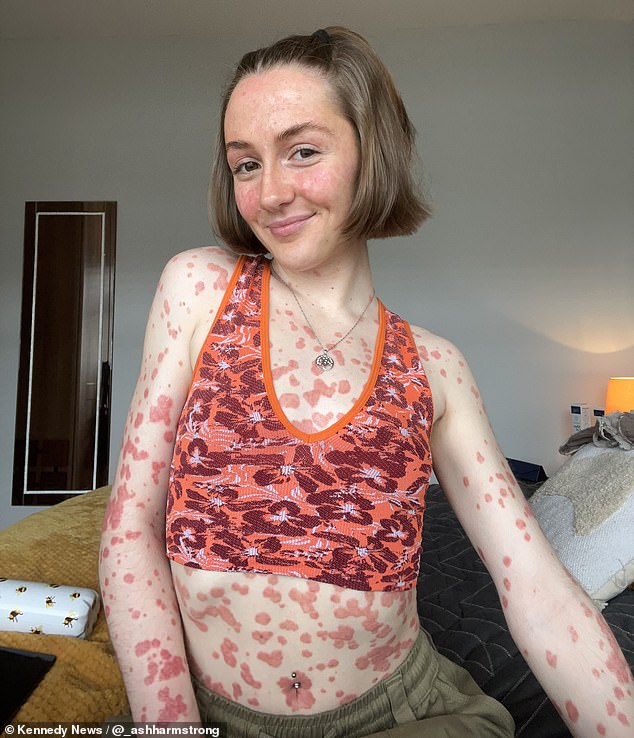 ‘The only word I can use to describe it is I feel powerful walking down the street, everyone’s looking at me. I take it as a positive thing.’

The newly-qualified nurse said that much of her psoriasis is now a faded red colour and that bits on her legs still have the distinctive teardrop shape, but it’s spread out on much of her torso.

Describing it as ‘scaly’, Ashling says using an exfoliator glove lightly in the shower before immediately moisturising helps keep her skin in the best possible condition.

Ashling said: ‘It started on my chest in mid-January. When I was younger I used to have really bad acne so I didn’t think anything of it. 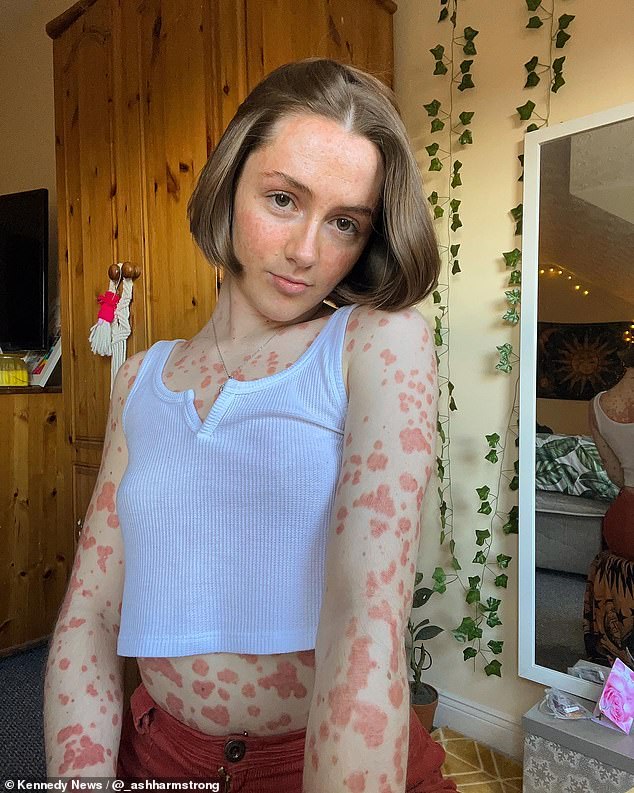 Ashling revealed the condition first appeared on her chest, but soon started to spread to her arms, bum, legs and face 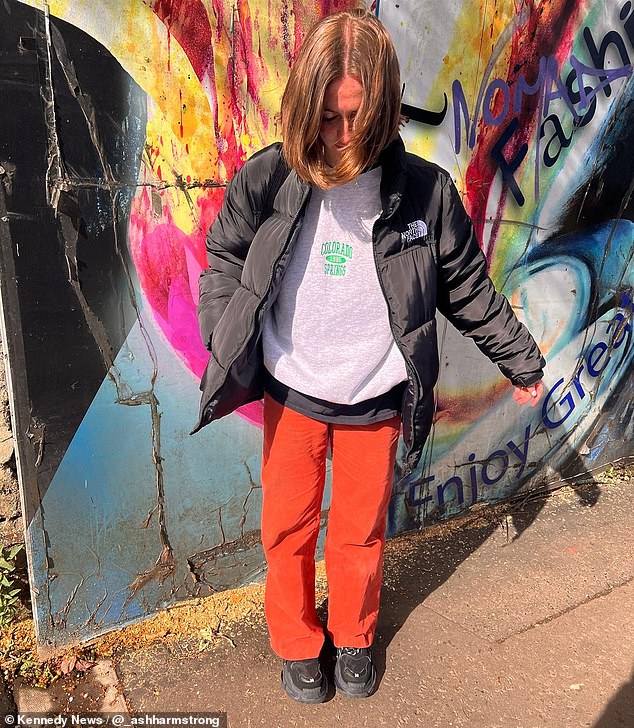 Before she learned to accept her new skin, Ashling admitted she would cover every inch of her body to hide her spots

‘My mum came up to Belfast the following week and asked to see my back and I hadn’t seen it myself and she said “Ashling, your back is completely covered”.

‘It was very mild at this point.

‘I went to the doctors and they diagnosed me with Guttate psoriasis, which got me down a lot.

‘I would say I’m a very confident person around the right people and in front of people I don’t know I wouldn’t really be as much, it did take a toll on me.

‘I was covering myself constantly. I was wearing a North Face coat when the sun was shining outside and was just really embarrassed by the whole thing.

‘I just didn’t want anyone to know about it so I was constantly wearing jeans, jumpers and just anything to cover it.’

Ashling claims she was told by the doctor that a sore throat she had around a month before her spots first appeared likely triggered her psoriasis. 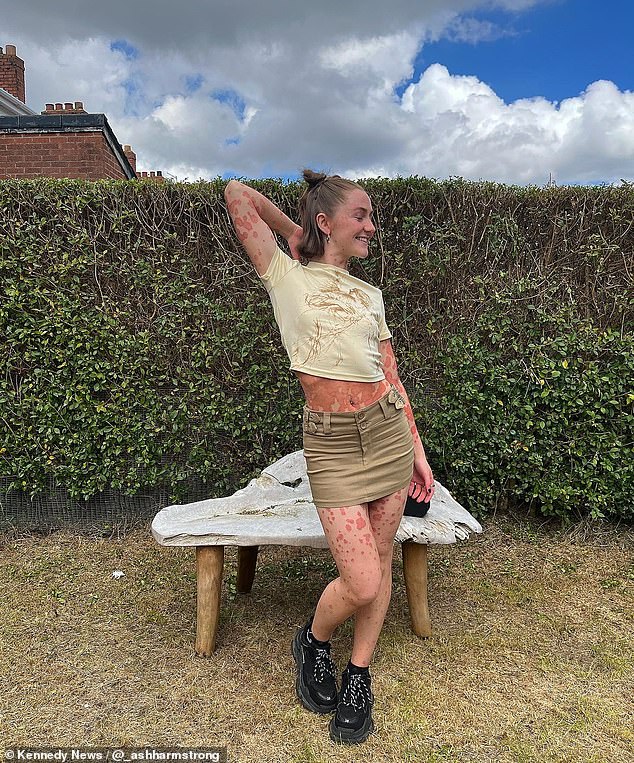 Ashling, who treats her skin with a gentle exfoliant and moisturiser, said she was told by her GP that a couch she had in early January might have triggered her psoriasis

Ashling said: ‘It came onto my face and that’s when I was like “I can’t hide this anymore”.

‘I was just sitting in my room one night and I was like ‘should I talk about this?’ I’m just sitting here, fighting with myself and it’s making me more stressed not telling anybody and hiding it.

‘I bought a top to wear after my psoriasis cleared up and it got to Easter Sunday and then I said ‘you know what, I really want to wear this top, I’m just going to wear it’.

‘I asked my friend if I should put up a post and she was like “yes go for it, what’s the worst that can happen? If anybody says anything it says a lot more about them to be honest”.

‘I posted it and it’s literally the best thing I’ve ever done in my life. I feel so amazing about it.

‘My confidence has skyrocketed, I can’t even describe it, it’s amazing. I feel really powerful.’

Psoriasis is an immune condition that occurs when a sufferer’s skin cells are replaced in just a few days rather than the usual 21 to 28 days.

This causes an accumulation of skin cells that build up to form raised plaques, which can be flaky, scaly, red and itchy.

Some sufferers have a family history of the condition.

There is no cure.

Ashling claims she was told by the doctor that her psoriasis would be gone within two to three months, but she still has it five months later.

She’s starting light therapy mid-June that she’s hoping will help to get rid of her psoriasis – but in the meantime she’s not letting it impact her living life to the full.

‘It looks like leopard print. I’m pretty unique, aren’t I? I stand out in the crowd.

‘I’ve had people message me saying that it looks like art on my body. It actually nearly made me cry, it was amazing and I thought that was so nice.

‘Posting on TikTok genuinely just makes me feel good about myself and when people comment and say I’m beautiful, I feel good.

‘Especially with this on my skin, being called beautiful makes me feel a lot better because you do feel that you’re ugly with that type of thing.

‘It’s one of those things, at the end of the day, we need to normalise it. Everyone’s beautiful in their own way, shape or form.

‘I’m going to Ibiza at the end of August and I’ve already said to myself that if I don’t get rid of this, I’m still going. And I’m wearing my bikini, I don’t care.

‘I’ll be wearing it all day and all night, I don’t give a damn.’

Ashling posts videos embracing her psoriasis on TikTok and has amassed more than 12,000 likes and comments from doing so.

Ashling said: ‘I had someone message me and she said that she’d love to post things and I told her “just go for it, do it”. 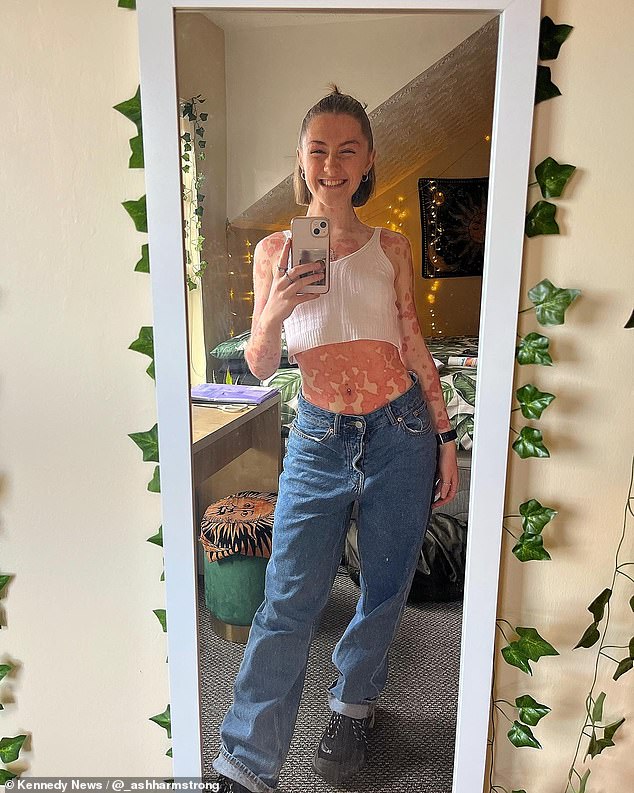 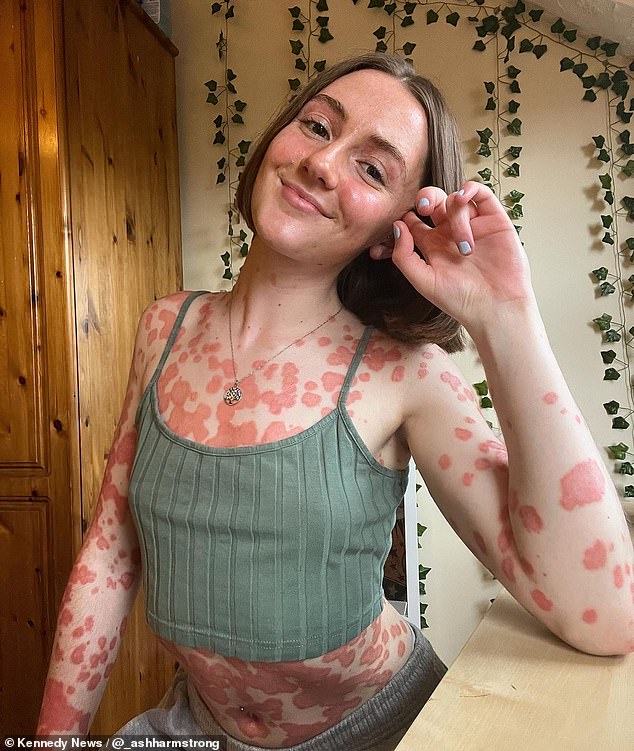 ‘She popped up on my for you page on TikTok and I saw that she put up a video of her psoriasis, so I inspired her.

‘I had a message from someone that said “I came across you on TikTok, you’re lovely and a breath of fresh air. I am a sufferer of psoriasis and you remind me that I need to stop crying and get on with it. I love your positivity”.

‘Anybody that’s also suffering with psoriasis has given me their top tips and what works for them, so I’ve tried anything and everything.

‘I’m honestly so thankful for everybody’s help, we’re all in this together.

‘I believe everything happens for a reason and me developing my psoriasis has definitely helped me to understand that whatever life throws at me I can always come out the other end, and I want others to know that too.’ 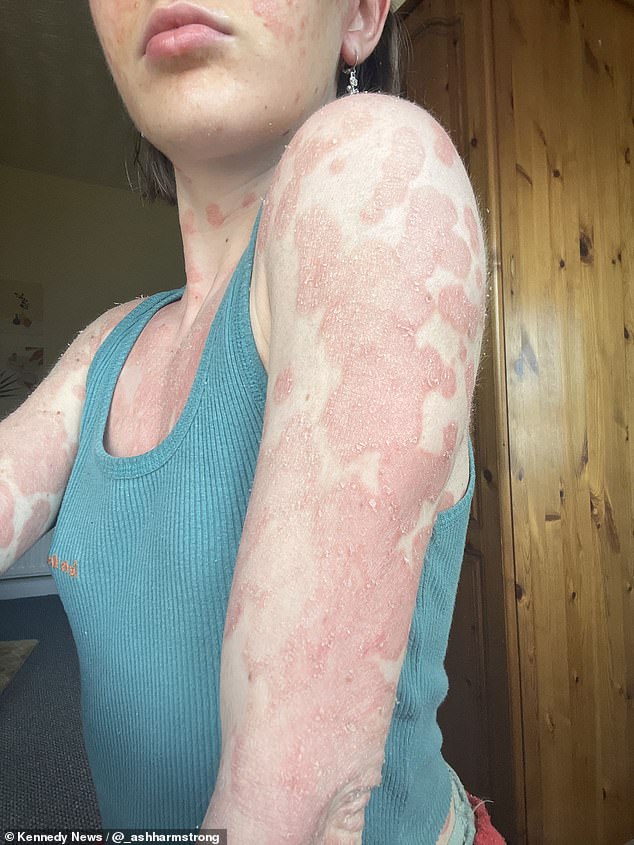