A major labor dispute is brewing at the site of the Kentucky Derby, the crown jewel of horse racing that will take place for the 147th time Saturday afternoon.

A group of unionized workers at Churchill Downs, the Louisville, Kentucky, racetrack that hosts the event, says the company that owns the track and others across the country has refused to meet their demands for modest raises and increases to pension benefits. Churchill Downs’ 13-member team of valets ― the workers who prepare horses and jockeys for each race ― have been working without a contract since last fall, and have yet to reach a new agreement with the billion-dollar company that owns the racecourse.

For now, the workers are hoping they can avoid a work stoppage that would take place during horse racing’s largest and most watched event.

“The S-word is the last thing that I want,” Ron Shelton, a Churchill Downs valet, told HuffPost on Thursday. “Just pick up the phone and call us. We’re willing to get in there and negotiate and reach across the table if they’re willing to do the same. And I believe we can settle this thing.”

But so far, Churchill Downs Inc. has refused to do that, the union says. And with Derby Day just two days away, Louisville’s labor movement is gearing up for the possibility of a work stoppage, protests, or any other course of action the valets might choose to pursue.

The Service Employees International Union on Wednesday authorized a potential strike at the racetrack, and SEIU Local 541, the racetrack employees union that includes the valets, is considering the next steps it wants to take. The Greater Louisville Central Labor Council, a coalition of 50 unions that represent about 50,000 workers in the city, also met Wednesday and decided that it would back a strike if the dispute reached that point.

“Louisville’s a union town, and the Kentucky Derby is union-made,” said Tim Morris, the labor council’s executive director. Morris noted that parimutuel clerks at Churchill Downs ― the people who take bets on each race ― are also organized, as are the workers who make the garland of roses that goes to the Derby winner each year. “So when one of our folks is attacked, then we want to support them however we can,” he said.

Valets are an integral but mostly unseen part of each race. A largely seasonal workforce, they often move from track to track as the racing season unfolds.

“Everybody knows Churchill Downs, but not everybody knows what we do to facilitate that,” said Shelton, who has worked at Churchill Downs for 37 years. “It entails a whole lot more than people think. You have to keep up, and you have to do things right, and hope to God you can keep any mistakes to a minimum because you don’t have time to correct them.” 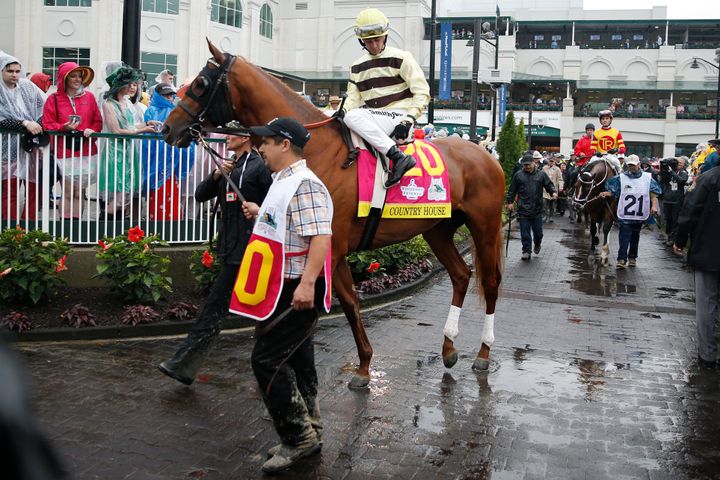 A work stoppage, if it comes to that, wouldn’t derail the Derby itself. But it could cause serious headaches for horsemen, trainers and race officials, given that the valets handle vital pre-race tasks, including saddling and numbering horses, preparing jockey silks and ensuring proper compliance with weight limits and other rules.

If a strike occurs, “either the executives of Churchill Downs are going to have to get out of their suits and get dirty, or they attempt to call in scabs,” said Pamela Newport, an attorney for the valets’ union. “Nobody that they bring in will be as highly skilled at this job as these guys are.”

Valets at Churchill Downs are currently paid a daily rate of $109, which amounts to roughly $16 an hour, according to union lawyers. The union asked for wage increases to $130 per day by the end of the three-year contract, along with a small increase in the amount the company contributes to valets’ pensions. Churchill countered with a proposal to increase the daily rate to $120 by the third year, but included no pay increase during the first year of the contract and no adjustment to pension contributions, according to union attorneys.

The union, Shelton said, has “come down quite a bit” from its initial ask, but Churchill Downs “hasn’t budged.”

Churchill Downs Inc. paid CEO William Carstanjen more than $10.5 million in 2019, a figure that amounts to roughly 450 times the median wage of the company’s employees, according to the AFL-CIO.

The valets “just want a damn slice of the pie,” Shelton said. “We’re not asking for anything out of the ordinary, or an inordinate amount.”

Valets at Turfway Park, another racetrack in Kentucky owned by Churchill Downs Inc., are also seeking the same pay increases, and want to move from an hourly pay schedule to a daily pay schedule that matches the one for Churchill’s valets. The Turfway valets have been working without a contract since April 2020.

The two groups are hoping to make contracts at the tracks more standard, so that valets have a better sense of the wages and benefits they’ll receive at both Churchill-owned properties, Newport said. Turfway valets, meanwhile, have not seen an increase in pension contributions since 1999.

In total, the union estimates that the raises and pension increases it has requested would cost Churchill Downs Inc., a company that earned more than $1 billion in revenue last year, roughly $27,000 per year.

Churchill Downs Inc.’s revenues took a hit in 2020 thanks to the COVID-19 pandemic, and the company reported a net loss of nearly $82 million. But it has already shown signs of a strong rebound: It reported $324.3 million in revenue during the first quarter of 2021, a 28% increase from a year ago, and hauled in $36 million in profits. The company also said it would bring in an additional $3.1 million in revenue from another facility it owns in Louisville, thanks to slot machines and off-track wagering.

Tonya Abeln, a spokeswoman for Churchill Downs Inc., disputed the workers’ claims in a statement, saying that the $27,000 figure was incorrect, although she did not provide Churchill’s own estimate of the costs. She also said that the company’s position is that negotiations at Churchill and Turfway should be kept separate, and that it is committed to reaching an agreement at Turfway between this weekend’s Derby and the start of Turfway’s racing season in December.

She said the company’s “last and best offer” to the union at Churchill Downs included a 6% pay increase for 2022, a 4% increase for 2023, and special pay for events like the Derby and the Kentucky Oaks ― the major race for fillies that takes place on the Friday before Derby Day each year.

“Churchill Downs’ proposed wages are higher than any wage offered by any other track in the region, with comparable racing dates,” Abeln said.

The union also wants Churchill to guarantee a minimum number of valets, in order to stave off job cuts or hours reductions. Abeln said that while the company had no intention of changing its historical minimums it opposed guarantees because the number of valets is linked to the number of horses who enter each race.

Churchill’s 13-member valet crew works 70 days each year, before moving on to other tracks, Shelton said. They also derive income from commission-based agreements with jockeys, who pay a share of earnings based on the work valets do preparing silks and providing other services during race days.

But the overall number of races and race days has declined in Kentucky and nationwide from the sport’s peak. Companies like Churchill have replaced some lost revenues through other forms of wagering, but the declining number of race days has made it harder for valets like Shelton to make ends meet, which is why they don’t want to further delay annual increases for another year.

The workers have won support from leading lawmakers across Kentucky, including members of the state legislature and Charles Booker, a Democrat considering a U.S. Senate run next year. Kentucky Gov. Andy Beshear (D) also appeared to offer his support to the workers in a tweet this week. Crystal Staley, a spokesperson for Beshear, said that he has offered the services of his Labor Cabinet secretary to help mediate the dispute.

Churchill’s stance in negotiations, Shelton said, has made him feel underappreciated by corporate executives who don’t realize how important valets are to their business, and damaged his love for a sport he’s been involved in for more than 40 years.

“I wish some of the people at Churchill Downs would come up here and watch [what we do],” Shelton said. “Nothing against them, but they were ignorant of our job and our duties and everything. How could you have a foundation to bargain with someone, telling them what they’re worth and what they aren’t, when you don’t even know what the hell they do?”

‘Cruel’ drunk woman drowned her pet cats in her own TOILET

Ivirlei Brookes On Becoming the Unexpected Voice of Change