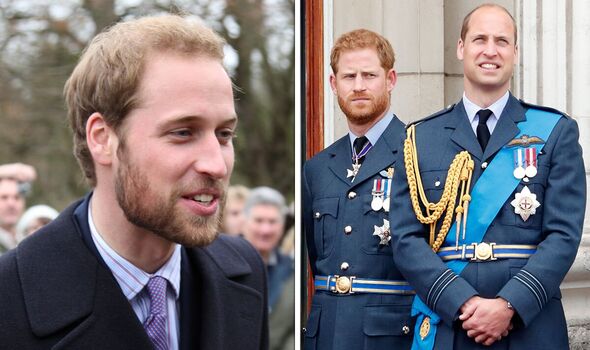 In the interview with ITV ahead of the release of his memoir, Spare, Harry said: “I mean, I refer to it as heir/spare but also older brother/younger brother, right? There’s a level of competition there. And again, writing this, I remembered that William had a beard himself and that Granny and other people, the ones to tell – told him that he had to shave it off.” However, the royal stood his ground and kept his beard for his wedding. Harry still has a beard now, while William does not. However, a hair expert has said William would look good with facial hair.

He said: “Prince William isn’t well known for having facial hair, and while pictures do show he has sported a thick beard and moustache in the past, his current image is far more clean-cut.

“Given the Prince of Wales is quite thin on top, a beard could balance out his face and make his thinning look less harsh.”

However, it seems to Jack that “royal protocol doesn’t support beards”.

He continued: “Prince Harry supposedly had to ask permission from the Queen to get married with a beard, and there are very few pictures of men in the main Royal Family sporting facial hair.

“This isn’t down to them being unable to grow facial fuzz, with rare pictures showing the late Prince Phillip and King Charles capable of growing thick beards that would have any man green with envy – it’s down to public perception.”

Jack went on to explain that beards were once regarded as a sign of “power”, while, today, some believe they are unruly and unkempt.

The expert said: “Historically, beards have been seen as a sign of masculinity, wisdom, and authority, and in ancient cultures, beards were often worn as a symbol of status and power.

“However, more recently, beards have been laziness or a lack of grooming, especially in certain jobs and social spheres, with upper society generally preferring a clean-shaven look as this is deemed more professional.

“This could explain why Prince William is reluctant to grow a beard as, while beards have become far more fashionable, they likely still aren’t seen in a positive light in the Royal profession.

“Asking Harry to shave his beard could be a reflection of this, and may be an attempt to make him look more professional and in line with the rest of the Royal family’s image.”

Speaking to Tom Bradby, Prince Harry went on to say how he persuaded the Queen to let him keep his beard.

“Right? As almost like a shield to my anxiety. That was the time of my life when I grew my beard.”

“And I said, ‘well, I don’t believe that Meghan’s gonna recognise me if she comes up the aisle and sees me beardless’.

“I would feel very, very different without my beard, and that’s hard for people to understand who’ve never grown a beard.

“But, hopefully, those beard people out there will go, ‘yeah, no, I fully get that, I can understand’.”

While Harry still has a beard, the last time William was seen with facial hair was in December 2008.

Aldi refuse to sell alcohol to man, 66, because he’s with 26-year-old daughter

40 years on, what pride for a part in one of history's greatest feats

No Matter Your Pocket Knife Preferences, Huckberry Has Options