‘You seem to enjoy complaining’: Owner of North Staffordshire pub hits back at a Tripadvisor reviewer who criticised him for spending time in Wales and moaned about the ‘bland food’ and staff taking breaks

The landlord of a North Staffordshire pub has blasted a diner who left a scathing one-star review on TripAdvisor criticising the food and staff – as well as the landlord himself for ‘spending time in Wales’.

According to the reviewer ‘Leek’, they did not enjoy their visit to the Travellers Rest in Stanley village, despite it having an average four-star rating, and being ranked number 28 out of 584 restaurants in Stoke-on-Trent.

And the owner Steve B was not happy about the one-star write-up, accusing the reviewer of being someone who ‘seems to enjoy complaining’.

The review said: ‘The King is dead, long live the King. However, staff informed me that “he spends most of his time in Wales now”.

‘We have used the place for many years and, nothing but praise for the general management and high standards. 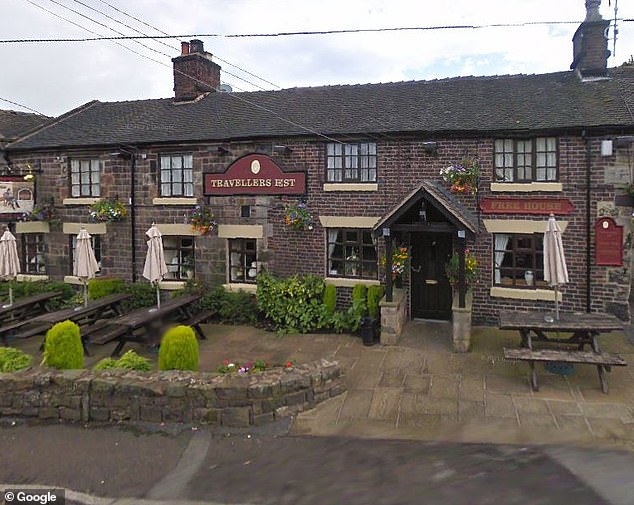 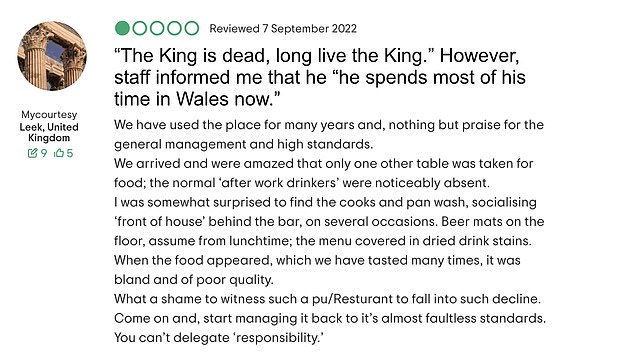 ‘Bland and poor quality’: the one-star review criticised a number of elements, including the staff taking breaks, and the landlord for spending times in Wales

‘We arrived and were amazed that only one other table was taken for food; the normal ‘after work drinkers’ were noticeably absent.

‘I was somewhat surprised to find the cooks and pan wash, socialising ‘front of house’ behind the bar, on several occasions. Beer mats on the floor, assume from lunchtime; the menu covered in dried drink stains.

‘When the food appeared, which we have tasted many times, it was bland and of poor quality.

‘What a shame to witness such a pu/Resturant to fall into such decline. Come on and, start managing it back to it’s almost faultless standards.

Replying to the review, Steve B wrote: ‘Thank you for your review. I’ll start with your heading, after what has occurred this week it really looks in poor taste.

‘Our apologies for the beer mats on the floor. However, these may have been knocked off by a customer and how you have managed to deduce that they had been lying there since lunchtime is amazing.

‘We are now checking the CCTV as to which members of staff were behind the bar during your visit as we know the table that you used on your visit.

‘Staff are entitled to have a soft during their shift. As you will be very aware it does get very hot occasionally, especially around the OVENS!’ 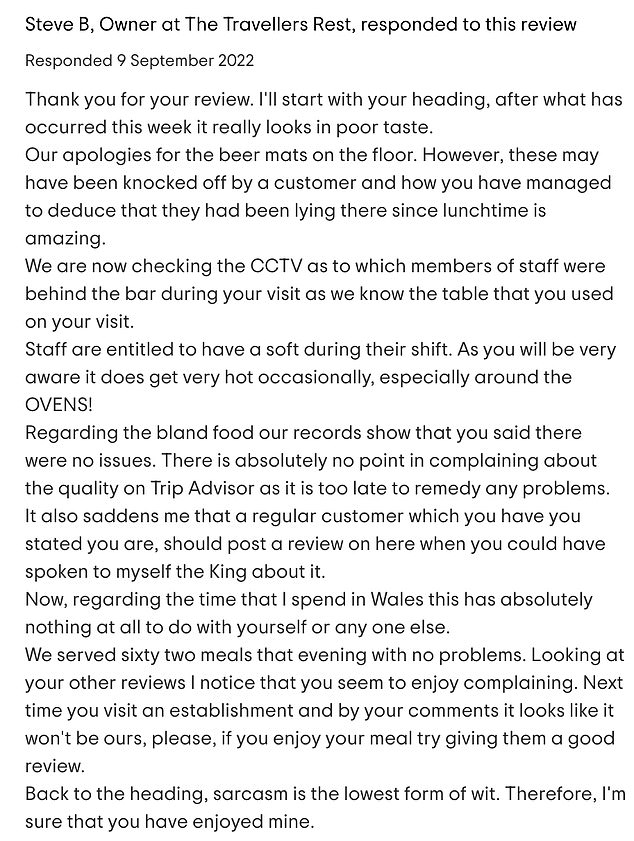 Pub owner Steve B took on the reviewer, addressing their criticisms, as well as branding them someone who ‘seems to enjoy complaining’

Next, he tackled the comments around the food, writing: ‘Regarding the bland food our records show that you said there were no issues. There is absolutely no point in complaining about the quality on Trip Advisor as it is too late to remedy any problems.

‘It also saddens me that a regular customer which you have you stated you are, should post a review on here when you could have spoken to myself the King about it.

‘Now, regarding the time that I spend in Wales this has absolutely nothing at all to do with yourself or any one else.

‘We served sixty two meals that evening with no problems. Looking at your other reviews I notice that you seem to enjoy complaining. Next time you visit an establishment and by your comments it looks like it won’t be ours, please, if you enjoy your meal try giving them a good review.

‘Back to the heading, sarcasm is the lowest form of wit. Therefore, I’m sure that you have enjoyed mine.’

The pub, which has a Tripadvisor rating of four, has received a total of 429 reviews, including 247 five-star and 91 four-star write-ups.

Despite the one-star review, the Travellers Rest has been the recipient of numerous positive write-ups

Among the positive reviews is one which says: ‘Absolutely unfaultable, great meal, real tasty and a great service, beer very good service excellent. I’ll definitely be back. Thank you staff.’

Another happy customer added: ‘Visited the travellers rest last night for a meal. Really impressed yet again. We came in the six of us and had mains and desserts. The service was quick and the food was delicious. Proper home cooked chips and a great atmosphere. One of our favourite pubs, we can’t fault it. Thank you travellers rest.’

And a further reviewer wrote: ‘We had a lovely meal there were four of us,we were made to feel most welcome. We enjoyed a splendid meal in a fabulous atmosphere served by really friendly staff .we will be back can’t wait.’