On Saturday, Premier Daniel Andrews released a statement in response to an Age report about a  corruption probe into his government awarding a $3.4 million contract to a union.

That news story, by journalist Paul Sakkal, came after the Independent Broad-based Anti-corruption Commission was granted an injunction in the Supreme Court that prevented publication of its draft report. 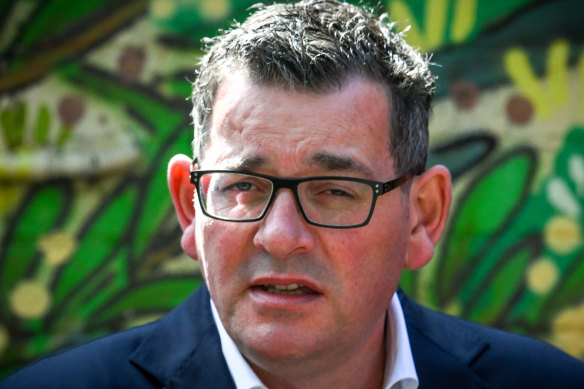 Andrews’ statement said he had acted “appropriately at all times and in all things.” It added: “Regardless of any smear, innuendo or media reporting based on anonymous sources, the only IBAC matters I will comment on are those that are the subject of a final report – as is appropriate and has always been my practice.”

During a Labor campaign press conference at a Northcote childcare centre on Monday, the premier repeatedly declined to explain what he meant by “smear” and “innuendo”. He also declined to answer questions about whether staff in his office had tipped off IBAC about the impending story before the anti-corruption agency sought the Supreme Court injunction.

Read an excerpt of the press conference transcript below

Reporter #1: There’s a clear attack on your character though, so if someone’s nervous about

Andrews: There is a lot of stuff said in elections…

Paul Sakkal, The Age: Are you aware of any conversations your office had with IBAC last week before they were granted an injunction? I am not asking to know what IBAC thinks of that, I am asking about the actions of your office, so the answer you were about to give wouldn’t apply to my question.

Sakkal: You were about to say “ask IBAC”, the start of your answer, but this is about your office’s actions.

Andrews: Seriously Paul – are you asking and answering the questions now? You should speak to IBAC about what IBAC has or hasn’t done. And in relation to any matters that may or may not be before the courts, any injunctions that may or may not have been issued, what you and me can and can’t talk about. Well, then, you should have a chat to IBAC.

Sakkal: Do you know if your office contacted IBAC before the injunction?

Andrews: My office behaves appropriately and that is beyond doubt. So, if you want to know what IBAC did or didn’t do – and you are kind of asking me about a matter that’s in the courts.

Sakkal: It’s not in the courts

Andrews: Well, an injunction then, that may or may not have been granted.

Sakkal: This question doesn’t go near the topic of the injunction. I am asking whether your office contacted IBAC on a certain day.

Andrews: I have answered your question, you can refer to my statement, I haven’t deleted my statement Paul, it’s there, and if you want to have a look at it, you should go and have a look at it, but if you want to know what IBAC’s doing, you need to ring them. The giveaway here, it’s independent, it’s in the name, they are independent, and I’m not their spokesperson, I’m just, I’m just not. And I’m not going to be commenting on things that may or may not be live, things that may or may not be in the court, things that certainly the government is not a party to, I’m not a party to it. So I’m not really sure what further I could offer.

Sakkal: So, you can’t speak to your statement?

Sakkal: What did it mean?

Reporter #2: Why can’t you explain?

Andrews: Because I’ve issued a statement and I’m not going beyond that. Please read the statement.

Reporter from another outlet #3: Is there further meaning behind that at all?

Reporter #3: What were you referring to when you said, “smear and innuendo?”

Sakkal: But the statement doesn’t explain it though, that’s why we are asking

Andrews: Again Paul, you can ask the questions and I’ve answered it. Please read the statement. I’ve got nothing further to add.

Reporter #4: Is the smear and innuendo sentence in that statement a referral to fact that there have been leaks?

Reporter #2: There must be something behind that though, like clearly you had something in mind.

Andrews: I have issued a statement. The statement has been issued and I’ve got nothing further to say.

Reporter #1: Would you separate out the [Herald Sun] story about [Andrews’ involvement in a 2013 car crash] from the story that Paul wrote about IBAC, would you separate those two stories out – is the smear about the bike accident and not [The Age’s] story?

Andrews: That statement didn’t relate to that.

Reporter #5: It didn’t relate to the bike accident at all?

Andrews: No, if you read the statement, it doesn’t relate to that …

Sakkal: So did “smear an innuendo” refer to the reporting on the IBAC matter?

Sakkal: It’s very unusual that you can’t explain a statement that has your name on it, very unusual.

Sakkal: I know you’ve issued it, none of us understand it.

Andrews: Well Paul, I’ve issued that statement and I’m not adding to it.

Reporter from another outlet #6: Are you having a dig at The Age?

Andrews: I’m not adding to the statement, and no media outlet is named in that.

Sakkal: You weren’t talking about the New York Times.

Andrews: Well Paul if you want to self identify, mate, go right ahead. But I didn’t, I didn’t mention you, not you personally and not the people you work for. I’ve issued a statement. And I’ve got nothing to add to that statement.

Reporter #2: Why would you issue a statement where the meaning of that statement is not clear, but you are essentially casting aspersions?

Andrews: Whether or not … no I don’t think that’s what I’ve done at all. I’ve issued a statement. It’s very clear, and I’ve got nothing to add to it.

Sakkal: Did you make the promise for the $2.2 million dollar election commitment in a meeting with the union?

Andrews: I’m not here to add to the statement that I have issued and the comments that I have made. If you want to know what IBAC is or isn’t doing, please go and have a chat to them.

Sakkal: I’m asking you about a government commitment announced publicly.

Andrews: It was announced publicly, yes.

Sakkal: And I’m wondering when you made the commitment in a private meeting to a union? That’s my question, I’m not asking about IBAC.

Sakkal: And was the press conference the first time you spoke to [HWU Secretary] Diana Asmar about it?

Andrews: Paul. Paul – I made a public commitment. And if you want to know about matters that may or may not be being looked at by an integrity agency, you should have a chat to them.

Everyone around the world follows the same 'seven moral rules' no matter where they live, British scientists find

'This Is Us' Season 6 Finale: Chrissy Metz Explains Next Steps After Show Ends

Putin promotes bodyguard to minister after predecessor fell to death