Households face a fall in their real incomes until 2024, the Reserve Bank has predicted, as a combination of high inflation, increasing interest rates and moderate wages growth squeezes the wallets of Australians.

In its most recent monetary policy update, released on Friday, the RBA admitted low-income households might have to cut spending as they struggled to deal with soaring prices for necessities such as food and petrol. 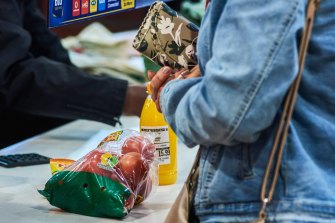 The Reserve Bank says lower-income households will struggle the most with the rising cost of essentials, including fuel and groceries.Credit:Bloomberg

The bank revealed it expects real disposable household income to fall for almost a year and a half, including a 3.1 per cent drop in the June quarter of next year.

In May, the bank was expecting household income to grow by 0.9 per cent in the final three months of this year. Now it believes they will shrink by 0.9 per cent.

Even by the end of next year, incomes are tipped to be going backwards by 0.9 per cent.

The bank said people would soon start to feel the impact on their home budgets, admitting those dependent on welfare payments could struggle.

“Higher prices, especially for food and fuel, are likely to impact low-income households
in particular (which tend to spend a larger share of their income on these necessary items),” it said.

“While household balance sheets are generally strong and many households should be able to absorb these price increases, others have limited savings buffers and may have to reduce spending elsewhere.

“For some of these more vulnerable households, the impact of price rises will be mitigated to some extent by the indexation of social assistance payments twice per year, though price rises will reduce
recipients’ real incomes in the near term.”

The bank downgraded all its forecasts for economic growth over the next two years. By December this year, it expects GDP to be expanding at an annual rate of 3.2 per cent, compared to its 4.2 per cent forecast made three months ago.

Consumer prices, despite the RBA’s lift in interest rates, are also tipped to grow strongly.

Inflation is expected to peak at 7.8 per cent in the December quarter, edge down to 6.2 per cent by the middle of next year and still be at 3.5 per cent in the June quarter of 2024.

Unemployment, however, is expected to defy the tightening in monetary policy. It is forecast to be at 3.4 per cent by the middle of next year and inch up to 3.7 per cent 12 months later.

“Employment growth could be stronger than expected, and strong household balance sheet positions could support household consumption by more than anticipated,” the report said.

“Alternatively, a decline in real incomes for the average household could weigh on spending more than expected, particularly if household wealth is also declining.”

Overnight, the Bank of England lifted official interest rates by half a percentage point to 1.75 per cent. It is now forecasting inflation to reach 13.3 per cent by October, the highest level since 1980.

The BoE, which apart from lifting interest rates is engaging in quantitative tightening, is forecasting the country to slide into a 15-month recession later this year with GDP to contract by 1.5 per cent in 2023.

Treasury is tipping the economy to expand by 3 per cent this financial year and 2 per cent in 2023-24, half a percentage point lower than forecast in the March budget.

So far this year, the RBA has lifted interest rates by 1.75 percentage points over four consecutive months, its most aggressive increase in rates in nearly 30 years.

How old is Jamie Laing, what's his net worth and does the Made In Chelsea star have any siblings?