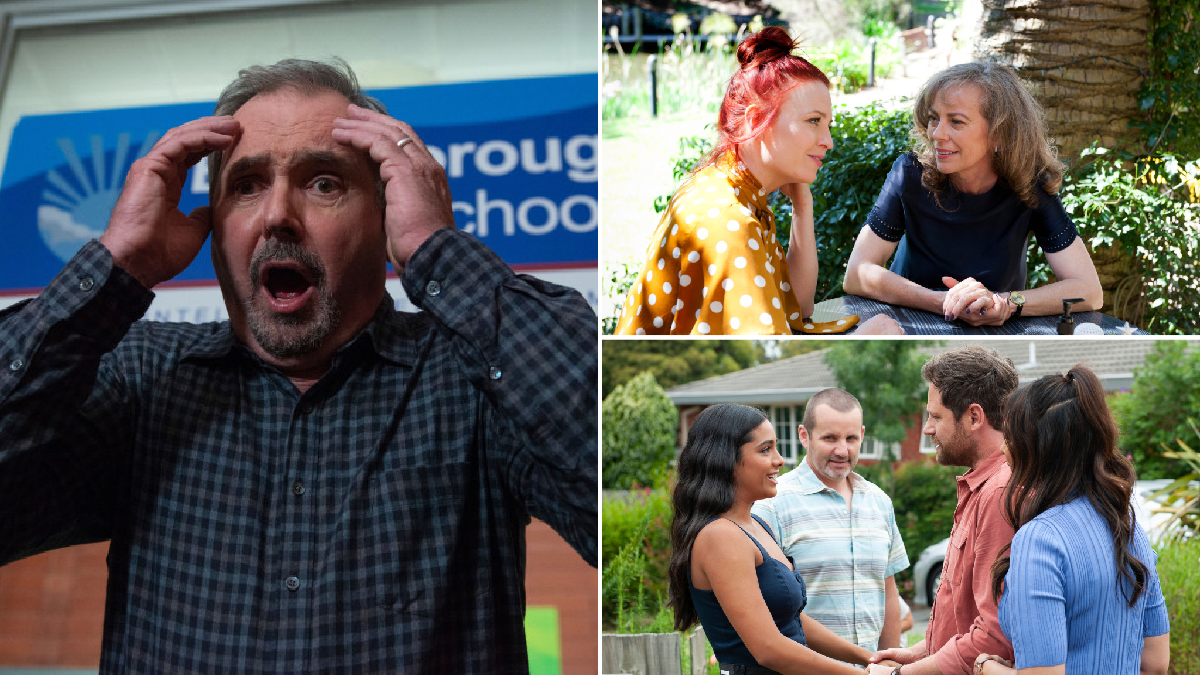 The Neighbours are in for a whole heap of plot twists this week when just when they think they know what’s going on, it’s all turned on its head.

Take Olivia (Alyce Platt) for instance. She’s in for on when her perfect plan comes unstuck thanks to Bea (Bonnie Anderson) hitting her with a surprise. But bungling Karl (Alan Fletcher) manages to undo Bea’s bid to save him. He really is his own worst enemy.

Shane (Nick Coghlan) and Dipi (Sharon Johal) are about to wave goodbye to the street, but their send-off doesn’t go to plan when Dipi’s leaving do goes awry. And to top it off, just as they’re leaving, one of their fellow Neighbours devastated by their departure reveals a plan to follow them to Sydney. Will they go?

Paul Robinson’s (Stefan Dennis) is up to something dodgy, but in his own plot twist, this time it’s not something he’s up to. It seems to be something he’s caught up in and it’s causing him a whole lot of bother. Terese’s (Rebekah Elmaloglou) Spidey-senses are tingling, but will she realise what he’s up to?

Nicolette (Charlotte Chimes) gets herself in hot water when she tries to pull off a plan against her mum that she hasn’t thought through.

And Bea has a plan up her sleeve but it could be about to open a whole new can of worms.

Here’s what’s ahead in Neighbours.

With Karl facing a criminal record, Olivia has the Kennedys right where she wants them. Not one to miss an opportunity, Olivia blackmails Susan by dangling a carrot – she’ll get Karl off the hook if Susan agrees to help write the book. Bea is appalled by the absolute cheek of it and knows she needs to protect her family. She comes up with a plan – that they go to the publisher and pitch their own juicy tell-all. Olivia is successfully baited and agrees to drop the charges, but just as she does, Karl puts his foot in it again. It costs them dearly and the Kennedys are forced to make a deal with the devil to protect him. With their new deal in play, Olivia holds up her end of the bargain and the charges are dropped. But now will Susan and Karl have a decision, do they keep their word?

Shane and Dipi have packed the last of their things and are ready to say their goodbyes. Dipi ties up loose ends by making Nicolette the manager of Harold’s and finds a way to stay close to Nell. But the Rebecchis are leaving a lot of sad friends in their wake, and to cheer up a distraught Sheila, Dipi arranges a fun night of Bollywood dancing. But things take a turn when their dancer arrives, as it’s definitely not the kind of entertainment she’d had planned!

Toadie is also devastated by the departure of his brother so just before they leave, he and Shane have one last wrestling match. And then it’s finally time to say their goodbyes as they head off in the hope of fixing their marriage in the city also occupied by the guy Dipi cheated on Shane with.

Nicolette has a plan up her sleeve. She convinces Clive to ask Jane to temporarily move in. For Jane, it’s poor timing – she thinks it’s all a bit fast. Of course it is, Nic is pushing for it rather than it happening naturally. Jane senses something and pushes Clive to explain why he suddenly wants them to go 100 miles an hour. And when he confesses to her daughter’s involvement, she is none too happy.

Yashvi to leave too?

With Dipi and Shane hitting the road it gets Ned thinking about the future. He pitches the idea that Yashvi and he move in together, but not only does she rebuff his offer, she has a clanger to drop. Ned discovers she has been looking into transferring to Sydney without telling him and he’s devastated. He confronts her and she tries to reassure him she has no plans to go without him and isn’t even sure she wants to go. It’s just an option. Will Ned be able to see she’s just reacting to losing her family?

Something is going on with Paul. In fairness, when are things not going on with Paul? He’s always a bit shifty. But this time, even Terese notices a change in his behaviour; he’s being a little suspect in his fixation on checking the finances of all of his businesses and is handling emergency repair work himself. Then he pulls an extreme move and fires Ned. It seems like money might be a factor here, is Paul’s empire about to start crumbling?

Bea’s not giving up

The Kennedys think it’s all over, but a whole new saga might be beginning. Bea isn’t ready to let sleeping dogs lie, instead she wants to tell the story in her own words. She wants to push forward with her own version, but Susan and Karl are not on board. Will this move do more damage than it’ll put right?