Can a reality show help these farmers find love? Eight singles whose rural lifestyles are a dating dead end invite potential partners to join them in the countryside (and muck in with the livestock!)

By his own admission 25-year-old Ed spends a lot of time with what he calls his ‘ladies’ – all four hundred and fifty of them.

He’s no rampant lothario though, for his lady friends are of the bovine variety. ‘They’ve got four legs and an udder and they’re definitely not my type,’ he laughs.

Make no mistake though, Ed would love to meet a female with two legs not four – it’s just that the demands of looking after the herd on his family’s 350 acre dairy farm make it tricky.

‘It wasn’t difficult to meet girls before I started working so much on the farm,’ he admits. ‘I used to go out partying quite a lot. But since I’ve had more responsibility I’ve done it a lot less. I’ve been pretty much eating, sleeping and working so it’s not easy to meet people.’ 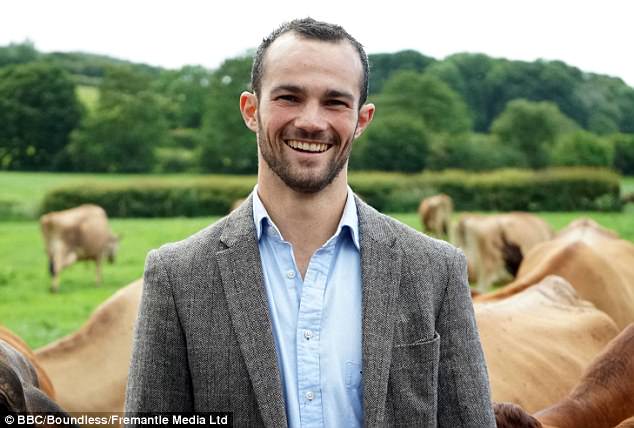 Eight singletons from rural ares of England entrust Sarah Cox to help them find love in a new BBC dating show. Ed, 25, (pictured) said he hopes to meet people from other backgrounds

It’s a dilemma faced by many farmers, whether they live in the highlands of Scotland or the rolling hills of Herefordshire. Step forward presenter Sara Cox, herself a farmer’s daughter, who is fronting a new BBC show in which she tries to help a handful of rural singletons meet the partner of their dreams – or even just a partner.

Ranging from twenty somethings to nearly sixty, her eight hopefuls are all united by a desire to step outside their country comfort zone to meet someone new – whether it be a fellow rural dweller or a city slicker looking to quit the rat race.

Alongside Ed, there’s 28 year old equine vet Heather from Yorkshire, 33 year old Worcestershire farmhand Paul and Yorkshire dairy farmer Peter who like Norfolk Farrier Mark is 42. There’s also Christine, 32, and Richard 39, both cattle and sheep farmers from Dumfries and Galloway. Last but not least is Wendy, a 59 year old pig farmer from Herefordshire.

Prior to filming, all eight posted detailed dating profiles online, asking potential suitors to write in.

The first episode shows them leafing through the letters they receive in order to chose a handful for a frantic face-to-face speed date – after which they must decide which three they want to invite to spend the weekend with them to try on their rural life for size.

Christine hit a hitch from the off: a cheerful Scot who singlehandedly runs a 250 strong beef and sheep farm, she barely got any letters at all at first and had to leave her profile up for longer in order to attract more interest.

‘It wasn’t ideal,’ she laughs now. Christine is a former embryologist who until two years ago was working in Edinburgh, only to decide to take the huge decision to move back home and run the farm on which she had grown up when her father became unwell. 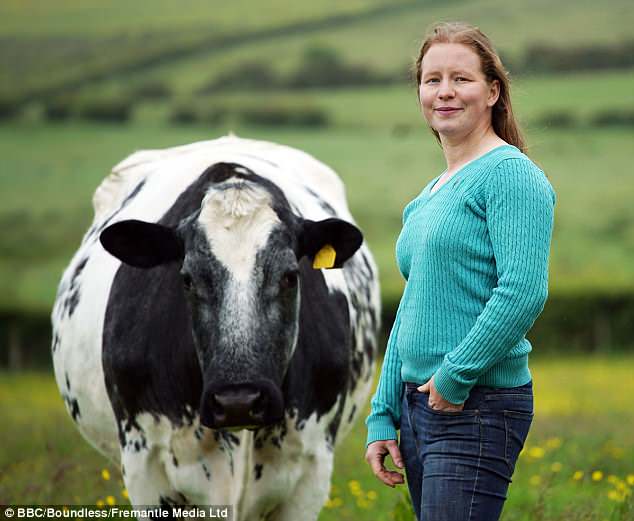 Christine, 32, (pictured) has been single for seven years and claims the extreme lifestyle of running a farm single-handedly can become isolating

‘I’ve got an older brother but he’s never been interested in agriculture so I was really the only person who could do it,’ she says. ‘It was either a case of me coming home or we would have had to sell up and get rid of everything which I didn’t want, so it was a case of coming home to see how it goes.’

Sadly her father died a few months later, and since then Christine has been running the farm single-handedly, a giant endeavour that frequently involves twelve hour days.

‘It was quite an extreme lifestyle change,’ she acknowledges. ‘You can get quite isolated. Where I live is not physically far from the nearest village but my work is quite all consuming so you can get stuck in a bit of a bubble.’

A bubble that has left little time for romance: Christine’s last relationship was seven years ago.

‘I had a pretty serious relationship in the past which didn’t end very well. I was quite hurt by what happened so I’ve put up loads of barriers and the situation with work and my dad made it quite tricky to do much about getting myself out there.’

Then there’s the fact that, in Christine’s words, she comes as a bit of a ‘package deal.’

‘If you want to take me on you have to come to the farm,’ she says. ‘You don’t necessarily have to do anything on it – but you probably have to be there.’

With the odd bit of online dating going nowhere Christine took the plunge to apply for the show last year last year after seeing an advert.

‘Latterly it had been in my mind that I didn’t want to be on my own for ever, that I wanted someone to share my life with,’ she says. 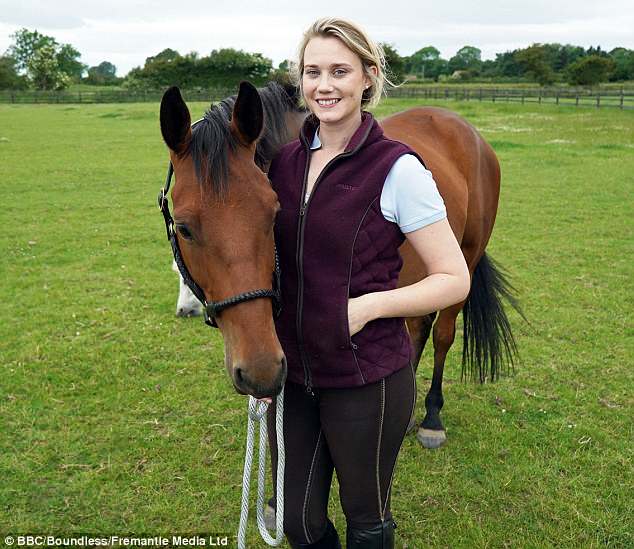 Heather, 28, (pictured) from Yorkshire received a photograph of someone’s bottom after asking potential suitors to write in to the show

‘It was another avenue to explore, there weren’t exactly men turning up on my doorstep. I didn’t think I had much to lose – I had to accept that if I wanted to meet someone I had to put myself out there – although obviously part of me thought or hoped I might get a letter from the man of my dreams.’

Not in the first instance she didn’t – although at least she didn’t get a picture of someone’s bottom in the post either, like equine vet Heather (she’s unfazed, having dated what she calls ‘rugby boys’ and admits that the sender is ‘in with a chance.’) Wendy meanwhile, is dismayed to find that her would-be suitors are both older and not as easy on the eye as she had hoped.

‘I’ve come against the problem I knew I would come up with. They are all older and me and none of them are physically attractive – and physical attraction is really important,’ she laments.

One person who does get a bulging mailbag is straight-talking Yorkshireman Peter, who receives thirty letters, among them one from a good-looking 36-year-old who has sprayed her paper with perfume and sealed her note with a lipstick kiss.

‘She’s a bit young isn’t she,’ he muses. ‘But never mind. She’d be worth having around the kitchen table – I’ll put her on the pile.’ 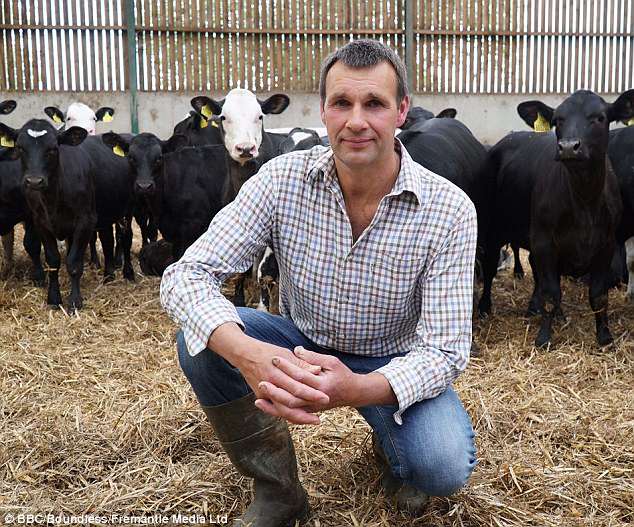 Yorkshire dairy farmer Peter, 42, (pictured) feels wedded to his land and would find it difficult to be with someone who would take him away from his farm

A divorcee who has been single for eight years, Peter is happy to admit that the farm where he was born and raised is his first love – and one that, like Christine, roots him firmly to the land he and his family have farmed for seventy years.

‘It’s always been the first love of my life,’ he says. ‘I can’t go and live a hundred miles away and still get up and milk my cows every morning – that’s why it’s hard to find somebody.’ In any case, his cows are better behaved than the women he knows. ‘Women do have their ways don’t they?’ he asks.

Peter does have a soft side though: he confesses to shedding a tear at a chick flick or two – and a wry sense of humour, confiding that he likes ‘tall single and attractive’ ladies.

‘That’s probably why I’m still single myself,’ he laughs. Ed, meanwhile, was similarly inundated with letters from pretty young women jostling for his attention. ‘I was pretty surprised by that,’ he admits now. ‘I honestly didn’t know what to expect.’

Like Peter, Ed also feels wedded to his family’s land. One of four siblings, he returned to work on the farm in the Lancashire valleys after university, the third generation to do so. ‘There’s definitely a family tie to this land and that’s very special,’ he says. As we’ve seen though, it comes at a price in terms of huge responsibilities and a curb on his free time.

Sadly Ed also battles health problems: a condition called Perthes disease affects his hips and in time he will need a hip replacement – and the combination of work and his health has meant that what he calls his ‘days of partying’ – and meeting girls – are over.

Ed applied for the show with the encouragement of his family and friends. ‘They were practically begging me to go on it although that might well be for their own entertainment’ he admits. ‘But I thought why not? I didn’t have anything to lose.’

Unlike some of his fellow contestants however, Ed admits he was keen to meet someone from a different background.

‘I wasn’t looking for an employee’ he laughs. ‘I thought it would be an opportunity to meet some really cool girls from different backgrounds – someone with their own ambition and drive. At the same time I kept an open mind. It was a case of seeing who I met and taking it from there.’

Nonetheless his three chosen candidates were expected to muck in on the farm, milking the cows and wading through mud. ‘They were all cool about it’ he says. ‘They knew what they were letting themselves in for. They were excited to try it more than anything.’

Whether or not Sara Cox will need to buy a fancy hat anytime soon he will not say however. ‘You’ll have to wait and see,’ he smiles. Either way, both he and Christine have no regrets about taking part.

‘The process in general definitely opened up my eyes,’ says Christine. ‘It showed me that you just never know who could be round the corner.’

Why your friends are disappearing from your Instagram feed

'Shameless': Steve Howey Believes Co-Star Noel Fisher Is 'One of the Best Actors in Hollywood'