Southern Charm’s Taylor Ann Green is still mourning her failed relationship with ex Shep Rose — and she’s asking for the space needed to do it right.

“Disclaimer to everyone: Shep and I are broken up. We have kept a cordial relationship but would appreciate not hearing what my ex is up to while I’m still trying to heal,” Green, 27, wrote via her Instagram Story on Tuesday, September 6. “Thanks in advance.” 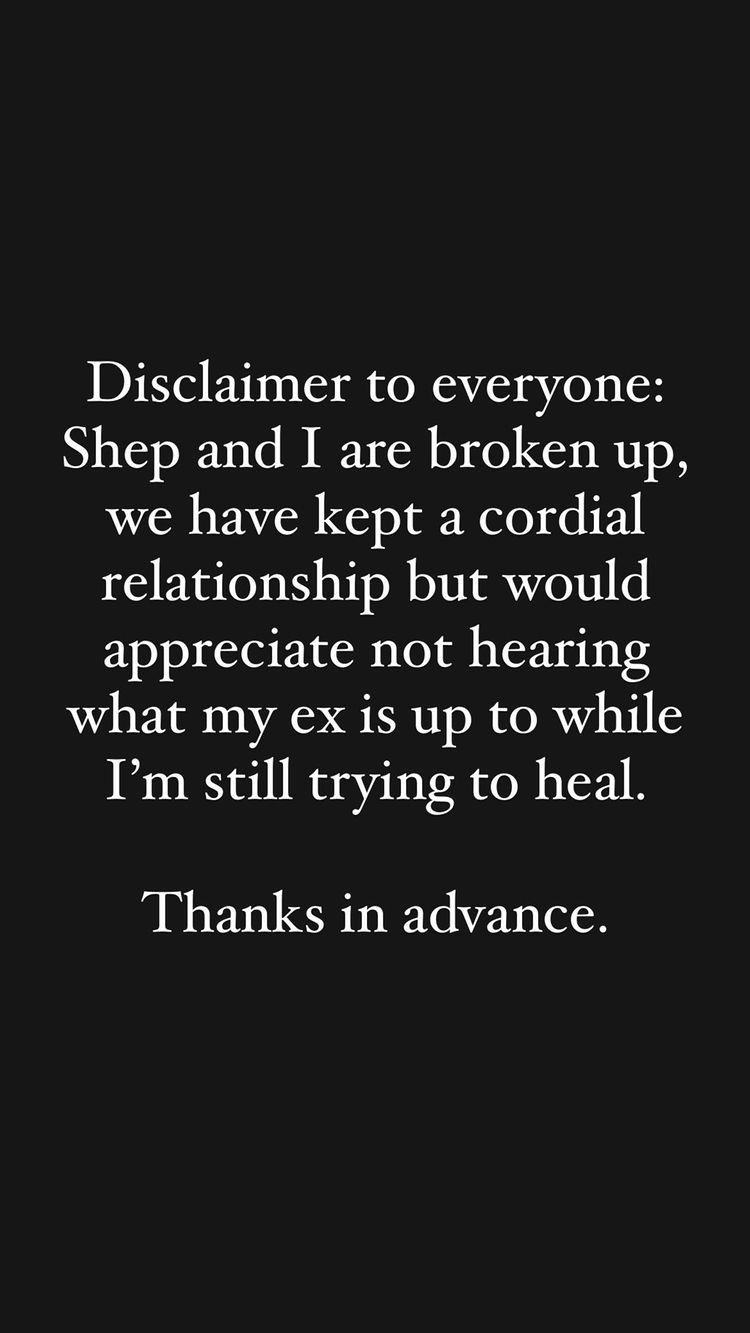 Us Weekly first confirmed in July that Green and Rose, 42, called it quits after nearly two years of dating. The following month, the clinical assistant opened up about her split from the South Carolina native.

“We are not together,” she explained during an appearance on Watch What Happens Live With Andy Cohen. Green also revealed at the time that she had been living in her “own place” prior to their split. “I would probably have to assume [he was not faithful to me].”

The Appalachian State University alum also shared that while the struggles portrayed between the couple on Southern Charm are “not the [straw] that broke the camel’s back,” everything that’s been shown “nine months later” during season 8 of the Bravo series, which premiered in June, has “proven to be true.”

Green didn’t specify what she meant by her statement at the time, but the businessman has been shown to seemingly acting cold toward his ex. During an August episode, Rose even referred to Green as a “f—king idiot” — something that caused costar Olivia Flowers to speak out.

“Don’t call your girlfriend an idiot,” Flowers, 30, told him, to which he angrily responded, “If she f—ks with my game, I’ll say it again.”

Celebrity Splits of 2022: Stars Who Broke Up This Year

Prior to their split, the duo opened up about their strong connection exclusively to Us. “Things are going well, and she’s fantastic,” Rose told Us in October 2020, before joking that Green “refuses to give me a reason not to be in love with her.”

Season 8 of the series, however, showcased the pair trying to work through the ongoing issues in their romance.

“I don’t want to have kids right now. But we don’t use protection,” the “Enough About Me” podcast host told Austen Kroll during an episode in July. “I don’t know what I want. Almost two years and I’m happy. My life is really good and she’s a big, big part of that.”

Green, meanwhile, admitted that she was ready to take the next step in their relationship. “In my perfect world, I would get married at maybe 30, 31. Starting [to have] kids by 32, 33,” she said during a July episode. “Shep’s clock might not be ticking, but mine is.”

While the former couple has been scarce with details about their split, Flowers weighed in on whether there might be a reconciliation between Rose and Green in the future.

“Taylor initiated it. But they’re both taking the space that she suggested,” she exclusively told Us last month. “[Taylor is doing] as good as can be expected. It’s one thing to go through the breakup, but it’s another to have to publicly deal with it. And I think that was kind of the shock in all of this.”