The new federal agency meant to crack down on corruption has been blasted as the “weakest watchdog” in the country after an independent analysis found it would not have enough power to investigate major scandals over the misuse of public money.

The first detailed study of the proposed agency, to be debated in Parliament within weeks, found the proposed commonwealth integrity commission would not be able to launch its own investigations, hold public hearings, issue public findings or examine breaches of ministerial standards. 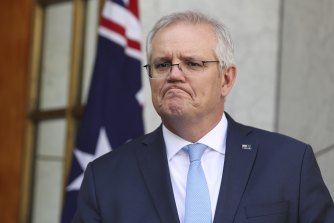 The Centre for Public Integrity, an independent group led by former judges and anti-corruption experts, also said the draft laws to create the agency block it from investigating big decisions such as the $100 million spent on sporting facilities in key seats before the last election.

“It would hide corruption, not expose it,” said Stephen Charles, QC, a former judge of the Victorian Court of Appeal and a director of the Centre for Public Integrity.

“It falls short of its state counterparts on almost every level. It is a breed of its own and does not deserve to be called a watchdog.”

Former NSW Supreme Court judge Anthony Whealy, QC, the chair of the Centre for Public Integrity, said the proposed national corruption body would be the “weakest watchdog in the country” because of the restrictions in the draft law.

“It would not be able to begin investigations into the majority of cases, as it is limited to only investigating a specific list of criminal offences,” he said.

Prime Minister Scott Morrison promised a national integrity commission before the last election but is adamant it will not have the same power as the NSW Independent Commission Against Corruption, a view shared by ministers and backbenchers.

Mr Morrison said on Tuesday there was a “real problem” with the ICAC model after the state commission announced an investigation into Gladys Berejiklian last Friday, prompting her to announce her resignation as NSW premier that day. 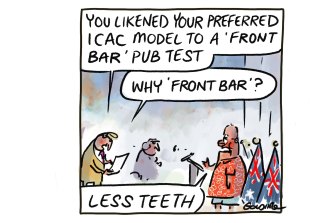 “You’ve got to have processes that assume people are innocent before thought to be guilty and that is a real problem. So it’s not a model that we’ve ever contemplated at a federal level,” he said.

“And I’m sure there are millions of people who’ve seen what’s happened to Gladys Berejiklian, they’ll understand that’s a pretty good call not to follow that model.”

Features of the NSW ICAC that are barred in the federal plan include the ability to look at any conduct that affects impartial decisions, begin investigations without threshold evidence of corruption, launch its own investigations and act on anonymous tips.

The Independent Broad-based Anti-corruption Commission in Victoria is also blocked from acting on anonymous tips but it can launch its own investigations.

Unlike the federal proposal, the NSW and Victorian commissions can hold public hearings, make findings of fact and issue public statements without waiting for a court to decide on a criminal charge of corruption.

Opposition legal affairs spokesman Mark Dreyfus said a Labor government would establish a commission with strong powers to examine “serious and systemic corruption” with scope to look at past behaviour.

While the government is yet to reveal its final plan, Section 17 of the draft bill allows the commission to look into conduct in the past as long as the listed offence was in force in the law at the time the conduct took place.

The government has argued for more than a year that future changes in criminal law should not be applied to past conduct.

The Centre for Public Integrity said the powers of the new commission would be too weak to investigate the $100 million “sports rorts” affair or the $660 million commuter car park scheme, two examples when ministers were accused of using taxpayer funds for political gain at the last election.

It also concluded the federal body would not have the scope to investigate claims in 2019 that Crown Casino was able to fast-track visas for big gambling clients visiting Australia, because conduct by third parties outside government would not be covered.

It also said the federal body would not be able to examine potential breaches of the ministerial code of conduct, such as claims in recent years that former cabinet ministers Julie Bishop and Christopher Pyne did lobbying work that flouted the rules. Both were cleared of those claims in July 2019 after a review by Martin Parkinson, the head of the Department of Prime Minister and Cabinet.

One weakness in the new federal commission, according to the new analysis, is that it would be limited to investigating criminal offences, excluding matters that involve conflicts of interest or breaches of the ministerial code but stop short of criminal behaviour.

The Centre for Public Integrity also found the threshold of evidence would be too high for investigations to start, for instance by requiring “reasonable grounds to suspect” that an offence has been committed.

One of the key arguments in the new assessment is that not all corruption is a criminal offence and that the new commission would need to be able to look at a broader range of conduct.

In line with its statements in the past, the Centre for Public Integrity said it was wrong the new body would not be able to hold public hearings and was not expected to issue public reports, meaning the public would only know of a case if it was successfully prosecuted in court.

“It would be ineffective in investigating or exposing corruption in government and the public sector, and requires urgent amendment if it is to be fit-for-purpose,” the report said.

Poor pupils are 18 months behind their classmates, report says

House of the Dragon Trailer: Brace Yourselves, Game of Throes Fans. Its Here!