At May’s federal election, as polling booths closed and votes were tallied, a trend began to emerge in suburban Melbourne and Sydney. Chinese-Australian voters were turning against the Coalition.

The Victorian-seat of Chisholm, which has more Mandarin-speakers than any other federal electorate, fell to Labor, as did the seat of Reid in Sydney, which shares similar demographics. The swing was interpreted as a backlash by Chinese-Australians to some of the more combative language used by Coalition MPs about the Australia-China relationship.

With sixth months until the state election, it spooked strategists within the Victorian Liberal Party who were worried about the lasting damage such hawkish rhetoric could do to the Coalition’s chances in November.

Of the five state electorates with the highest number of Chinese-Australians residents, four – Glen Waverley, Box Hill, Kew and Ashwood – are considered marginals that the Liberal Party must win or retain, to form government after Saturday.

The fifth, Opposition Leader Matthew Guy’s seat of Bulleen, sits within the federal electorate of Menzies where Liberal MP Keith Wolahan was elected despite a 6.3 per cent swing against him, which he attributed, in part, to Chinese-Australians rejecting his party.

In need of a relationship reset, the Victorian party has spent six months attempting to find ways to re-engage with the Chinese-Australia community and win their vote.

An advertisement for Matthew Guy, which has appeared on Chinese social media in the lead up to the election.

Eight weeks after the federal election, a letter from Opposition Leader Matthew Guy appeared on social networking platform, WeChat, on a Mandarin channel dedicated to news about Melbourne. Detailing his life story and plans for the state, the piece was read by 12,000 users.

It’s part of a border strategy by the Liberal Party which has dominated the social media platform in the lead up to the state election according to Melbourne academics Fan Yang, a PhD candidate at Deakin University, and Monash University media and communications academic, Robbie Fordyce, who are researching the way Australian businesses and politicians engage with audiences on WeChat. 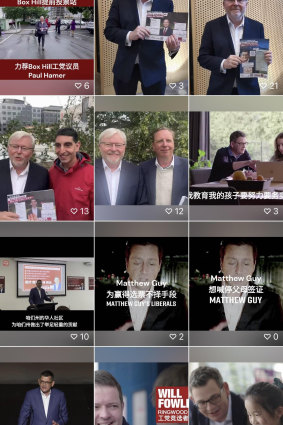 Yang and Fordyce told The Age the Liberal Party had more extensive exposure on the Chinese platform WeChat, than Labor, with more than 70 per of political advertisements assessed by the pair, coming from the opposition.

While the Coalition has dominated the social media site this campaign, Fordyce said the way the party engaged with WeChat wasn’t necessarily genuine engagement as it included lots of advertisements and promotional material.

While the state seats of Kew, which has a strong Chinese-Australia population, is under threat from an independent, Yang said candidates from the major parties still dominate the popular platform.

“The other sort of minor parties, such as the Greens or literally anything else, are basically unrepresented on the platform” she said.

Pollster and former Victorian Labor campaigner Kos Samaras said while the Chinese-Australia vote would have less of an impact at a state level, he said the way the parties had engaged with Chinese-Australians voters would be crucial to the outcome, particularly in Melbourne’s east.

He said the federal Coalition’s fight with Premier Daniel Andrews over Victoria’s Belt and Road agreement in 2018 had directly helped Labor win the seat of Box Hill.

“Labor will need the community’s support to hold seats like Box Hill, Ringwood and Ashwood after election day,” Samaras said.

Professor of Sociology at the University of Technology Sydney, Andrew Jakubowicz, agreed that Victorian Labor had built “very strong relationships with the ethnic communities” but warned the major parties against assuming the Australian-Chinese community would vote the same way, suggesting voting patterns tended to follow social class rather than cultural identity.

“When the issues are ones that concern people’s identity, they will vote with their identity,” Jakubowicz said, but added that voters were more likely to vote in ways that support their “economic interests.”

Across the state, Victorians continually raise cost of living pressures as the number one issue driving voters, a pattern that is replicated in Chinese-Australian communities visited by The Age.

Knox resident, Ping Lu, 42 said she spends approximately $100 more on her grocery bill each week due to the rising cost of inflation. The mum-of-two said she was concerned about rising interest rates, telling The Age her family would struggle to afford their mortgage once they come off their fixed rate period.

Peter Chan, a Chinese Australian who has lived in Australia for more than 30 years, raised similar concerns about the rising cost of living and interest rates, telling The Age he had to give up certain luxuries, such as tickets to see Phantom of the Opera, as his loan repayments had gone up.

He was also concerned about the rising cost of utilities, describing the situation as “ridiculous”.

Several small business owners also raised concerns about the economic support offered by the government as well as the need for initiatives to bring workers back into the office.

Kenny Zeng, the owner of two cafes at Surrey Hills and Box Hill, said state government infrastructure projects such as the level crossing removals, had a negative impact on his business during construction.

He was also critical of the lengthy work-from-home policy, suggesting there had been a 75 per cent drop in foot traffic around his business. 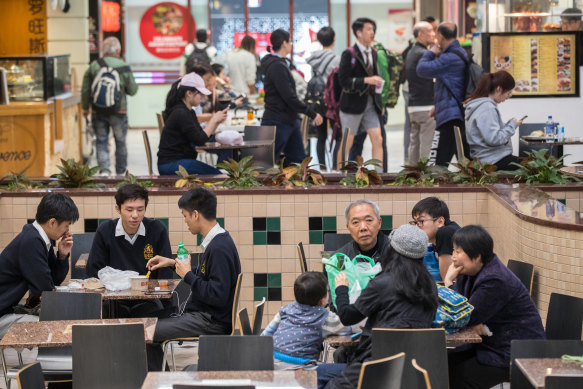 Box Hill has a huge population of Australians of Chinese heritage.Credit:Jason South

Mei Fang, a 40-year-old female, who lives in Wyndham Vale, told The Age Labor had her support.

“I think [Andrews] did very well during the pandemic,” she said.