It’s THAT dress all over again! TikTok users say their ‘minds are blown’ by viral video of woman’s hat which appears to change from green to red

Who could forget the question that divided the internet back in 2015: is this dress white and gold, or blue and black?

The two-toned frock sparked a fierce online debate, with users taking to social media to argue over what colors they could see and now one TikToker has a different garment which has left the nation scratching their heads.

Environment designer Otelia Carmen took to the social media platform and shared a video of her new hat changing color.

She explained: ‘So, I bought this green hat at the store today and I brought it home and when I took it out, I was like: ‘Why is this brown? Then realised: metamerism. This is why lighting is so important in interior design.’

Metamerism is the term used to describe the color change seen in a colored item because of different spectral emissions from varying light sources.

Why lighting should be just as important as color/material selections!! #interiordesign #learnontiktok #designertips #colortheory #shopwithme 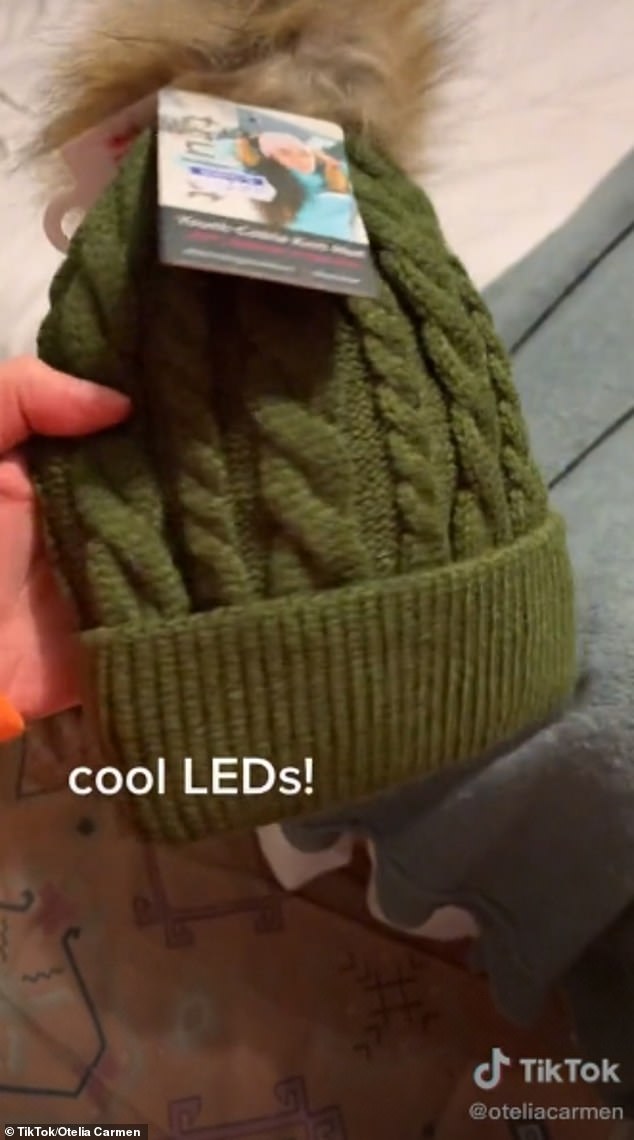 Environment designer Otelia Carmen, from the US, took to TikTok and shared a video of her new hat changing color 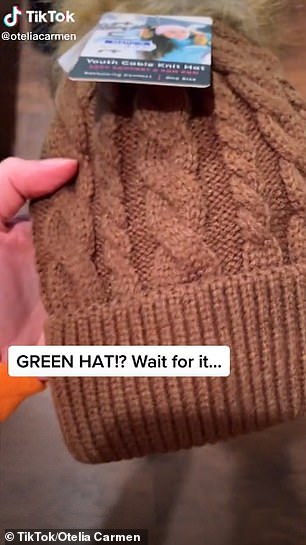 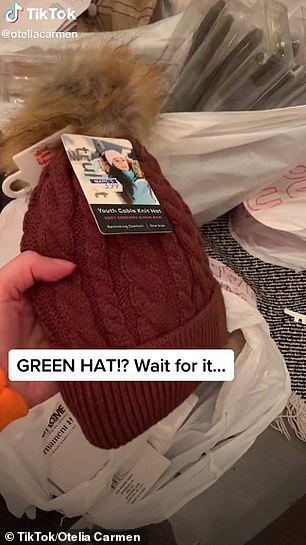 In some lights, the hat appeared a brown-red shade (left), yet in others, it look more of a  bold red (right)

Simply put, every light source has a unique ‘color’, so when this is projected onto a colored surface, it can affect the color of that surface.

This could explain why in the shop, Otelia’s hat looks green, but in the lighting in her house, it appears brown.

Many were left skeptical and requested she record herself wearing the hat around the house.

But even within her own home, the hat appears to change color from red-brown in the dining room when she arrived at the bedroom. 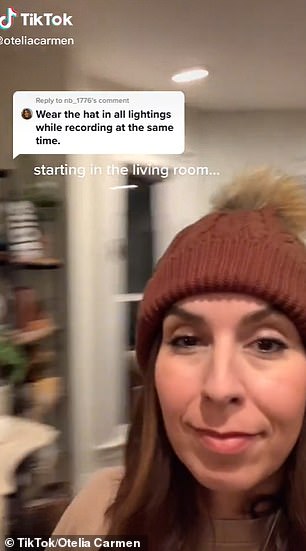 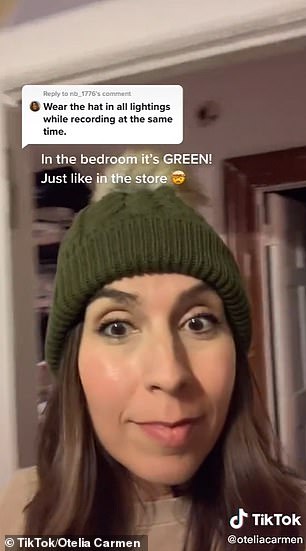 The TikTok user demonstrates how the hat starts off red in the living room, before turning green in the bedroom 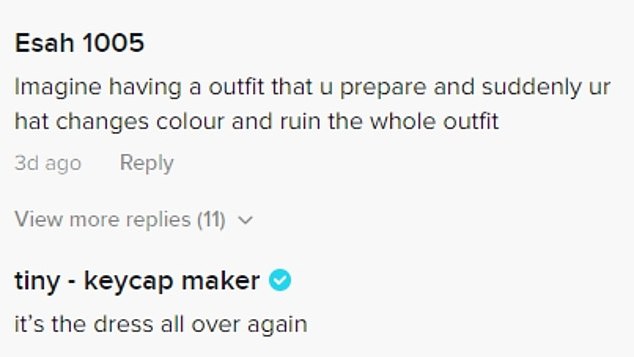 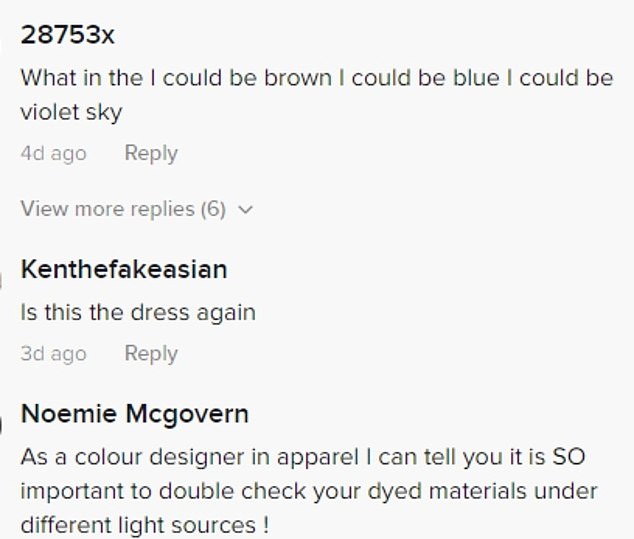 Taking to the comments section, one person joked: ‘I left this problem in 2015. I don’t have the energy anymore’

But some were still unsatisfied and accused xx of editing the video, so in one last bid to prove she wasn’t making it up, she took the hat to her parent’s house and asked them for their opinion on the color – and everyone was left baffled.

‘It’s the dress all over again,’ joked one, while a second enthused: ‘I left this problem in 2015. I don’t have the energy anymore.’

Elsewhere, a fourth added: ‘Imagine having an outfit that you prepare and suddenly your hat changes colour and ruins the whole outfit.’

REVEALING ITS TRUE COLOURS: SCIENCE BEHIND THAT DRESS

By Victoria Woollaston for MailOnline

Andrew Lotery, Professor of Ophthalmology in the Faculty of Medicine at the University of Southampton, told MailOnline that the difference in perception could be due to lighting conditions, the device the image is being viewed on and even a person’s age and gender.

He explained that everyone has different combinations of the genes that create the sense of colour for red, green and blue and because these genes are on the X chromosome, women tend to have more variations.

As a result, women have a more dynamic range of colour so may be more susceptible and sensitive to specific colours. This may explain why women flip between seeing the different colours, and men typically don’t. 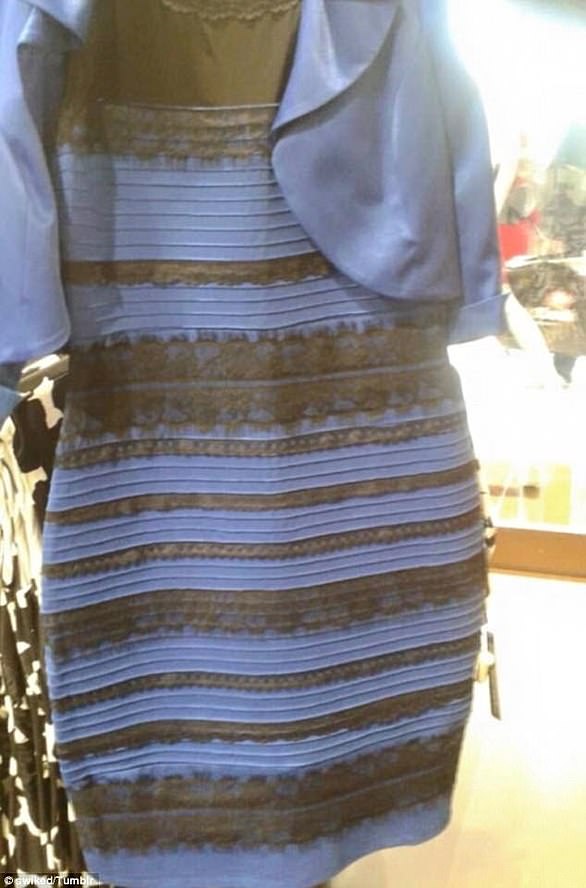 This two-toned frock sparked a fierce online debate, with users taking to social media to argue over what colors they could see

He added that some people have more than one ‘dose’ of a blue colour gene, as an example, so they will see higher or lower levels of this colour, too.

Additionally, as people get older their perception of colour changes.

The lens of the eye gradually yellows with age and this exposes more blue, continued Professor Lotery.

This will influence how deep or strong a colour appears and could explain why older people may see the blues and blacks rather than the whites and golds.

He gave the example that painters such as Monet and Rembrandt painted scenes when they were younger that were predominantly one colour, but the same scenes featured more red when painted later in life.

Elsewhere, Professor Lotery said: ‘The occipital lobe is responsible for actually processing the vision and there may be an element of optical illusion to [the photo of the dress].’

Many work by contrasting images and colours, and this contrast could explain the differences seen on the dress.

‘It’s quite a striking contrast between the black and the blue’ continued Professor Lotery.

‘For example, it could be that if the lighting conditions slightly changed, the person viewing the image is getting more stimulus on the blue photo receptor, for example, than the red.

‘On the balance of stimulating one a subtle change in angle could make it flip. This includes the type of room, the monitor, the lighting and so on.

Plus, if your brain is focusing specifically on the differences your vision may be on the cusp of colour recognition and this could cause the differences.’

Other conditions, such as the development of cataracts, changes the way people see the colour blue, and that could play a role too.

Flog It! axed by BBC after 17 years

Ellen DeGeneres Opens Up About 'Excruciating Back Pain' After COVID-19 Diagnosis: It's 'Bad'