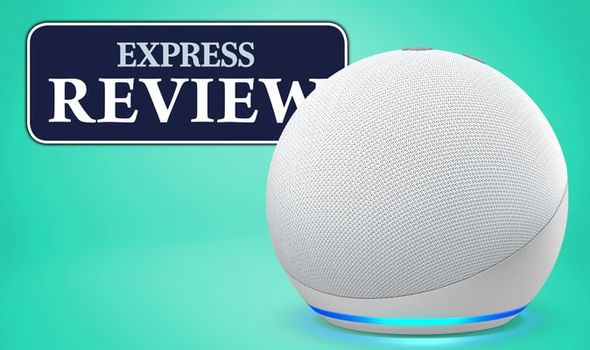 Just like the bigger Echo, Amazon has also redesigned its smaller, more affordable Echo Dot. It has the same spherical design and new colour options.

Unfortunately, the redesign hasn’t brought any new capabilities to the Echo Dot, unlike the pricier Amazon Echo, which gained a built-in Zigbee smart hub to make pairing dozens of smart gadgets – from light bulbs to plugs – much less of a hassle.

Amazon also used the extra real estate inside the round design to squeeze in more components to improve the sound quality. Although the fourth-generation Echo Dot occupies a slightly larger space than its predecessor, thanks to the ball-like shape, Amazon hasn’t listed any specific improvements to the audio components this time around.

So, with all that… is worth upgrading to the new Echo Dot? Express.co.uk has spent the last couple of weeks with the fourth-generation Amazon Echo Dot, here are our in-depth thoughts on the latest generation of smart speaker…

The latest Amazon Echo Dot is available to buy right now. In fact, Amazon has slashed the price as part of its Black Friday deals, so there’s never been a better time to buy it.

As always when buying through Amazon, Prime members will be able to take delivery of the new smart speaker on the next day at no extra cost. Amazon sells the fourth-generation Echo in a Charcoal, Glacier White, and Twilight Blue finish.

It’s worth noting that “Charcoal” is pretty similar to the colour of the same name included with the previous generation of Amazon Echo – so if you’re looking to match your new Amazon Echo with any existing Alexa-powered gadgets in your collection, that’s the one to opt for. Unfortunately, most of the other colours used in the Echo range with the last refresh, including Red, Heather Grey, Oak, Sandstone, Silver and more, don’t make a reappearance this time around.

Priced at £49.99, the new Echo Dot is slightly pricey than the third-generation model, which is still available to buy from Amazon at £39.99 for those who don’t like the round form-factor or want to save a little money. In the Black Friday sales, Amazon has dropped the price of the fourth-generation Echo Dot down to £28.99 for a limited time.

As such, you might want to add one of these to your basket sooner rather than later if you want it guaranteed beneath the tree. 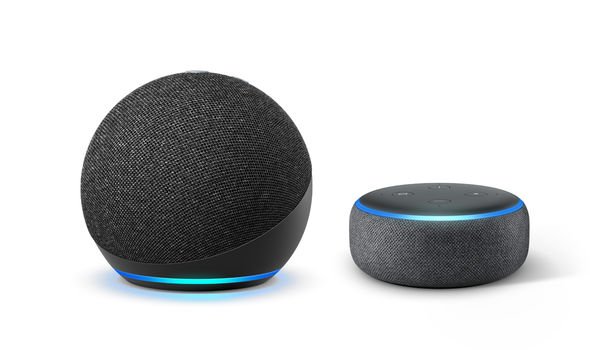 After a few years of subtle refinement, Amazon has completely overhauled the design of its diddy Echo Dot for the fourth-generation. Gone is the beef burger-esque design used for the previous three generations of Echo, replaced with a new spherical shape.

As we mentioned in our review of the full-sized Amazon Echo, there’s something very charming about the new rounded shape. But while it looks good on the Echo, for our money, the smaller Echo Dot wears the new design even better. There’s something about the smaller frame that makes the small ball shape look incredibly cute. It also helps the Echo Dot skirt around one of our problems with the full-size Echo. The spherical shape means the new Echo occupies slightly more space than its Pringles tube-like predecessor. This is still the case with the Echo Dot, but since both are pretty diddy, it’s not as pronounced.

If you’ve already got an Echo Dot on a bookshelf or squeezed between cooking appliances in your kitchen then, chances are, the new ball-shaped Echo Dot will fit in the same spot. Unfortunately, the same cannot be said of the new Echo. 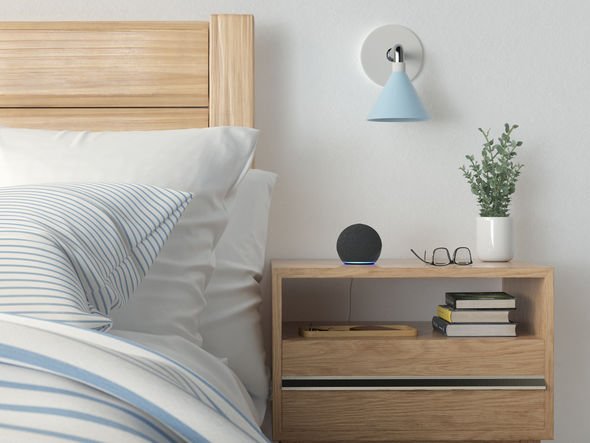 Despite the new shape, Amazon hasn’t added more components to improve the audio – something it did manage to do with the full-size Echo. That said, the sound quality from the Echo Dot is pretty solid. That’s something that definitely wasn’t the case when Amazon introduced the Echo Dot range.

Listening to playlists on Apple Music, live radio, podcasts and audiobooks all sound great on the small Echo Dot. Sure, you’re not going to want to DJ your next houseparty using the pocket-sized smart speaker… but for everyday listening, it’s absolutely fine.

If you’re looking for something with a bit more of a punch, the new-and-improved Amazon Echo has noticeably more bass. And if you’re looking to DJ a houseparty sometime soon (pandemic dependent, naturally) we’d recommend something like the Sonos One, which includes smarts from Alexa and a much beefier sound. 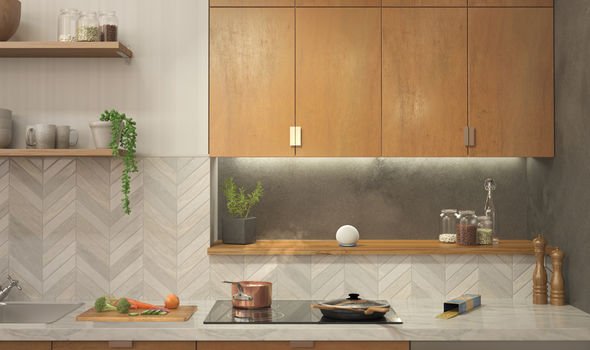 While it looks markedly different from the outside, on the inside, the Echo Dot is still an Echo. That means it’s still great at handling all the smart speaker stuff we’ve come to rely on these smart home gadgets to do for us – from reading out the latest news and weather reports, prompting us with reminders, finding answers to any general knowledge queries that pop into our head, order our Saturday night takeaways, control playback on Fire TV streaming dongles around the home, adjusting smart light bulbs and security cameras.

If you’ve never owned a smart speaker before – trust us, it’s great.

Playing favourite albums, finding out when a new movie will be playing at your local cinema, setting timers while cooking, turning on the lights, and checking the closing time of your local supermarket all works phenomenally well with Alexa. It also saves you constantly reaching into your pocket to pull out your smartphone.

There are thousands of extra apps, which Amazon calls “Skills”, for the talkative voice assistant, but there’s are often less useful. Some are comically niche, like one that enables Alexa to play cat sounds, while others will require you to fit your requests into a pre-set formula. For example, the Roomba robot vacuum cleaner Skill requires you to say “Alexa, ask Roomba to start vacuuming” or “Alexa, ask Roomba to stop vacuuming”, rather than “Alexa, start my Roomba” which would be a more natural turn of phrase.

While the fourth-generation Echo has a Zigbee hub built-in to handle setting up smart home devices, the Echo Dot doesn’t pack in these components. For those hoping to use their Echo purchase as a jumping-off point to add a truckload of smart home gadgetry, like Philips Hue bulbs, smart thermostats and voice-controlled plugs, it might be worth saving a little longer and plumping for the full-sized Echo.

If you’re not too fussed and just fancy the convenience of a voice assistant in the kitchen to handle timers, recipes and radio… the Echo Dot is more than smart enough for that. 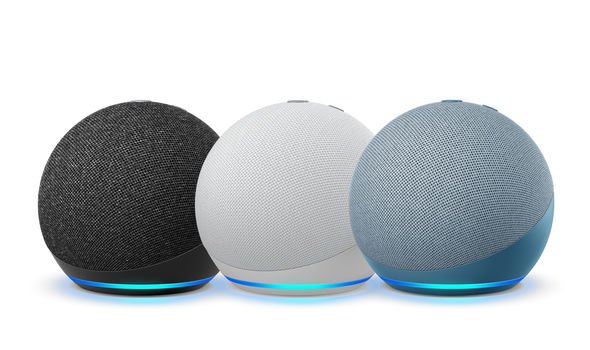 Unlike the fourth-generation Amazon Echo, which brings a number of tricks from pricey Alexa gadgets to the smart speaker that most people should buy… the new Echo Dot only benefits from a fresh lick of paint. But while there’s not much new under the bonnet, the Echo Dot is still an incredibly compelling smart home gadget.

The new spherical design looks incredible on the Echo Dot. The diminutive speaker wears the tennis ball look much better than its pricier sibling. For our money, this stands toe-to-toe with the Apple HomePod Mini in terms of design and wipes the floor with the Google Nest Mini.

With the latest design, Amazon has dramatically boosted the environmental credentials of the best-selling smart speaker. Half of the plastic used in the new Echo Dot is recycled, while 100 percent of the fabric and aluminium used in the product is recycled. Not only that, but Amazon has created a new low power mode as well as new wind and solar farms to produce clean energy equivalent to the electricity used by this device throughout its lifetime.

If you like the new design and need another reason to upgrade from an early version of the Echo Dot, the green credentials of the new gadget are a compelling bonus of the latest hardware.

With any luck, Amazon will bring back some of the flashier colours found on earlier entries, but that’s a small nitpick. Alexa remains one of the most personable AI assistants on the market. While it can’t always match Google Assistant’s infallible knowledge, it comes close. And it has all of the charm and personality of Apple’s Siri. Amazon is quietly adding new features all the time, from topical jokes to genuinely new tricks like the burglar alert system recently rolled-out in the US, so the Amazon Echo is sure to only get better as time goes on.

If you don’t need the full-throated audio of the full-sized Echo, the smaller Echo Dot is a great little smart home device that will look great in every room.

Wow, Cult Gaia's Spring 2021 Collection Just Made Us So Excited for Summer