If Fortnite-maker Epic Games' Australian legal challenge against Apple is successful, the tech giant may be forced to loosen its grip on its valuable mobile app ecosystem, with Epic arguing that competition law obliges Apple to allow rival stores and payment processing mechanisms on its devices.

Currently, the Apple-controlled App Store is the only way to get apps to consumers on iPhones, which make up more than half of all in-use smartphones in Australia. And all payments for digital goods, in-app purchases and subscriptions must use Apple's payment mechanism, from which, in most cases, Apple takes a 30 per cent commission. 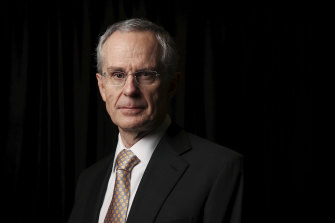 Australian Competition and Consumer Commission chair Rod Sims said the Epic case was a well-timed test of the current competition laws, which were recently revised to better prevent misuses of market power

"Apple, as one of the two main app stores, is in a very strong position. It would seem like they have quite a lot of market power and can set the terms and conditions under which various apps operate," Sims said.

"When you've got market power, the key questions that arise are what are the boundaries of that power, in which market does that power exist, and where else can we have competition?"

Apple will likely be arguing that within the broad market for apps, it doesn't exert significant power. There are competing app stores that people can use, for example on Android devices, and, within Apple's App store, there are a vast number of options that compete with Apple's own offerings.

Epic's argument will be that "app stores on iOS" and "payment processing mechanisms on iOS" should be regarded as discrete markets on their own – markets where Apple does not allow competition – because app developers and sellers of digital goods have essentially no option but to be on iOS if they want to reach customers.

Mr Sims said the ACCC would be following the case very closely, and said it may be particularly interesting since it was a private filing.

"The court will be faced with two well-armed private players. Often it's hard to get evidence before the court on these things, but Epic is big enough and has the evidence to do that," he said.

"The key issue Epic is raising is: just because you've got market power in being the host of these app stores, should you also be able to insist that people can only pay through your payment mechanism whereby Apple gets 30 per cent, rather than being able to pay through other payment mechanisms which, if there's competition, would be much lower than 30 per cent."

The ACCC is preparing a report on the app marketplace, with a focus on the market power of Apple and Google, due by the end of March. In a submission to the ACCC, Apple argued that its app ecosystem is an open one that enables and encourages competition. It pointed out various rivals to its own app offerings available on the store — Chrome and Edge versus Safari for example — and said money from services made up less than 23 per cent of Apple's overall global revenue.

It said the App Store's primary purpose was to add value to its devices, sales of which still make up the bulk of revenue, and so its practices were informed by what made for the best consumer experience rather than what made most money.

Yet Apple has been keen to demonstrate the growth in its services revenue in recent years, as analysts have pointed to the area as vital amid slowing growth for the company's device sales. In fact, in 2017 chief executive Tim Cook promised to double services revenue by 2020.

Apple doesn't break out the figure it earns from commissions on App Store purchases — as opposed to money from Apple Music or iCloud for example — but you can get a rough estimate from its disclosures. At the start of this year Apple said it had paid $US155 billion ($212 billion) to developers since 2008, and in 2019 it disclosed a figure of $US120 billion. That's $US35 billion paid to developers in 2019, and if we assume that figure is 70 per cent of the total sales, that's $US15 billion to Apple in commissions for the year.

Apple has faced pressure from many companies, lobby groups and regulators over its App Store fees and rules.

In its submission to the ACCC, Microsoft said Apple's rules were applied unevenly to favour its interests. For example, Netflix and other video streaming apps are allowed to give users access to videos not vetted by Apple or found on Apple's store, in contrast to the rules on game streaming (Google, Microsoft and NVIDIA have all had game streaming apps blocked on iPhone). Microsoft points to research showing that more than two thirds of App Store spend was in video games.

In another submission, Nine Entertainment Co (publisher of this masthead) said Apple's commission had a large impact on its ability to make money from news subscriptions on mobile, and that offering subscriptions through its Stan video streaming app wasn't commercially viable.

Earlier this week Apple announced it was dropping its commission to 15 per cent for any small business or independent developer making less than $US1 million ($1.4 million) per year on the app store. But Epic Games founder and chief executive Tim Sweeney was not satisfied.

"This would be something to celebrate were it not a calculated move by Apple to divide app creators and preserve their monopoly on stores and payments, again breaking the promise of treating all developers equally," he said.

"Apple is hoping to remove enough critics that they can get away with their blockade on competition. But consumers will still pay inflated prices."

An Apple spokesperson said its small business program was an investment in the long-term health of a critical part of its developer ecosystem, and not a response to any litigation or potential regulation.

Sims said the ACCC had an open mind as to whether any potential issues could be dealt with using competition law, consumer law or the imposition of regulations.

"I know people often don't like regulation, but all markets around the world depend on it," he said.

"We need to have an open mind as to how best to bring about the app marketplace which is going to most benefit the economy. Now’s the time to be asking those questions and addressing them."

What is a bomb cyclone? Huge winter storm to hit 200 MILLION in US – latest warnings