Home » Technology » Could robots be coming to the places that grow your food?

“As an employer I don’t like to say this, but it’s true: the one bit of running a business that is really getting me down is employing people,” he says. “I’ve employed people for over 30 years, and I’ve always loved it, but I’m probably not just enjoying it as much as I did.”

After years of COVID-induced border closures that crippled farmers’ typical backpacker workforce, Boardman still has a long list of issues. A tight labour market makes it hard to find staff, backpackers prefer coastal towns with surf to the inland, workers take weeks to train but often leave just as quickly or take days off without notice and the dearth of accommodation in regional centres means some just can’t stay in the area.

Before the Jobs Summit at the start of September, farmers were warning that food was being left to rot in the field because of labour shortages. By the end of the summit, their peak lobby group, the National Farmers Federation, said there had only been “incremental” gains.

So farmers like Boardman are willing to give robots a try.

If all goes to plan, a robot from an Australian start-up called Lyro Robotics will join the workers in Boardman’s packing shed and deftly pick up avocados from a conveyor belt with its rubbery suction “hand” and place them gently in trays bound for supermarket shelves.

The opportunity for automating agriculture is enormous. A 2020 report by the consultancy McKinsey & Company found autonomous farm machinery could add up to $60 billion to global GDP by the end of the decade. 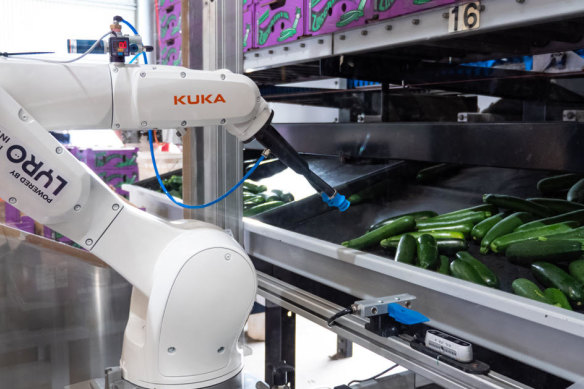 A Lyro robot at work on a zucchini farm.

But though farms are increasingly using technology for things like monitoring livestock, soil and plant conditions, actual automation is in its infancy. At a farm like Boardman’s there is nothing much more mechanised than a ute, tractor or conveyor belt. The crucial stages: planting trees, picking fruit and putting it in a tray, are done by hand.

The reason is known as Moravec’s paradox. Machines are wonderful at doing things humans struggle at, like quantum physics, but struggle with basic physical actions that people find simple.

“It seems like one of the most intuitive things that humans do, you take a person to an orchard, and they just pick an apple,” says Leopold Lucas, co-founder of another start-up called Ripe Robotics that is working on a machine to do just that. 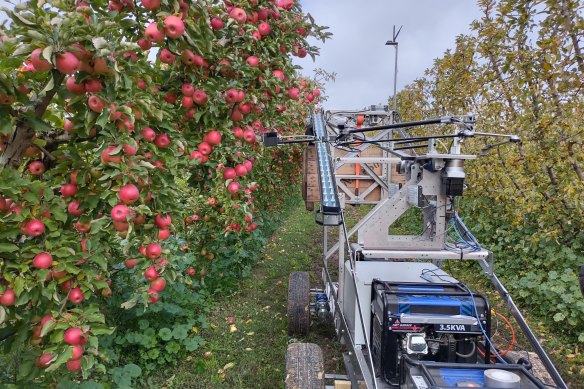 A Ripe Robotics machine in testing at an apple orchard. Every test run gathers data that improves the machine’s algorithms.

For a robot, the challenges are manifold. Unlike in a warehouse, where automation is becoming common, there are no smooth surfaces for a robot to trundle along in an orchard. There are no street maps to follow. No two apples look exactly alike and no two trees grow the same. It means that every time a robot goes to pick an apple, it has to be smart enough to analyse the whole tree and understand what it is reaching for and how to get there without getting snagged in a branch. Then Eve, Ripe’s current test robot named for the Biblical picker of forbidden fruit, has to apply just enough pressure to get the fruit off the tree without leaving even the barest mark that can lead supermarkets to cut its price by 90 per cent. And that’s before accounting for the weather.

“You have to do it out in the field, where there could be wind, rain, snow, 40-degree heat. It gets difficult, very dusty,” Lucas says. “There are difficulties in identifying the fruit and assessing how ripe it is, especially in different lighting conditions.”

After all, a major selling point for robots is that they can work in conditions where humans cannot, like in the dark, and for more hours than people who need food, drink, rest and toilet breaks. There could be benefits too in tracing the provenance of food and analysing its quality, but that all means robots must have the durability and power supplies necessary to last the distance.

Conditions are not as complex in a packing shed but the basic challenge of rapidly gripping and moving unevenly shaped fruit remain.

Lyro co-founder Dr Nicole Robinson, who has a background in robotics at the Queensland University of Technology, says there is a scale of difficulty. Regular, largely spherical fruits like apples are among the easiest for a machine to grasp. Sweet potatoes, which come in a range of sizes and twists, are in the middle. Small and finicky berries are some of the hardest. 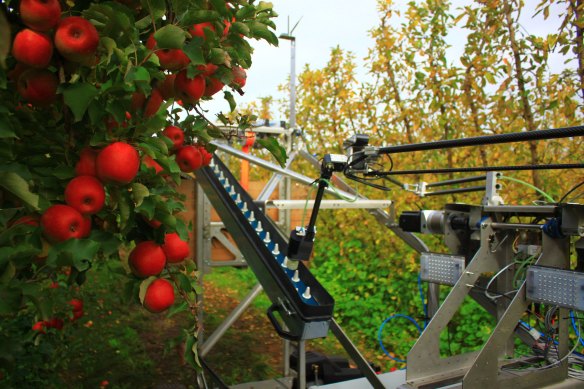 Ripe has tried different types of gripping mechanisms to pluck apples from a tree. A vacuum tube turned out to need too much power. Now a gripping hand uses compressed air to suck the apples off the trees.

But there have been a host of innovations in recent years that make the challenge surmountable. Computer chips have become much faster and more efficient, letting robots do more complex tasks. Vision systems, which let them identify items, have improved dramatically. Rural internet is quicker and more reliable. And even some farming practices – like planting apple trees on trellises that make orchards easier for machines to navigate – are helping too.

Robinson says the combination of advancing technology with a major problem to solve is what drew her to the sector. “There is a huge amount of food wastage that occurs if you can’t pick and pack the fruit on time. You know, millions of tonnes just going to waste per year.”

Food loss at farms has an array of causes: diseases, market prices and the weather among them, as well as insufficient labour, but Robinson is right about its cost. One 2015 report from a government-industry-academia research centre put it at almost $3 billion a year in Australia alone.

There is also, Lyro’s general manager Mark Adams says, opportunity to move workers from the hard, dull and repetitive tasks on farms to higher skilled and better-paid jobs. That could mean things like analysing produce, overseeing machines and performing skilled maintenance. Boardman hopes it will go that way too.

There are plenty of roles in the former category.

It is someone’s job to put a dab of hot glue on each of the thousands of pineapples that come down a conveyor belt for eight or 10 hours a day and someone else’s job to apply a sticker, Adams says. It is someone’s job to put, say, 42 peaches in each tray: no more, no less. Someone must cut every cabbage, bent over in the heat or cold. Labourers and machinery operators, common on farms, have some of the highest rates of serious workplace injuries of any profession, Safe Work Australia statistics show.

And at unscrupulous farms, underpayment is rife. In 2018, audits by the Fair Work Ombudsman found more than 200 firms in the industry breaking pay laws; when it checked again in 2020, only one in five had fixed their problems.

But there are upsides to farm work too. It helps sustain regional centres that, at least before the pandemic, were struggling with population loss. And governments from both sides of politics have championed the deals Australia has with Pacific Islands nations to give visas to farmworkers, arguing they provide workers with skills, cash to send home to family and are a way of deepening ties in the region at a time when competition for influence with China is fierce. 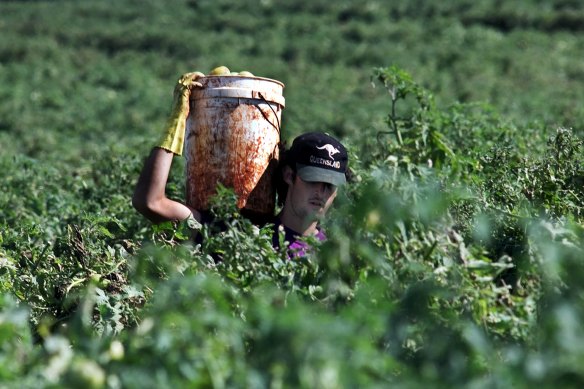 Farm work can be gruelling, repetitive and done in harsh conditions.Credit:AP

The United Workers Union, which represents horticultural workers, declined to make an official available for interview.

Even if Adams is right and farmworkers become more skilled, it appears likely that automation will mean there are fewer in future, at least of the seasonal workers. The economics works no other way.

For now, Lyro and Ripe are small firms, with the former’s last raise totalling about $1.5 million in capital and grants while the latter has obtained about $1.2 million in major raises and equity.

Both plan to raise more money from investors to keep developing their robots, despite the difficult conditions for start-up capital raising, with Lyro estimating it will have to spend a few million more to get to a major commercial scale to lease out to farmers at a planned cost of about $7000 to $8000 a month. That model means they can move them around from farm to farm as different crops come into season.

Ripe is doing trials this year in deals with farmers where it is trying to match human costs of about $60 per bin of apples picked. Once it proves its concept by picking a full bin, Lucas says Ripe is hoping to raise $3 million to $5 million to hire staff and grow its fleet of robots.

Boardman, the avocado farmer, says he will only use robots at scale when they are as fast as a human and comparable on price.

"I think we'll find it'll take some time to get robots up to the speed of a human," Boardman says. "What the human body is able to do is amazing really, compared to what robots can still do."