On Thursday the world will get its hands on the result of his studio’s blood, sweat and tears for the past three years: the video game Cult of The Lamb.

At least 60,000 people are awaiting the game’s release on the video game platform Steam, and it’s among the top-selling games on the platform before it has even been released. Wilton admits he’s feeling a little bit of pressure.

“I really hope there’s no bugs,” he laughs. 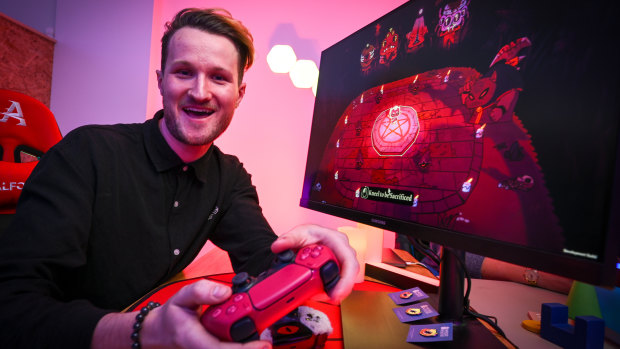 Julian Wilton, Melbourne-based creative director of Massive Monster – the three-person development studio behind the game Cult of the Lamb.Credit:Eddie Jim

Cult of the Lamb is described as a mash-up between a “base builder” game and a “dungeon crawler game” – like if you scrambled Nintendo’s cosy-vibed Animal Crossing with the horror-themed The Binding of Isaac.

“Basically, you play as a little lamb character and you go and start a cult of other little animals,” says Wilton.

“You go out, find followers and bring them back to your base. Then you need to look after them – give them food, keep them happy. But then if they’re naughty, you can sacrifice them to some dark gods.”

Australia might not spring to top of mind when thinking about the world’s biggest video games – let alone Melbourne.

But more than half of the country’s game development companies are based in Victoria, as well as 57 per cent of the workforce.

Wilton’s game was among six games backed by Victorian agency VicScreen previewed to the media that are set to launch in the next 12 months either on mobile, PC, or Xbox and Playstation. 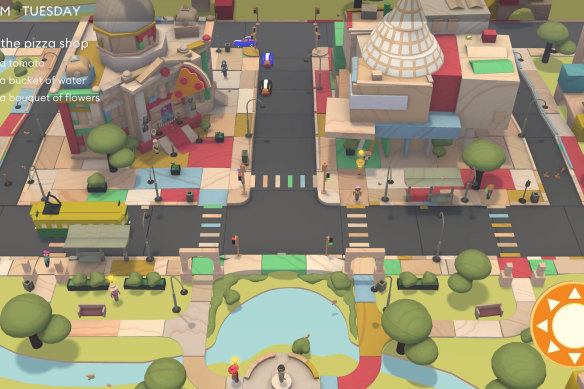 Many of Melbourne’s most anticipated games previewed on Wednesday are left-of-field, exploratory games that aren’t necessarily pitched at typical male video gamers.

Future Folklore, set for concept release next year, will be Australia’s first ever Indigenous-led mobile game, set in a fantasy world inspired by the Australian bush where players can explore and care for Country.

A Silicon Valley venture capital firm has just pumped $9.76 million into a Melbourne mobile-based app called Kinder World by female-led Melbourne studio Lumi Interactive. Dreamt up during the dark days of COVID lockdowns, the cosy game is all about tending to virtual houseplants and spreading kindness to help people unwind.

Climate change and environmental themes are explored in Onepixel.com’s Studio Ghibli-like game Way to the Woods as well as Paper House studio’s Wood & Weather, which depicts a “toy world” undergoing the impacts of climate change.

Melbourne outfit Ghost Pattern also previewed Wayward Strand, a game set in the 1970s that explores the world of 14-year-old Casey, who tags along on summer holidays to her mum’s job at an aged care hospital in regional Victoria (which is also suspended in the sky).

Wednesday also marked the official opening of applications for the next round of Victoria’s Games Development Internship program, which aims to foster more game creators from traditionally underrepresented backgrounds in the screen industry.

The game, created by Fitzroy-based studio House House, was recently acquired by ACMI in Melbourne, the Powerhouse in Sydney and the National Film and Sound Archive in Canberra, which are preserving the game and its early drafts for posterity.

VicScreen chief executive Caroline Pitcher said the Victorian digital games industry had just had a record year, with VicScreen-supported games injecting $9.7 million into the state economy – a 46 per cent increase on the previous year.

“The digital games industry is growing exponentially, and we are championing that by backing local IP and career development,” she said.

Nasa's Mars helicopter sends back video from its furthest flight