Home » Technology » Opportunity: The little Mars rover that could

The tributes, poignant cartoons, emotional tweets and even love songs keep pouring in. I'm feeling surprisingly sad as well. I covered the building and launch of Opportunity, and its twin rover Spirit, for the Los Angeles Times 15 years ago, and I feel like I've lost a close friend.

It's always very hard to get a spacecraft to Mars, and in 2003, NASA was reeling from a series of high-profile failures. As the rovers were being built, the space shuttle Columbia crashed, killing seven astronauts – and placing even more pressure on the $800-million rover mission to succeed. 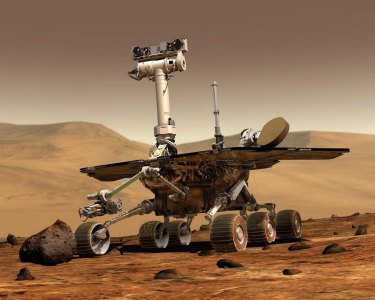 It was incredible to see the care engineers took as they hand-crafted Opportunity and Spirit, wearing surgical gear in clean rooms as they attached cables and tested wheels, careful not to let a stray eyelash or even a flake of dandruff fall onto the delicate components. Test versions of the rovers, like toddlers, explored sandboxes.

While the rovers were being finished, dozens of planetary scientists argued heatedly over where the rovers should land – the geologically interesting places scientists wanted to explore, with their deep canyons and giant rocks, or the safer, flatter places the landing engineers favoured. They finally settled on Meridiani Planum as a landing spot for Opportunity, a flat plain with lots of intriguing crystals that might have formed in water.

Opportunity's launch, in July 2003 after three years of construction and a delicate trip to Cape Canaveral, was fraught. But it went off without a hitch.

It was during the landing when scientists and engineers really got nervous. Their plan was for the rovers to streak through the Martian atmosphere at more than 19,000km/h, use their heat shields to slow down, deploy parachutes and then bounce down onto the to surface of Mars protected only by giant airbags. It seemed like something an imaginative third-grader might invent.

Scientists referred to the landing as "six minutes of terror". It seemed impossible to me that the rovers could survive. But they did. When they landed, grown men and women in the control room cried.

Not only did the rovers survive, they lasted far longer than even the most optimistic engineers had predicted. Spirit's last communication arrived from Mars in 2010, after it got caught in a sand trap and froze. It was only built to last 90 days, but lasted six years. Opportunity, astonishingly, lasted 15 years, succumbing only after a planet-wide dust storm likely covered its solar panels or gummed up its electronics.

Both robot geologists thrilled scientists by finding evidence that Mars was indeed warmer and wetter in the past and may have supported the conditions necessary for microbial life to exist. Finally, it was Opportunity that kept going and going, traveling 45 kilometres across the rough, dusty surface of Mars despite a baulky wheel and sending back gorgeous photos to the end.

It's sad to lose the rover. But we can still focus on what Opportunity represented. The rover, not human in the least, nevertheless embodied the best of humanity: people working together, taking audacious chances, exploring and never giving up. Rest well, little rover. You've earned it.

Robin Williams Quit Drugs After John Belushi’s Death: 'Cocaine for Me Was a Place to Hide'

How Much Do Prince Charles and Camilla Parker Spend on Travel?