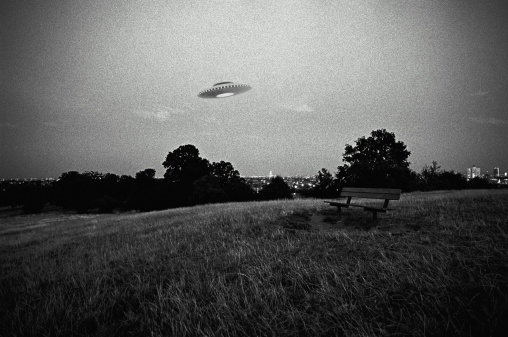 Scientists in Ukraine believe they’ve spotted a number of UFOs, according to a new preprint research paper.

The paper published in coordination with the country’s National Academy of Science (NAS) and Kyiv’s Main Astronomical Observatory details sightings of unknown objects in the sky.

The study’s authors refer to Nasa’s commissioned teams to study Unidentified Ariel Phenomenon (UAPs) and say that theirs was an independent study.

Titled ‘Unidentified aerial phenomena I. Observations of events’, the paper describes findings made at NAS’ Main Astronomical Observatory in Kyiv and a village south of Kyiv called Vinarivka.

‘We see them everywhere,’ said the researchers. ‘We observe a significant number of objects whose nature is not clear,’

The researchers said that the observations were performed with colour video cameras in the daytime sky.

Depending on how they appeared, the UAPs were classified into two types: the luminous ones were called Cosmics and darker ones were called Phantoms. The astronomers also said that they had named the objects after birds like swift,
falcon, eagle etc.

‘Flights of single, group and squadrons of the ships were detected, moving at speeds from 3 to 15 degrees per second,’ said the paper.

The objects were spotted at an altitude of 1170 km, flashing for ‘one hundredth of a second at an average of 20 Hz’.

The paper didn’t elaborate on what the objects were, just that they moved at great speeds.

‘Phantoms are observed in the troposphere at distances up to 10 – 12 km. We estimate their size from 3 to 12 meters and speeds up to 15 km/s,’ said the researchers.

Given that there is an ongoing war in the area, it’s entirely possible that these objects could be missiles or rockets but the paper says that their nature ‘is not clear’.

The topic of UFOs has gained popularity since the US Pentagon revealed videos and photos of unidentified aerial objects in the first hearing about UFOs in over 50 years.

The Pentagon has long speculated that some UFOs could be advanced technology from foreign militaries like China and Russia. This year they even set up a new UFO hunting agency called the ‘All-domain Anomaly Resolution Office’ (AARO) to ‘detect, identify and attribute objects of interest… and, as necessary, to mitigate any associated threats to safety of operations and national security.’

Mum, 53, claims hidden brain tumour grew to 'the size of an orange' after five rounds of IVF