Home » Technology » Taken for a ride: A tale of two share-bike cities

Inexplicably to many Sydneysiders, share bikes are back. Six operators are in the city. You could take an Airbike, Lime, Neuron, Beam, HelloRide or Bird to your coffee meeting. A seventh – Helbiz – is eyeing the market, should you need even more variety.

It is enough to bring up memories of dumped bikes, blocked footpaths and polluted rivers. And all this while Mobike, one of the first generation of share-bike operators that cemented the industry’s poor reputation, collapses. 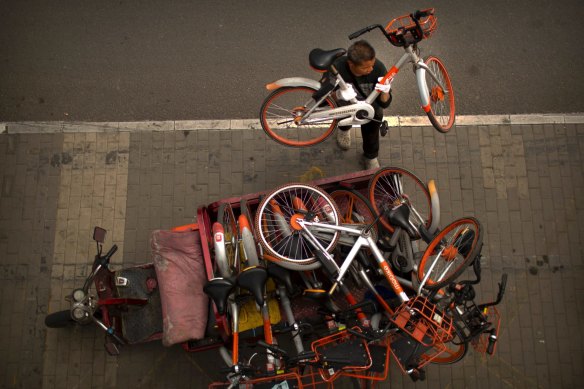 Mobike rocketed out of China but failed last year in Australia even after it was taken over by new investors.Credit:AP

How did it come to this? And why are things so different in Melbourne?

Some economic truths, some government inertia and a decade of easy money.

On paper, shared bikes are a great idea. People get where they’re going quickly and greenhouse gas emissions are minimal. Car trips might even be saved or public transport use increased if people can get to a station from further than they’d be happy to walk.

And wouldn’t it be more convenient if there was a bike ready and waiting rather than having to bring your own?

The first generation of shared-bike companies, which launched around 2017, decisively answered that question in the negative. The bikes were cheap, heavy and unreliable. Tyres were often flat, gears non-existent or rusty. In a hilly city such as Sydney, the experience was bad.

But the failure of Ofo, oBike and Reddy was not enough to deter investors.

The last decade was a fabulous time to launch an ambitious company that looked good on paper. Interest rates were so low that people and institutions with huge piles of cash in need of a return were looking further afield. Speculative technology investing, via venture capitalists that back nascent companies, seemed a good idea. Because there was so much money floating around, failures were few and investors looked smart. The focus for years has been revenue growth at all costs. Turning a profit was for later. 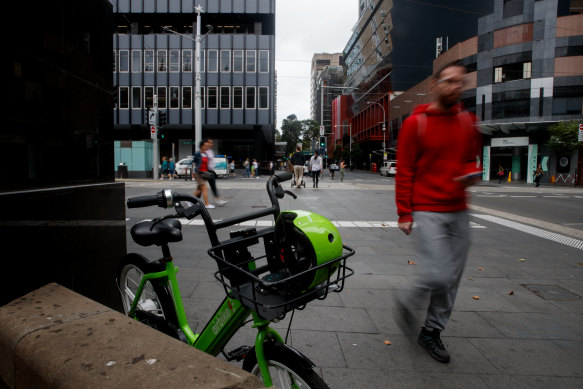 So it was in that context that investors backed the new electric bike-share companies, who have a set of arguments about why they are different. Their bikes propel themselves, so hills are less of a concern, and more customers will want to ride them, they say. They’re heavier, so unless a steroid-addled influencer wants to throw one in a river, they should not end up in absurd places. And they are more expensive, so companies have a much greater incentive to keep them in good condition.

Sydney looks like a decent market. Its inner suburbs are rich and densely populated. Unlike most cities globally, operators don’t need a government licence to operate. There is also the lure of a lucrative licence to run e-scooters, which Transport NSW is slowly trialling with some councils. Because scooters are more novel to ride and more comfortable for people in skirts, heels or suits, operators say they generate three to five times more rides per vehicle than bikes. But having bikes first suggests an operator is committed to the city, which they hope could put them in the box seat for scooter contracts.

For any given operator, survival will depend on their competence and  depth of their pockets.

Fair points, and logical, but there aren’t many industries where one can’t make at least some arguments for why they make sense (maybe even crypto!). That doesn’t mean the arguments are right or that the industry will be durable and useful.

The first thing they’re up against is called the network effect. Usually, this is a positive thing for a company because it means that the more people who use it, the more useful it becomes. Take Instagram. If everyone is there, it’s more enjoyable. The same is true of the bike-sharing companies. If there are more bikes around, it is easier to find one when you need it, so more people will use that service. That means they can put more bikes on the street. But the problem in Sydney is that there are six operators – a number that even plenty of people in the industry acknowledge is too many. No one will get the benefit of the network effect while there are so many vying for supremacy.

Which brings us to the second challenge: a classic tragedy of the commons. The bike-sharing operators put their bikes on city footpaths. That is a resource that everyone who lives in Sydney pays for via their council rates in return for being able to walk there, and lock up their personal bike, or chain up their dog, and so on. But it is not designed as a space for private companies to make money. That is what private property is for. But the law doesn’t work that way. It treats shared bikes like any other bikes. So the bike-sharing companies put their bikes there, earn money from them, and pay nothing for the privilege.

A lot of things annoy people about bike-sharing. Some of it is not economic, like the common bias against bike riders, but some of it is born of this feeling that the bike-sharing companies are using something they aren’t paying for.

This doesn’t mean bike-sharing is doomed in Sydney, but most of the companies operating here will not last long.

For any given operator, survival will depend on their competence and depth of their pockets. But the industry as a whole should look to Melbourne, which has managed this good new form of transport much better.

After the debacle of share bikes ending up in the Yarra, the government cracked down. Now the only operators have agreements with local government. Lime and Neuron have a trial contract to run their scooters in the City of Melbourne, Yarra and Port Phillip councils areas and Lime has the right to run e-bikes too. They pay councils to run scooters, which have software-enforced go-slow and no-go zones, in their areas. The schemes are not perfect, with complaints and injuries from some pedestrians, but they are a long way ahead of Sydney, where the state government has mostly sat on its hands, save reforming the laws on abandoned bikes.

Three and a bit years ago, venture capital fund Square Peg explained why it had backed Neuron, one of the shared bike and scooter companies. Neuron’s founders, Square Peg investor Tushar Roy wrote, they had realised that local governments were cracking down quickly and decisively against the scooters overrunning their cities. So, the companies that would succeed, they concluded, were those that could work with governments.

“The thesis is simply that in a regulated market, companies with the best holistic offering encompassing product, price and partnership with local authorities win.”

Prophetic, but it does sound a lot like an argument for public transport.

Coronavirus could soon be tested by sneezing onto your phone