Oliver (played by Emmanuel and Jeremiah Cheetham) has been at the centre of a harrowing child illness storyline on Coronation Street over the past few months after displaying concerning signs something was wrong since the beginning of the year. Parents Leanne Battersby (Jane Danson) and Steve McDonald (Simon Gregson) have been by his side in hospital after the youngster was admitted following several uncontrollable seizures. During Wednesday’s instalment of the ITV soap, the pair were told the diagnosis of a mitochondrial disease means their son will have difficulty with cognitive function. However, some viewers became distracted from the drama on screen as they seemed to notice a set blunder.

Weatherfield General Hospital has been the focal point of many storylines on the cobbles-based soap and is a setting which will be used more regularly as Oliver’s plot continues.

Angie Bailey (Lorna Laidlaw) has also taken a position as a nurse in recent months, meaning she will be on hand to offer medical support to the family.

Of course, these scenes aren’t actually filmed in a hospital, but rather a study which cameras can workaround to get their shots.

However, producers work hard to ensure the mirage isn’t spoilt and do everything they can to make it seem the environment is in the real world.

Wednesday night’s episode did cause a bit of confusion though when it seemed reality had just slipped through as fans spotted a blunder. 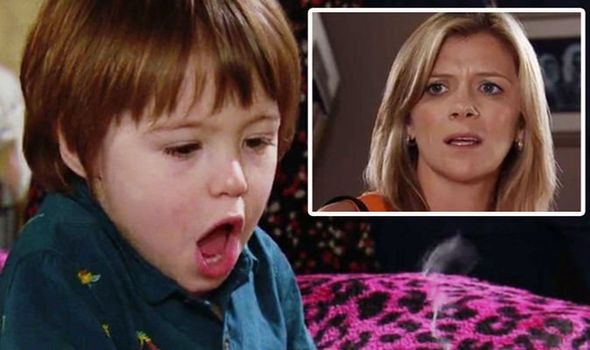 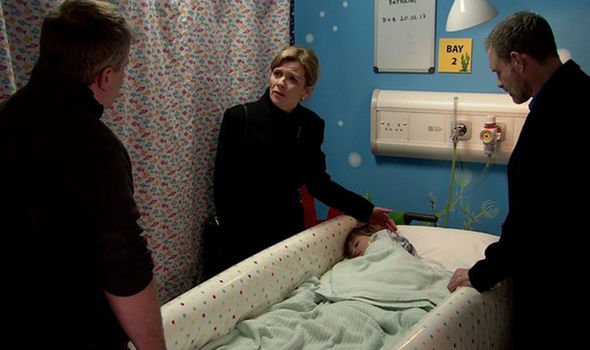 The moment came as Leanne and Steve had just been given an update on their son’s condition and it was the time for an advertisement to play out.

To cut between the two scenes, a sign for Weatherfield General Hospital was displayed.

Eagle-eyed fans noticed something different about another bit of the background as they spotted what seemed to be a sign for studio two, signifying this was a set.

Taking to social media, viewers of the ITV soap couldn’t believe what they’d seen and commented on what they believed to be a blunder. 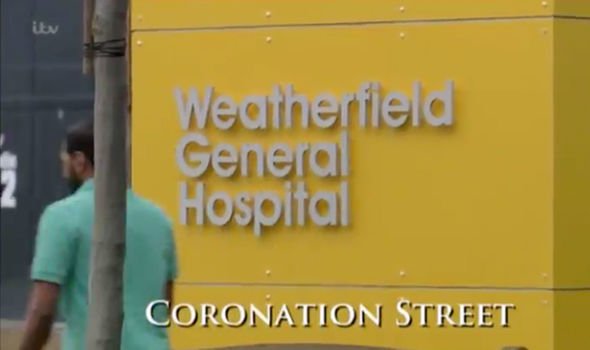 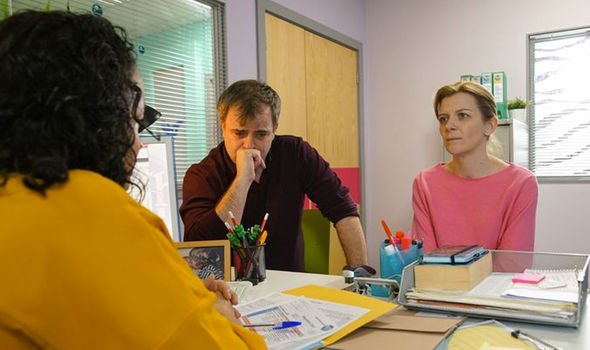 Weatherfield General is nowhere near Studio 2

One clued up viewer wrote on Twitter: “Weatherfield General is nowhere near Studio 2, honest,” and they weren’t the only one.

A second added: “I love how you can tell that from the outside that it’s just a sign which reads Walford general hospital which is just put up outside the Corrie studios.”

Whilst a third commented on the micro-blogging site: “Weatherfield you mean?” pointing out the location error.

No matter the blurred lines between drama and reality, the coming weeks will see Oliver’s parents come to terms with their son’s illness.

Viewers have already seen the first signs of how the toddler will be affected by the mitochondrial disease diagnosis.

After suffering multiple seizures, it seems the child now has problems with his vision, which the doctors explained had come as a result of the distress caused to the brain.

Although Steve is trying to stay strong for his son, Leanne is currently unable to contemplate Oliver has a possible life-limiting illness.

At present, she thinks there could be hope the youngster will get better, but there is currently no cure.

Mitochondrial disease is the name given to a condition whereby the mitochondria in the cells of the body do not produce enough energy to enable everyday functions.

As time goes on, viewers and the characters will learn more about the debilitating illness and what it means with regards to an individual’s lifespan.

Executive Producer Iain MacLeod told press, including Express.co.uk: “Above all, we wanted to do justice to the stories of the many thousands of families who have to deal with diagnoses similar to Oliver’s, be it a mitochondrial disorder or another life-limiting condition.

“It is something that, as a society, we find difficult to talk about but which is all too common. The taboo around these illnesses can mean awareness is low, which means funding for research is low.”

If you have been affected by Leanne and Oliver’s storyline, please visit the Coronation Street advice page here for more information and support.

Ask Yourself These Questions Before Introducing Your +1 to La Familia