The waitress joins the soap this week and pursues a romance with Craig after giving him her number in tonight’s episode (May 7), devastating Bethany who hoped the pair could rekindle their romance.

Alas, it seems Kayla may have different – and possibly more sinister – motives in store, as she keeps her true identity concealed.

See a preview clip of her arrival below:

As we’re sure will soon be revealed, Kayla is actually the daughter of PC Neil Clifton (Ben Cartwright), who played a huge role in Bethany’s grooming storyline last year.

Neil was closely involved in Bethany’s dark story as he began abusing his position in the police force to keep Nathan and the sex ring out of trouble. 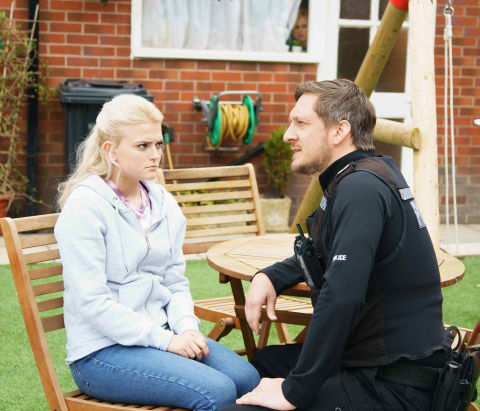 Neil was ultimately sent down for his crimes in October, but Bethany was left shocked earlier this year when she learned that he was planning to appeal against his conviction.

So, what is Kayla after?