Dev (played by Jimmi Harkishin) has been a beloved member of the Coronation Street community since he arrived on the cobbles in 1999. As well as being a ruthless businessman, sometimes being more invested in his empire than his family life, he is also a fiercely protective father. When it comes to one of his children being tormented, he jumps into action as ITV soap viewers saw last night as he tried to get the place involved in Asha’s (Tanisha Gorey) sex tape scandal. However, will he resort to leaving Weatherfield with his daughter and her twin brother Aadi Alahan (Adam Hussain)?

Over the last couple of weeks, viewers have seen the backlash Asha has received from giving her boyfriend Corey Brent (Maximus Evans).

Although it wasn’t the schoolboy who leaked the images online, with Kelly Neelan (Millie Gibson) sharing the sexual pictures on social media out of revenge, his girlfriend has cut herself off from everyone after becoming the victim of online abuse.

The youngster’s father did go to the police, but was told given all the people involved were children and the difficulties of the powers they held over taking images down off the internet, it seemed the teenager wouldn’t get justice.

Knowing his daughter will be taunted for her actions as the images have made their way onto a dodgy site, Dev could see their way out would be for the whole family to up and leave for a while. 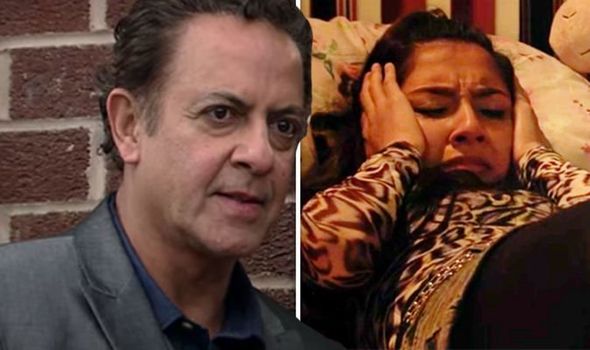 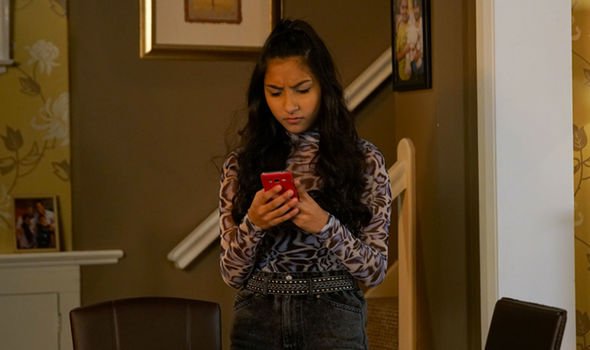 National children’s charity NSPCC has been working with the soap to accurately portray their reality of Asha’s ordeal and the repercussions of her actions.

Speaking exclusively with Express.co.uk, Alana Ryan, NSPCC Senior Policy Officer, explained how the impact of online abuse and sexting can have a huge effect on the family.

“It can be a huge shock to a parent to find out their child has been sexually communicating with a peer, but we know that technology is increasingly playing a role in relationships – for example, over 2,500 children contacted Childline about sexting and non-consensual image sharing in 2017/18.

“Sometimes parents and siblings will be concerned about how this reflects on them, but this isn’t a helpful attitude – the needs of the child affected should be put front and centre.

“Parents should be actively seeking to talk to their kids about sexting and what digital consent looks like.” 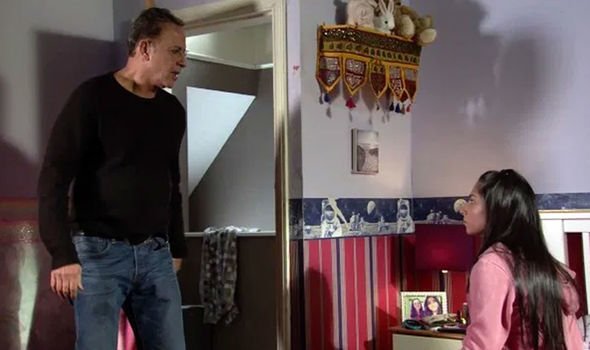 This will be a worrying time for the whole family

Alana added: “This will be a very worrying time for the whole family, who will all need support to get through this rather than judgement.

“We all have a shared responsibility to tackle victim-blaming and ensure that young people understand that they have a right to be treated with dignity and respect in a relationship.”

Dev sought professional help for his teenage daughter over her self-esteem issues when she was trying to lighten her own skin last year.

Before the sex tape scandal landed on their doorstep, the father-of-two saw real progression from the youngster.

Knowing this could be a setback for her and knowing being in Weatherfield will only bring more turmoil, the shopkeeper might decide to seek help elsewhere.

However, like the Alana explained, families also need support as well as the victims.

Given this and not wanting his daughter to be on her own or to feel rejected, Dev could decide to go with her as well as taking Aadi so they can face the process together.

Viewers will have to wait and see exactly what happens, but the storyline has brought to the forefront a real topic issue faced by many young people.

Of course, sexual images online are a huge violation of privacy and would make someone feel a whole range of emotions.

As Alana says, the victim can often feel “guilty, worried or even ashamed of what’s happened,” leaving them vulnerable.

“The key thing is that it isn’t that child’s fault, nobody has the right to share images without consent and as a society, we need to challenge victim-blaming narratives that can prevent children coming forward,” she added.

“It is never okay for someone to record or take images of someone without their consent.

“When someone is under 18 it’s against the law for anyone to save or share a sexual image or video of another person. Even if it’s a selfie or they’re under 18 too.”

If you or anyone you know has bee affected by the issues in this storyline, then please find help and support on the NSPCC website or call the charity Childline service on 0800 111.

The Singapore Grip cast: Who stars in the ITV period drama?

Girl took own life after being teased about break-up, inquest hears