In her 2008 documentary “The Order of Myths,” director Margaret Brown explores segregated Mardi Gras celebrations in Mobile, Alabama. In the process, she also deals with the last slave ship, the Clotilda, which was sunk in the Mobile Bay over 160 years ago. She never expected to return to that story — and then “Descendent” happened.

After “The Order of Myths,” Brown was drawn like a magnet to the unfolding search for the Clotilda, along with her “The Order of Myths” consultant, African American studies professor and folklorist Kern Jackson, who became the co-writer and co-producer of “Descendant.” “We never stopped talking,” Brown said.

In early 2018, in Africatown, they found the wrong ship, the Notilde, but the news went global. One morning in Los Angeles, SXSW impresario and film producer Lewis Black told Brown: “Margaret, are you crazy? You need to go back!”

He wrote her a check at breakfast and she was on a plane to Mobile the next morning. Four years later, the movie premiered at Sundance, where it was acquired by Netflix and Barack and Michelle Obamas’ Higher Ground Productions — but that happy outcome was never a surefire thing.

Back in 2018, Brown was well on her way with the new documentary when she came to the dawning realization that the balanced portrait she had planned of the story of Africatown, near her hometown of Mobile, wasn’t going to happen.

She had assumed that she would be able to interview people on all sides of the story, as she had with  “The Order of Myths.” After all, she had talked to many of the white families she wanted to interrogate again — including, most critically to her story, the Meahers. In 1860, their ancestor brought the Clotilda into Mobile Bay, burnt it, and sank it. Some of the surviving Africans were sold into slavery; others ran into nearby forests. Their descendants bought the land that became Africatown.

Years ago, Brown’s mother told her that the ancestor of Helen Meaher, the young queen of Mardi Gras that year, was Clotilde slave trader Tim Meaher. “It was lore in Mobile,” said Brown in a recent interview over Zoom. “Now they found a boat, and in white Mobile it was like a whisper campaign. You didn’t talk about it.”

Brown has a complex relationship to Mobile. After graduating from Brown University, the Austin-based filmmaker has focused her three features and numerous shorts on the city, where she frequently checks in at home. “Even though when I was finishing high school, and we were in college, I wanted to get as far away to the most liberal place I could find, I am quite obsessed with where I’m from, and the complexities of it,” she said. “The things that repelled me growing up, that I thought were so conformist, I am curious to examine — and see what I find.” 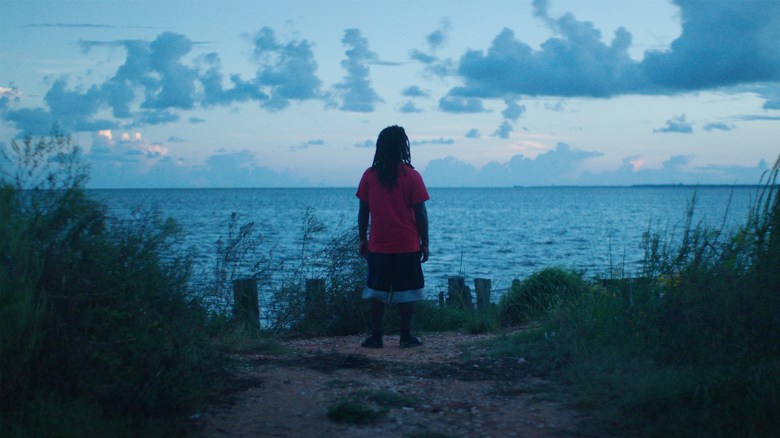 When she circled back on the Clotilda story for “Descendants,” the first order of business was lining up the cast of characters to tell the story of Africatown, from Clotilda descendant Veda Tunstall and marine archaeologist and diver Kamau Sadiki to Emmett Lewis, the great-grandson of Clotilda survivor Cudjoe Lewis. In the documentary, Emmett reads from late Zora Neale Hurston’s interview with Cudjoe in the posthumously-published “Barracoon,” which tells the story of his great-grandfather.

But archive research also yielded Cudjoe footage shot by Hurston herself. “Every scrap of film I found from Zora Neale Hurston,” said Brown. [“I thought”], ‘she’s such a good shooter.’ It’s like nuts how good she is. I knew very early on, I wanted ‘Barracoon’ to be a thread throughout the film, with people reading from it. I just got obsessed with her, the complexity of her voice, which was something I needed to forefront in the telling of the story.”

If Brown couldn’t get someone to participate, she just kept going back. But eventually she had to face facts. Even though Helen Meaher text messaged her, none of the Meahers would go on the record.

“I did think the Meaher family would talk to me when I started,” said Brown. “That’s one of the reasons I decided to make the film, because I was thinking, ‘if I’m going to make a film, it should be about whiteness.’ If I had known what would happen, I would have not started. I thought because Helen Meaher was in my other film and had traveled to Sundance and to other countries with that film, that she would be in this film, even though that family wouldn’t speak to anyone else openly about the Clotilda, once there were murmurings that they were finding it. Radio silence. I was wrong when it came to this. No, still I was not let in.”

This meant that Brown, a white filmmaker, was now telling a story about Black Africatown. She relied on producers, S.C. Chambers and Kern Jackson, who are Black, and Kyle Martin, who is white, to help tell the story. She also shared some footage with her subjects, which was a first for her. “I feel like I have blind spots as a white person telling a Black story,” she said.

Brown felt a great responsibility to the community “to be the vessel for their story, especially as a white person,” she said. “I made this film very collaboratively, very different than my other projects. I would like to believe that anyone can tell any story they want to, but I also think they should think about why they’re drawn to the story, why they should tell that story. They should really think about it.”

“Descendant” has been lauded in some quarters: from Sundance’s U.S. documentary special jury award for creative vision, to nominations from the Cinema Eye Honors (Best Director, Outstanding Original Score), and the Critics Choice Documentary Awards (Best Documentary Feature, Director, and Best Historical Documentary), as well as inclusion on the influential DOC NYC Short List. However, the film was notably overlooked by the IDA Awards. Will the Academy’s documentary branch suggest that Brown should not have told this Black story? We shall see when the Oscar Shortlist is announced on December 21.

One positive sign is that at Sundance the Obamas came on board with their Netflix label Higher Ground, as they did with “American Factory,” the eventual Oscar winner. Additionally, during post-production, Amir “Questlove” Thompson — a Clotilda descendant — joined the project as an executive producer, about a year after his Oscar-winning directorial debut, “Summer of Soul,” made its own Sundance premiere.

Another member of The Roots, Ray Angry, joined forces with Rhiannon Giddens and Dirk Powell, to compose much of the score, while Questlove’s company Two and Five has been involved in Participant’s impact campaign. “They’ve definitely been very vocal on decisions,” Brown said. “Questlove has a lot of political opinions.” As the film was being completed, Questlove met his family over Zoom. “Questlove meeting his relatives was incredible to watch,” Brown said.

The Clotilda was a key character in the film, and Brown knew it would be an alluring way to engage audiences in her narrative. “When I started meeting people, I felt like they all knew the ship was there,” she said, noting how many people had grown up with stories about their ancestors. “So it was obviously true — if they find it, that’s going to be this huge plot point.”

One of the most poignant moments in the film shows a roomful of people, including many Clotilda descendants, standing in front of a large model of the slave ship, taking in the hideous geography of what their ancestors endured. Brown’s cameras captured the reactions on the faces. “The whole film could be that scene,” she realized at the time. “I was trying to maintain composure and not show expression during the shooting; that was extremely difficult for the crew.”

In the editing room, Brown had to make decisions about how to play out what they saw. “There were some things we didn’t even put in,” she said. “Tone-deaf things that white people said in the room: ‘Like really? Did you just say that?’ How much of that can you put in the movie? So there were a lot more moments like that.”

Finally, in a statement to Clotilda descendants released to NBC News by email on October 15 around the release of the movie, Meg and Helen Meaher responded to “Descendant.” Their ancestor Timothy Meaher’s actions, they stated, “were evil and unforgivable and had consequences that have impacted generations of people. Our family has been silent for too long on this matter. However, we are hopeful that we — the current generation of the Meaher family — can start a new chapter.”

In a responding statement from the Clotilda descendants, they expressed hope that the Meahers would share any “historical documents, artifacts, or oral history that could bring clarity” to the ongoing narrative.

Brown said she has learned a lot about making documentaries on people who don’t share her background. “It’s about really truthfully looking at ‘What are your biases? What are your blind spots?’” she said. “Are you open to listening to someone who might not see things the way you do?”

“Descendant” is now streaming on Netflix, along with Brown’s earlier “The Order of Myths.”

Temporary Bureau of Land Management director to continue through May 5

8 Parachute Pants That Will Elevate Your Street Style