Home » TV & Movies » Donald Trump Falsely Blames “Illegal” Votes, MSNBC Cuts Away As He Claims Without Evidence He Was Cheated

Donald Trump falsely blamed “illegal” votes as his path to another term narrowed on Thursday, claiming without evidence that he was being cheated out of a victory by Joe Biden – a bridge too far for at least one cable newser.

“They are trying to steal the election, they are trying to rig an election, and we can’t let that happen,” he griped about the results in Michigan, won by Biden, in an appearance in the White House briefing room. It was his first time before the cameras since early Wednesday morning, when he was in a far more celebratory mood. Watch the video below.

Ahead in the popular vote and in the Electoral College, former VP Biden is within striking distance of the presidency as more and more votes in battleground states are going his way.

“If you count the legal votes I easily win,” Trump said at the outset. “If you count the illegal votes, they can try to steal the election from us.” He appeared to be talking about mail in ballots, which have heavily favored Biden but have long been a legal part of the electoral process.

He also claimed, without evidence, that polls showing a potential “blue wave” were a suppression tactic.

While CNN and Fox news carried Trump’s remarks in their entirety, but MSNBC took just the start of his statement. The three broadcast networks, CBS, ABC and NBC, also carried the speech, but the Comcast-own outlet joined its cable cousin in the last few minutes and cut away.

Within a few minutes of Trump talking, MSNBC anchors Brian Williams and Ari Melber went to a live fact check of the former Celebrity Apprentice host’s outrageous remarks. Melber then finished an interview with Arizona Secretary of State Katie Hobbs.

“A number of the networks stayed with the President’s comments that he’s been cheated out of a victory, there were phony polls designed to keep people at home,” said Williams to fellow anchor Rachel Maddow right afterwards. “We’ll get a read-out, a summation of the points he is still making from the briefing room,” the former NBC Nightly News frontman added, before going to instead look into where the votes stand in the battleground states. That was followed by a commercial break, but no more Trump on the cabler newser. 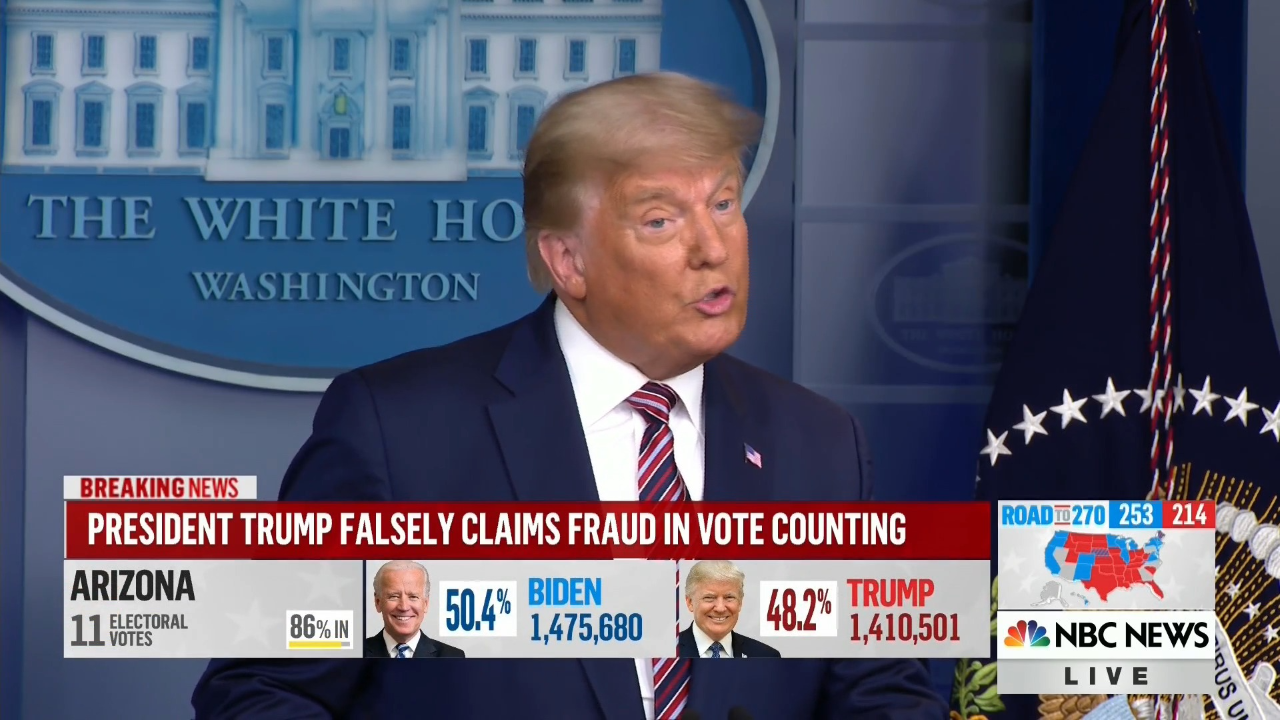 Over on NBC, Lester Holt said, “We are watching President Trump speaking live from the White House and we have to interrupt here because the president made a number of false statements including the notion that there has been fraudulent voting. There has been no evidence of that. Allegations by his campaign but his campaign spokespeople unable to provide any evidence. He also has suggested that the polls and many of which were incorrect were somehow the product of election interference.”

From the White House brief room today Trump also vowed to pursue legal action, even to the Supreme Court. “We think we will win the election very easily, we think there will be a lot of litigation,” he said.

Trump said during the campaign that the only way that he thought he would lose was if the election was rigged. He followed through with that claim, but there is concern that his attacks on the integrity of the process will only trigger unrest among some of his most fervent supporters. Earlier in the day, Trump’s son, Donald Trump Jr. wrote on Twitter, “The best thing for America’s future is for @realDonaldTrump to go to total war over this election to expose all of the fraud, cheating, dead/no longer in state voters, that has been going on for far too long.” Twitter then slapped a label on the tweet.

After the president ended his remarks, CNN’s Jake Tapper said, “What a sad night for the United States of America.” Tapper called the scene “ugly” and “pathetic.”

Anderson Cooper said, “That is the president of the United States. That is the most powerful person in the world. We see him like an obese turtle on his back flailing in the hot sun, realizing his time is over.”

Here is Trump’s speech in its entirety. His remarks begin at the 18:10 mark:

Elizabeth Warren Just Trolled The ZUCK Out Of Facebook!

ITV Content Boss Kevin Lygo Brands Jeremy Clarkson Column “Awful” But Says He Will Remain Host Of ‘Who Wants To Be A Millionaire?’

The TV show David Astle couldn’t escape is back, with some twists