Eugenio Caballero can conceive an enchanted forest and a disaster zone with equal levels of meticulous ingenuity. He can just as deftly recreate the space where an intimate memory occurred many decades ago, or a surrealist dream where reality and fantasy meet.

The Oscar-winning Mexican production designer learned his profession the way old trades are passed on: as an apprentice absorbing knowledge from more seasoned artisans on the job. Today, his inhabitable fabrications enrich the frames of larger-than-life epics around the globe, as well as unassuming independent dramas in his home country.

“The decisions that I make now are not based on my personal taste, but based on what the story requires,” Caballero told IndieWire during an interview at the Virginia Film Festival, where he received the festival’s 2022 Craft Award. “That’s when you realize the narrative power of the craft.”

Given his world-building dexterity, Caballero is the rare craftsperson to have collaborated with all three of the acclaimed Mexican directors known collectively as The Three Amigos: with Guillermo del Toro on “Pan’s Labyrinth,” with Alfonso Cuarón on “Roma,” and now with Alejandro González Iñárritu on “Bardo, False Chronicle of a Handful of Truths.”

“They are demanding and detailed-oriented, but I’ve felt plenty of creative freedom with them,” Caballero explained of his experiences working with his fellow Academy Award winners. “I’m also very obsessive, and that’s probably what attracts them to my work as well.”

A cinephile from a young age, Caballero grew up in Mexico City admiring the spectacle cinema of American filmmakers. Like many from his generation, he was captivated by Steven Spielberg’s “Indiana Jones” films and George Lucas’ “Star Wars.” At home, he found another influence in the films from the Golden Age of Mexican cinema, which his family would watch on TV every afternoon while eating dinner.

One such Mexican classic, Roberto Gavaldón’s eerie “Macario,” became repeat viewing over the years. As he got older, Caballero understood that legendary cinematographer Gabriel Figueroa and art director Manuel Fontanals were responsible for the evocative visuals that made the film — set on the eve of the Day of the Dead celebration — so memorable.

“Most people don’t know much about what art direction is, but if you analyze it, sometimes when they talk about the cinematography, what they are really responding to is the production design,” he said. He cited an example from “Macario,” in which the title character enters a cavern covered in candles that represent human lives — the slow extinguishing of which creates an otherworldly effect. “The candles were Fontanals’ idea,” Caballero said.

Despite his love of movies, a teenaged Caballero was unsure of taking a gamble on a career in filmmaking — it was the late 1980s, when yearly film production in Mexico only amounted to a small handful of features. He considered studying law instead, and traveled to Florence, Italy for a year on an art-history scholarship, but the prospect of working in a museum or academia pushed Caballero into “a deep crisis.”

Lacking financial stability and concrete aspirations, Caballero accepted an opportunity to work on a film set. That first foray into production opened further jobs on commercials and music videos, which led him to completely abandon formal education. “I realized that this was my profession, and things started going well while I was still very young,” he noted.

Working first as an art department assistant, Caballero learned to compose visually attractive sets with few resources through diligent location scouting and constructing objects or elements that would enhance the spaces. With time, he started taking the lead on some projects and to assist on larger ones under the guidance of experienced production designers such as Gloria Carrasco or the late Brigitte Broch, who hired Caballero as part of her set decorating team on Baz Luhrmann’s Mexico City-shot adaptation of “Romeo and Juliet.” He received his first production designer credit on the 1999 Mexican drama “Santitos,” but it was Ecuadorian director Sebastián Cordero’s thriller “Crónicas” that would set the stage for a major breakthrough in Caballero’s journey.

Produced by Guillermo del Toro, his producing partner Bertha Navarro, and Alfonso Cuarón, “Crónicas” was an international co-production that entailed a complex shooting schedule in the small Ecuadorian town of Babahoyo with scarce funds. Impressed with Caballero’s resourcefulness, del Toro asked him to join “Pan’s Labyrinth” before there was even a screenplay for the dark fairytale set against the backdrop of the Spanish Civil War. Stunned by Del Toro’s lucid description of the film’s world, Caballero spent the next five months researching. “I thought, ‘I have to really prepare for this movie,” he recalled.

A firm believer in research, Caballero creates detailed look books for all his projects in order to compile all of his ideas, sketches, and references to be able to clearly communicate them to his team. They include intricate notes on color, form, and texture of everything in the frame. “All objects and all spaces have these three elements,” he said. “It’s about how you utilize them to provoke a certain emotion in the spectator. That’s how you, from your trench, can support what the director is trying to tell.”

While del Toro wrote “Pan’s Labyrinth,” Caballero compiled his look book: Images from the period, images of war, fantasy concepts, and art by Victorian illustrators who influenced the director. He researched the landscapes and legends of the north of Spain, and historical elements like coins, prices, and windmills. Upon receiving these materials, del Toro joked: “Good thing you are a production designer, because this book looks like it belongs to a serial killer. The world was spared.” 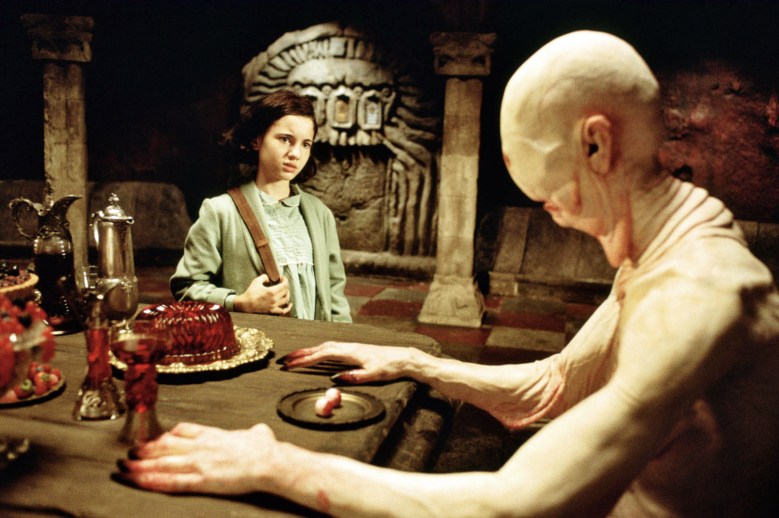 Caballero’s dazzling work on “Pan’s Labyrinth” — devising fantastical environments with a grounded, organic quality to them — earned him the Academy Award for Best Art Direction alongside set decorator Pilar Revuelta. The film also took home the honors for Best Cinematography and Best Makeup, but he maintains mixed feelings about that night. “It was bittersweet for me because while we won three Oscars for the technical elements of ‘Pan’s Labyrinth,’ Guillermo [del Toro] didn’t win any,” Caballero said.

Based on the success of “Pan’s Labyrinth,” Caballero received multiple offers to work in Hollywood, but most involved fantasy and superhero stories. Afraid of being pigeonholed, he instead opted for returning to Mexico and working on Carlos Cuarón’s comedy “Rudo y Cursi.”

“A lot of people told me, ‘You are going to miss your opportunity. This might be your first and only chance in Hollywood and you might miss it because you are doing smaller or auteur films,’” he said. But in the end, Caballero’s choices landed him notable credits on films directed by Jim Jarmusch (“The Limits of Control”), Floria Sigismondi (“The Runaways”), and J.A. Bayona (“The Impossible,” “A Monster Calls”). 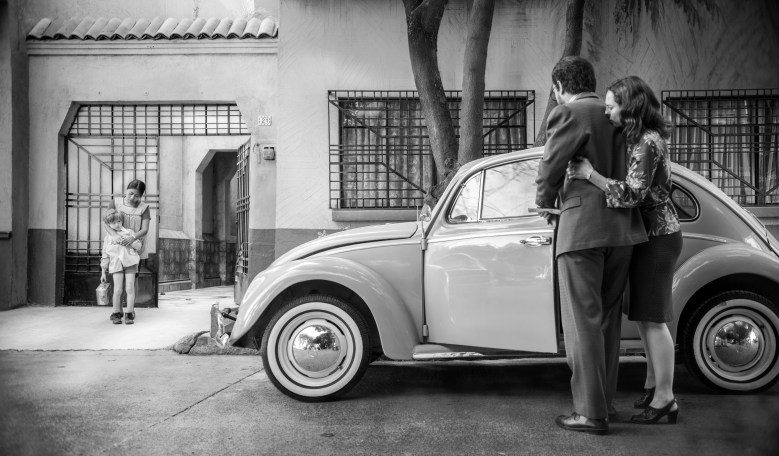 Caballero was further expanding his creative horizons — working on the opening ceremony of the Sochi 2014 Paralympics Winter Games, and designing the Cirque du Soleil show “Luzia,” inspired by the Mexican culture — when Alfonso Cuarón invited him to work on “Roma.” Cuarón’s semi-autobiographical, black-and-white period piece didn’t have a script yet, but he spoke with the production designer about the film’s themes, and the minutiae within a scene that could trigger a memory.

“Unlike other movies, ‘Roma’ was built from the details,” Caballero said. “We didn’t start thinking about how the house looked, but how the kid’s toys looked.”

When he and his team recreated Mexico City’s Insurgentes Avenue for “Roma,” they first conceived the inside of each storefront and then the façade, the signs, and the streetlights based on archival material from the 1970s. Part of the task involved experimenting with the color of the objects in each set so that they would properly read with distinct tones in black-and-white.

On “Bardo,” his first feature film with Iñárritu, Caballero received the script before any of the actors. Immediately, the production designer grasped the vivid color palette the director envisioned: few primary colors, lots of green, pale rose, and purple. These regulations on hues extended to most inanimate objects, as well as the clothing on the numerous extras.

For the dreamlike tale of Silverio Gama (Daniel Giménez Cacho), a prominent filmmaker returning to his homeland, several locations across Mexico City posed a significant challenge for Caballero and his Mexican team. Allowed to shoot in the majestic Chapultepec Castle, the site of a key battle during the Mexican American War, the team faced rigorous limitations to safeguard the historical artifacts, including the delicate carpets on the floor. They recreated the castle’s main tower, from which a heroic soldier is said to have jumped, at a 1:1 scale in a parking lot offsite, and then inserted those shots into the scene digitally. 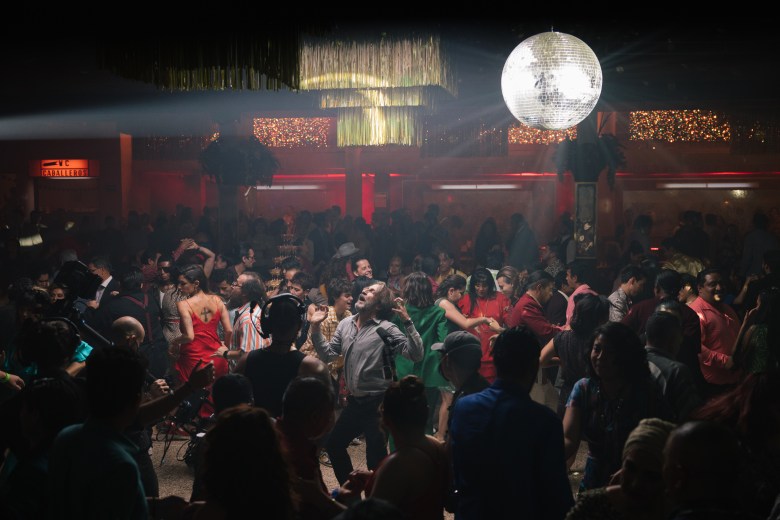 Behind the scenes of “Bardo, or False Chronicle of a Handful of Truths”

California Dancing Club, another key setting, had been closed for an extended period due to the COVID-19 pandemic. To restore this popular “dance temple” (in the production designer’s words) to its former glory, Caballero focused on preserving its working-class essence while adding sophisticated touches to turn it into a more enticing version of itself. They reinforced the structure and added hundreds of mirrors and massive chandeliers with adjustable lighting.

Perhaps the most incredible production design feat in “Bardo” is Silverio’s home. First built in a studio, where scenes were filmed chronologically, the large structure (featuring the main hall, the living room, and the dining room) was later transported over a thousand miles north to the desert town of Melitón Albáñez Domínguez in the Mexican state of Baja California Sur. Ultimately, rain forced them to move to the El Vizcaíno Biosphere Reserve.

Behind all of these decisions, with varying degrees of complications, lies Caballero’s desire to employ his craft to elevate the narrative, and support the performance of the cast via the physicality and believability of the spaces where the drama comes alive for the camera.

“Of course, things have to look good, they have to be truthful and make sense, but for me what’s essential in production design is to help the actor construct their character by placing them in situations that feel as real as possible within the fiction,” he added.

Furious Cornish villagers on historic estate face being made homeless

Twitter suffers partial outage in another blow to Musk